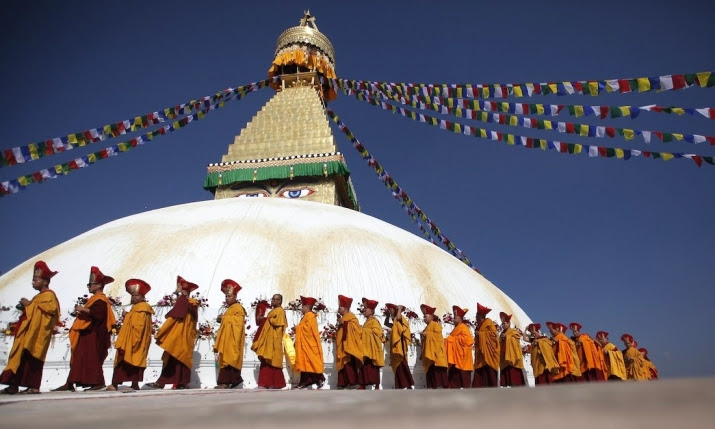 Buddhist monks perform the purification ceremony for Boudhanath Stupa. Photo by Niranjan Shresth. From the guardian.comThe Buddhist stupa of Boudhanath dominates the skyline. The ancient Stupa is one of the largest in the world. The influx of large populations of refugees from Tibet has seen the construction of over 50 Tibetan Gompas (Monasteries) around Boudhanath. As of 1979, Boudhanath is a UNESCO World Heritage Site. Along with Swayambhunath, it is one of the most popular tourist sites in the Kathmandu area.

In a moving demonstration of the resilience and resourcefulness of the people of Nepal, the Boudhanath Stupa in Kathmandu was formally reopened to the public on Tuesday, some 18 months after the country was devastated by a massive earthquake and a series of deadly aftershocks that killed nearly 9,000 people and displaced millions with the destruction of homes and businesses—damage that extended to hundreds of historic monasteries, temples, and monuments.

The iconic stupa, a richly symbolic expression of the Vajrayana tradition and one of the holiest Buddhist pilgrimage sites in Nepal, was draped in colorful prayer flags and covered in flowers to mark the opening, which followed three days of purification rituals performed by Buddhist monks that began last Friday.

“I am here almost every day and was heartbroken to see [the stupa] damaged after the quake,” said 66-year-old Dawa Lama, who had come to the site to offer prayers. “But it is now open to us, I am very happy to see it standing tall.” (Channel News Asia) 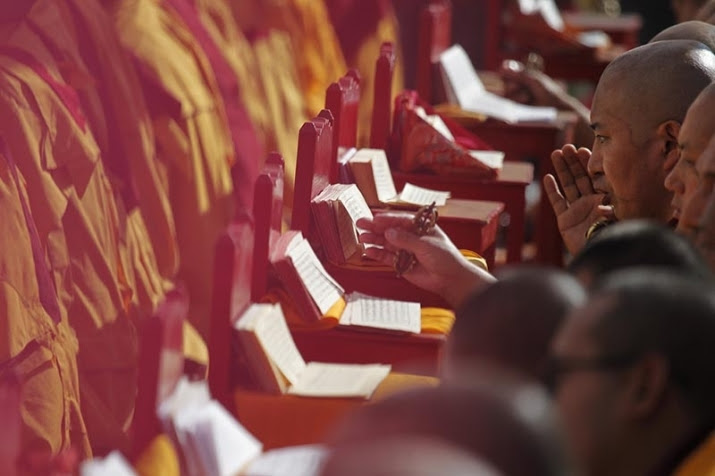 Listed as a UNESCO World Heritage Site in 1979, Boudhanath—the first major monument to be fully restored since the quake—is one of the largest stupas in the world, standing some 36 meters high. It is generally believed to have been founded by King Shivadeva (c. 590–604), although some chronicles date its origin to the reign of King Manadeva (464–505). Boudhanath lies on an ancient trade route from Tibet that enters the Kathmandu Valley through the village of Sankhu, to the northeast of the stupa. Today, it remains a center of Nepal’s Tibetan community, which has constructed more than 50 monasteries around the stupa, most of which also suffered significant damage during last year’s quakes.

“I could see it from my window every day. It was so sad,” said Ratna Bazra Lama, 63, who lives and works near the stupa. He expressed joy that the stupa was finally complete: “So we’re happy it’s been restored.” (The Kathmandu Post) 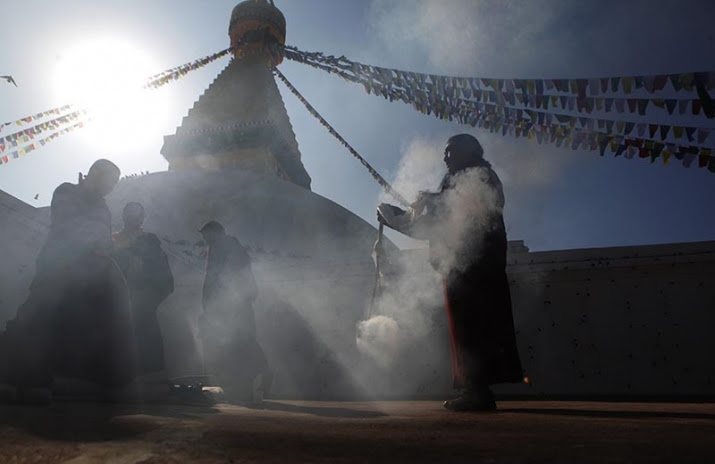 A monk carries incense around the stupa. From thehimalayantimes.com

The restoration effort, which began in May last year, cost a total of US$2.1 million and included more than 30kg of gold, according to the Boudhanath Area Development Committee that oversaw the project. The reconstruction was funded with donations from devotees and from Buddhist organizations around the world.

Artist Hom Bahadur Tamang, who has been selling his thangka paintings at the complex for 21 years, said business had been slow since last year’s tragedy, but he felt heartened by the reopening of the monument: “The reconstruction of the stupa has given us new hopes that we will rise again.” (Channel News Asia)

The government has been the target of a barrage of criticism over the lack of speed and effectiveness in its response to the disaster. Nevertheless, in a speech at the stupa, Nepal prime minister Pushpa Kamal Dahal praised the privately funded restoration effort as a demonstration of “proof that we can rebuild our heritage. This example puts pressure on us in government to reconstruct all the houses and temples that have been damaged.” (The Kathmandu Post) 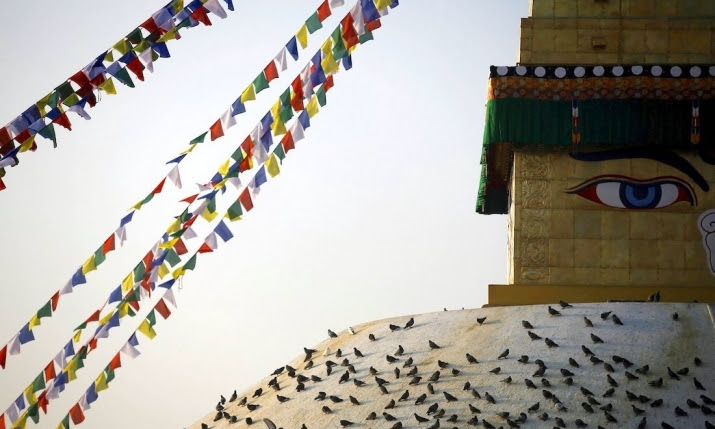 The newly repainted eyes of the Buddha are returned to their rightful place, their watchful gaze restored. From the guardian.com

Reconstruction work in the wake of the disaster, a mammoth task in itself given the extent of the devastation, has been hobbled by political red tape, inefficiency, and infighting—it took almost a year for the government to set up an earthquake reconstruction authority. As a result, an estimated 4 million people in this Himalayan nation were still homeless last winter. Eighteen months on and many are still waiting for government compensation to rebuild their shattered homes and millions face the prospect of a second winter without adequate shelter.

The Stupa is commonly known as Boudha or Boudhanath, meaning lord of Wisdom, It is a protective,purification and wish-granting stupa.