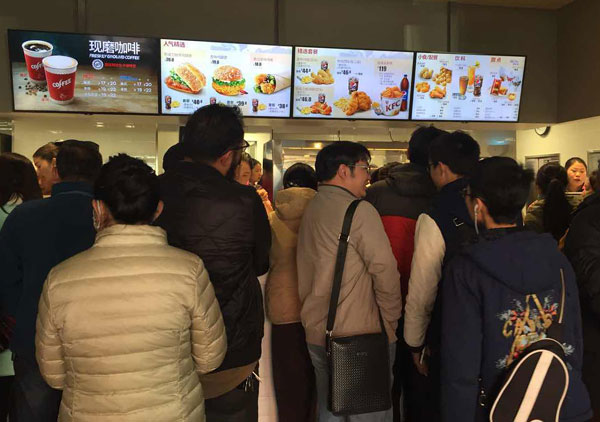 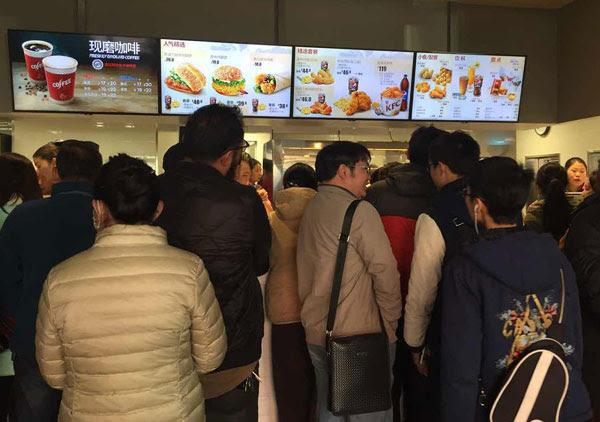 By Palden Nyima in Lhasa and Lin Shujuan in Beijing, China Daily, 10 March 2016

KFC has become the first Western fast food giant to open a branch in the Tibet autonomous region.

After its doors opened on Tuesday in Lhasa, more than 1,000 customers came to eat, according to store manager Yu Zhengqing.

It remained crowded on Wednesday, with locals forming long lines inside the restaurant and kids posing for photos in front.

Yu said they expect the store, which covers more than 500 square meters, to serve an average of 1,000 customers on normal days.

Food materials, including frozen chicken, are flown in from Xi’an, in neighboring Shaanxi province, which adds to the cost “and explains why the menu in Lhasa is priced higher than outlets in the other inland cities”, Yu said.

A sandwich meal with chicken wings, cola and French fries is 40 yuan ($6.10) in Lhasa, while it is 31 yuan in inland cities.

Despite the higher price, Yang Yanfang, a 23-year-old civil servant from Yunnan province who is working on a two-year project in Lhasa, found the branch appealing.

“It offers another pleasant dining choice for young people from the inland area like me who grew up with frequent treats of chicken and sandwiches,” said Yang, sitting at a table surrounded by green plants.

The store also incorporates local design elements like a large image of the Potala Palace and triangle motifs labeled with Tibetan mountain names in English.

“Previously, we only had Dicos,” Yang added, referring to the Chinese fast-food restaurant chain. Dicos has also been successful in Lhasa, according to Chen Biao, a manager with the Lhasa’s Shenli Shidai Square where the KFC store is located, illustrating that consumers in Tibet like the menu.

On Wednesday afternoon, most customers were under age 40, and half were local ethnic Tibetans.

“I hadn’t tried KFC before but it tastes good to me,” said Gonpo Tashi, a 29-year-old translator who works in a nearby company.

The new KFC also appeals to tourists, Chen said. Last year, Tibet recorded visits from 20 million tourists, a 29 percent rise from the previous year. It expects to attract 30 million by the end of 2020.

Currently, the outlet recruits 40 employees, half of them from Tibet, including eight ethnic Tibetans, Yu said.

“Recruitment is continuing,” Yu said. “Eventually, we hope the ratio between local ethnic Tibetan employees and non-Tibetans is even.”

In 2004, KFC shelved plans to open in Tibet, saying it was not “economically feasible”, according to Reuters. But spending power has continued to increase. Tibet’s GDP hit 102.6 billion yuan in 2015, maintaining double-digit growth since 1994.

KFC, which entered China in 1987, now has more than 5,000 outlets on the Chinese mainland.