An estimated 100,000 people attempt at least part of the 1,200km pilgrimage route each year. From mlit.go.jp

Pilgrimages have played an important part in Japanese religious practice since at least the Heian period. Typically centred upon holy mountains, particular divinities, or charismatic individuals, they are usually to Buddhist sites although those to the shrines of Kumano and Ise are notable exceptions.

Japan’s Shikoku region is petitioning to have a centuries-old Buddhist pilgrimage trail that includes 88 temples listed as a UNESCO World Heritage Site. The governments of Shikoku’s four prefectures and 58 municipalities have petitioned Japan’s Cultural Affairs Agency in their application, describing the sacred trek as “our nation’s typical form of pilgrimage.” (The Japan News)

The pilgrimage is closely associated with the renowned Buddhist monk Kūkai (774–835, also known, posthumously, as Kōbō Daishi), founder of the Shingon school of Buddhism, a major school of Buddhism in Japan and one of the few surviving Vajrayana lineages in East Asia. Born at Zentsū-ji (the 75th temple on the route) and known as a civil servant, scholar, poet, and an artist, Kūkai is famed for his calligraphy and for his work as a civil engineer. He is also credited with the invention of Japan’s phonetic, syllabic kana scripts, which have become part of the written Japanese language and is said to have introduced Tantric Buddhism to Japan after studying in China.

The Shikoku pilgrimage is reputed to have been founded in Kūkai in 815, although the actual historical circumstances are unclear. The first known reference to this theory is in a Meiji-period (1868–1912) document authored by a monk affiliated with the Shingon school. Many of the 88 temples along the route are also believed to have been founded by Kūkai. 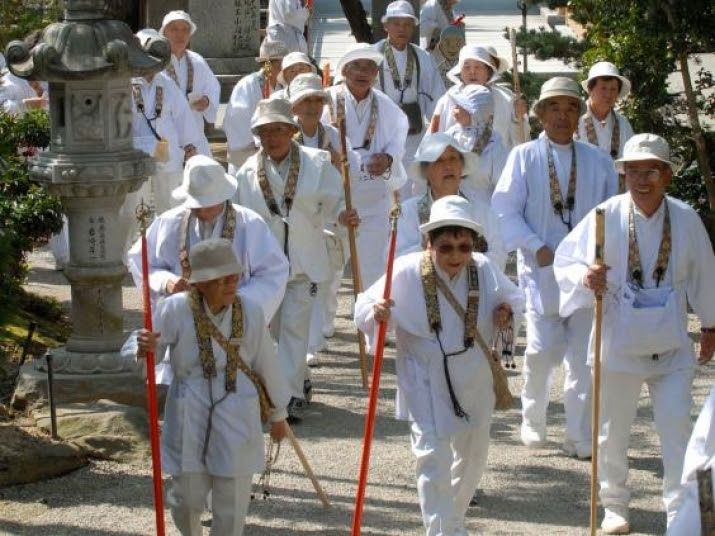 The pilgrimage route encircles Shikoku, the smallest of Japan’s four main islands, covering some 1,200km. Pilgrims (known as henro) who undertake to walk the entire length of the pilgrimage can expect to spend 30–60 days to reach the end, although approaches to undertaking the pilgrimage are extremely flexible—it’s not necessary to visit the 88 temples in order; henro are welcome to begin and end their pilgrimage at any point along the route and some people spread their journey out over many years. Many modern pilgrims also use cars, buses, bicycles, or motorcycles to navigate the route.

The pilgrimage is “characterized by its casual nature, and anyone can start it from anywhere and at any time,” said Masato Mori, associate professor of cultural geography at Mie University in central Japan and the author of a book on the famous pilgrimage. (The Japan News)

Shuji Matsuki, 67, the secretary-general of a citizen’s group in Matsuyama that is helping to promote the initiative for UNESCO recognition, views the flexible nature of the pilgrimage as one of its strengths: “We hope to promote the ritual as something that represents a culture of coexistence because it welcomes anyone from any religion.” (The Japan News)

The number of the temples included in the pilgrimage has changed over the years. Documents from Japan’s Kamakura period (1192­–1333) list 33 temples along the route, but the total had expanded to 88 by the Edo period (1603­­–1867). Local governments in Shikoku now face the challenge of drawing up a formal plan to preserve the route and the 88 temples as cultural assets.

“Since those days, more and more media outlets have been promoting [the Shikoku pilgrimage] by focusing on its ties with Kūkai,” Mori acknowledged. “In addition, an increasing number of young people try the holy trek on foot to seek a challenge or embark on a journey of self-discovery.” (The Japan News) 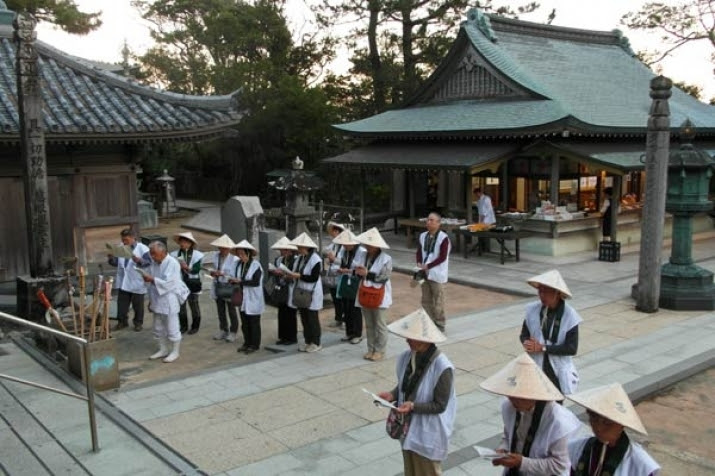 Pilgrims gather at Kongofuku-ji, the 38th temple on the pilgrimage route. From sacredsites.com

Among the pilgrims at Ishite-ji, the 51st temple along the route in the city of Matsuyama, 34-year-old Shinsuke Tosa from Okayama Prefecture is on the 27th day of his journey to pray for his sick mother. “My legs ache and I feel lonely, but I’ve been encouraged by meeting other people,” said Tosa. “[This pilgrimage] has given me a chance to self-reflect.” (The Japan News)

Many pilgrims begin and complete the journey by visiting Mount Kōya in Wakayama Prefecture, which was settled by Kūkai and remains the headquarters of Shingon Buddhism. The 21 kilometres (13 mi) walking trail up to Koya-san still exists, but most pilgrims use the train.