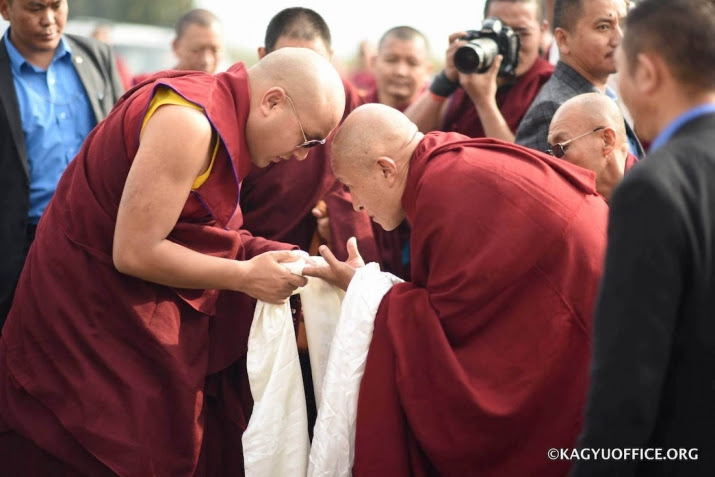 Dzongsar Khyentse Rinpoche, right, greets His Holiness the Karmapa. From kagyuoffice.org
Dzongsar Jamyang Khyentse Rinpoche was born in far Eastern, Bhutan in 1961.[1] At the age of seven he was recognized, by H.H. Sakya Trizin Rinpoche, as the third incarnation (Wylie sprul sku) of the founder of Khyentse lineage of Tibetan Buddhism.

Born in Bhutan in 1961 and now based in Himachal Pradesh, Dzongsar Khyentse Rinpoche is the son of Thinley Norbu Rinpoche and was a student of Dilgo Khyentse Rinpoche. He is recognized as the third incarnation of Jamyang Khyentse Wangpo, the founder of the Khyentse lineage. His projects include the Khyentse Foundation, which provides the financial support to fulfill his aspirations; 84000, which oversees the translation of the Word of the Buddha into modern languages; Lotus Outreach, which directs a wide range of projects to help refugees; and most recently The Lhomon Society, which promotes sustainable development in Bhutan through education.

After Dzongsar Khyentse Rinpoche made the traditional mandala offerings to mark the beginning of the ceremony, His Holiness the Karmapa addressed the assembled monastics on the special ties between the Karmapa and the Khyentse lineages and the importance of monastic education. 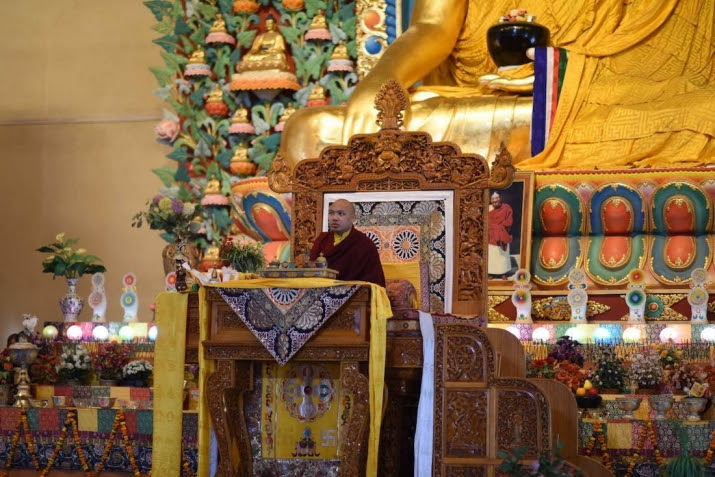 The Karmapa addresses the assembled monastics at the Dzongsar Khyentse Chökyi Lodrö Institute. From kagyuoffice.org

“When I was still in Tibet, of all the collected works I read, the one I looked at the most was that of the first Khyentse, Jamyang Khyentse Wangpo (Pema Ösel Dongak Lingpa, [1820–92]). I read it cover to cover and returned to it many times,” His Holiness recalled, noting that Khyentse Wangpo was truly Rimé (nonsectarian). “These days saying ‘Rimé’ sounds good, but often it is just ornamental, merely for show. To be a true master of these teachings is not at all easy. Many people are said to be experts, but if you look through history for a master of the teachings, you will find that Jamyang Khyentse Wangpo was an authentic one.” (Karmapa)

Speaking warmly of the relationship between Jamgon Kongtrul Lodro Thaye and Jamyang Khyentse Wangpo (1813–99), who together founded the Rimé movement, the Karmapa continued: “In the predictions of the 5th Karmapa Deshin Shekpa [1384–1415], the coming of the Khyentse and Kongtrul incarnations was foretold, and Deshin Shekpa also prophesized that whoever made a connection with them would find it deeply meaningful.” (Karmapa)

His Holiness praised Dzongsar Khyentse Rinpoche’s approach to teaching, which he described as “unambiguous, straightforward, penetrating, practical, and touching the heart,” remarking: “I have true devotion and pure vision for this lineage. I am very happy that I could meet Khyapje Dzongsar Khyentse Rinpoche here at his seat with all the khenpos and students, and that I could be present with everyone in a single mandala.” (Karmapa)

On the subject of monastic academic achievements, the Karmapa noted that it was important to maintain Tibetan traditions within the context of the 21st century: “Tibetans should not just follow their own tradition, but also look into the way things are done in this present age. In particular, we should pay attention to how education is given and include history in our curriculum,” he stated. “For example, we might study [Chandrakirti’s] Entering the Middle Way for a year, but if asked who translated this root text into Tibetan, we cannot answer because we have not looked into the historical background. This needs to change.

“If we know about the generations stretching into the distant past, when we are looking at a text, a different perspective and feeling can happen,” His Holiness said. “On the other hand, if we are not aware of the history and look straight off at the text, we will not know about the scholars who wrote it, or when and where they lived. We will just know their name, but not the relationships they had with other masters and what their life’s situation was. Without this knowledge, our understanding of a text is not complete,” he said. (Karmapa)

In his concluding remarks, the Karmapa observed that in continuing the Rimé tradition of the Khyentse lineage, the Dzongsar Khyentse Chökyi Lodrö Institute welcomed students from all traditions. His Holiness prayed for the minds of all the students to be in harmony, their discipline pure, and that they dedicate their time to the study and practice of the Dharma. 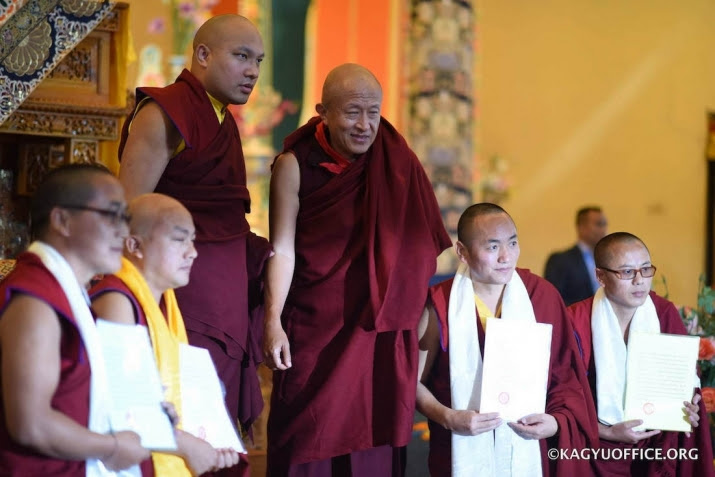 The Karmapa and Dzongsar Khyentse Rinpoche with the new khenpo degree holders. From kagyuoffice.org

The institution of the Karmapa is the oldest tulku lineage in Tibetan Buddhism, dating back to the first Gyalwa Karmapa, Düsum Khyenpa (1110–93), and predating the Dalai Lama lineage by more than two decades. The movements of His Holiness, who is based in the town of Sidhbari in Dharamsala after fleeing Tibet at the age of 14, remain closely watched by the Indian government.

* A title given to holders of the diploma, equivalent to a doctoral degree in divinity.
In 1989, Dzongsar Khyentse Rinpoche founded Siddhartha’s Intent, an international Buddhist association of non-profit centres, most of which are nationally registered societies and charities, with the principal intention of preserving the Buddhist teachings, as well as increasing an awareness and understanding of the many aspects of the Buddhist teaching beyond the limits of cultures and traditions.
Share this...