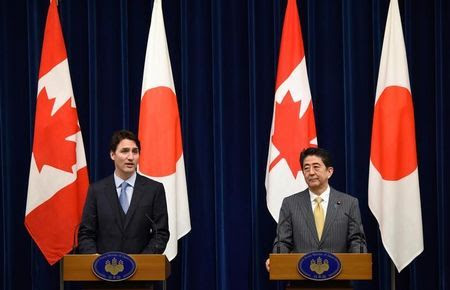 China and the United States have traded accusations of militarising the South China Sea as Beijing undertakes large-scale land reclamation and construction on disputed features while Washington has increased its patrols and exercises.

Abe’s comment, made at a joint news conference with Canadian Prime Minister Justin Trudeau, came ahead of a Group of Seven summit later this week, where maritime security, along with the global economy and terrorism, will be among main issues.

“As for the South China Sea, we share serious concerns over unilateral actions that raise tensions, such as large-scale reclamation, the building of facilities and militarisation,” Abe told reporters.

“It is a significant achievement that we have agreed to cooperate to secure rule-based, free, safe seas,” he said, referring to his talks with Trudeau.

China claims almost the entire South China Sea. Brunei, Malaysia, the Philippines, Taiwan and Vietnam also have claims to parts of the waters, through which about $5 trillion in trade is shipped every year.

Tokyo has no claims on the waterway but worries about China’s growing military reach into sea lanes through which much of Japan’s ship-borne trade passes.

Trudeau steered clear of the maritime dispute in his comments and instead chose to focus on economic ties with Japan.

“As part of our delegation, Canada’s trade minister is here. She will be meeting with Japanese companies and is expected to make a number of announcements as part of her visit,” he said.

He did not elaborate on the plans of International Trade Minister Chrystia Freeland in Japan.