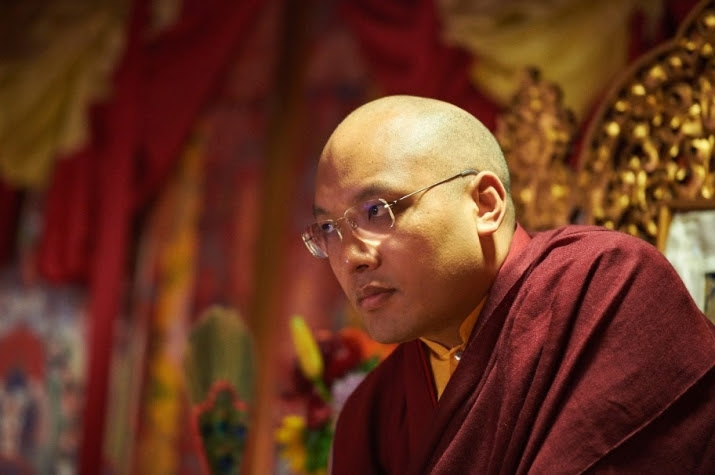 Karmapa” in Tibetan means one who upholds the activities of the Buddhas. The Karmapa also founded the Karma Kagyu branch of the Kagyu School of Tibetan Buddhism.

His Holiness the 17th Gyalwang Karmapa arrived in Geneva on Wednesday last week, having agreed to give teachings as well as the Medicine Buddha empowerment on 21 and 22 May, followed by the Avalokiteshvara empowerment and further teachings in Bülach, near Zurich, on 28 and 29 May. Switzerland is home to the second largest overseas population of ethnic Tibetans outside of India.

The Karmapa’s third official visit to Europe also includes dates in Paris, where he will give a teaching on the Four Noble Truths, a guided meditation, and another Avalokiteshvara empowerment.

He will also participate in several conferences during his European stay.

Upon his arrival in Switzerland, the Karmapa was formally received by Ringu Tulku Rinpoche, president of the Karmapa Foundation Europe, Ngodup Dorjee, representative for His Holiness the Dalai Lama, and Sangye Dorje, president of the Rigdzin Swiss Association, which organized the visit and is part of the International Nyingmapa Rigdzin Community.

During a visit to Thegchok Ling, a Nyingma Dharma center in Lausanne, last Friday, the Karmapa was presented with long-life offerings by the center’s founder Rigdzin Namkha Gyatso Rinpoche and other members of the center. After giving the oral transmission of the Seven-Line Prayer to Guru Rinpoche, the Karmapa observed: “The Nyingma and Kamtsang Kagyu lineages have an old and deep connection. When the 16th Karmapa came to India, he knew good relationships with Nyingma masters and khenpos, who were his profound Dharma friends.” (Karmapa: The Official Website of the 17th Gyalwang Karmapa)

His Holiness expressed his intention to ensure that the two traditions continue to work together to spread the Dharma for the benefit of sentient beings, complimenting the Nyingma tradition for its emphasis on practice and for the numerous realized masters it has fostered and continues to yield. “This is a special quality of the Nyingma lineage, distinguishing it from others,” the Karmapa said. “We should take these masters as our role models to sustain the practice and develop the qualities of the tradition so that all living beings may be benefited. This is the goal. My wish is that you practice this lineage with a strong motivation.

“The main reason I came to Switzerland is because there are so many Tibetans to meet here,” His Holiness continued. “I am happy to have met you and whatever the situation might be, I will help you as much as I can.” (Karmapa: The Official Website of the 17th Gyalwang Karmapa)

The Gyalwang Karmapa is the head of the Karma Kagyu, the largest lineage of the Kagyu, one of the four major schools of Tibetan Buddhism, the others being Gelug, Nyingma, and Sakya.

the 17th Karmapa also feels a strong personal connection to Europe. He often says that he feels that in one of his former lives, he was born as a farmer in Europe.