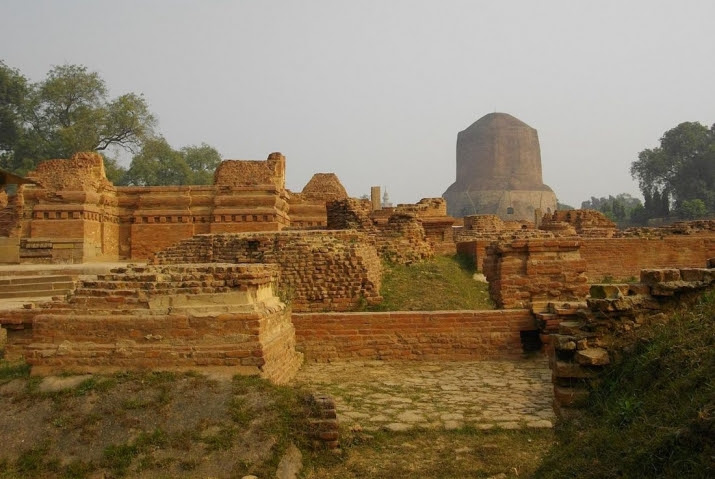 Sarnath is a city located 13 kilometres north-east of Varanasi near the confluence of the Ganges and the Gomati rivers in Uttar Pradesh, India. The deer park in Sarnath is where Gautama Buddha first taught the Dharma, and where the Buddhist Sangha came into existence through the enlightenment of Kondanna. Singhpur, a village approximately one km away from the site, was the birthplace of Shreyansanath, the Eleventh Tirthankara of Jainism, and a temple dedicated to him, is an important pilgrimage site.

Archaeologists in China and India are in talks to establish a collaborative project that will investigate key archaeological sites in the northeastern Indian city of Sarnath, a major pilgrimage destination for Buddhists around the world.

The historical Buddha, Shakyamuni, is believed to have traveled to Sarnath after attaining enlightenment in Bodh Gaya and to have given his first discourse on the Dharma at the deer park there. Sarnath is also believed to be where the Buddha acquired his first disciples, marking the founding of the first Buddhist sangha. Indian archaeologists have been working on excavations in the area since the late 19th century, unearthing numerous Buddhist relics and artifacts; however, many of the discoveries have yet to be fully dated and catalogued.

Leveraging the expertise of archaeologists from both countries, Wang said the project would bring to bear the latest archaeological technology, including three-dimensional remote sensing and three-dimensional imaging systems, as well as advanced indoor testing and analysis techniques. “We are very excited because our archaeologists will be finally able to look for, and may later touch and protect Indian relics that they have only seen in books,” he said. (Xinhua)

During the first millennium, many Chinese scholars and monks traveled to India, including the monk Xuanzang (c. 602–64), renowned for making a meticulously documented 17-year overland journey to India, where he studied widely, and the monk Yijing (635–713), who studied at the ancient Buddhist monastery and university of Nalanda in modern-day Bihar, northern India, for 11 years and also translated a large quantity of Buddhist texts from Sanskrit into Chinese. “The detailed accounts of their journeys are an important resource for historians, archaeologists, Buddhologists, and those interested in studying cross-cultural interactions in the pre-modern world,” said Wang. “On the basis of these records, archaeologists have explored several Buddhist sites in India.” (Xinhua)

Wang also expressed interest in investigating potential connections between Buddha statues discovered at Sarnath that have been dated to the Gupta empire (320­–550) and similar artifacts made in China during the Northern Qi dynasty (550–77). “The relationship between these relics may tell us something new about the spread of Buddhism in China,” he said.

A second project is also being planned, which will focus on artifacts excavated at Rakhigarhi, some 90 miles northwest of New Delhi, the site of what is believed to be the largest known pre-Indus Valley Civilization settlement. Archaeological investigations of the site, which has been dated as early as 4600 BCE, to date cover an area of some 865 acres. The discoveries of past excavations at Rakhigarhi include evidence of paved roads, drainage systems, rainwater collection and storage systems, terracotta bricks, skilled working of bronze and precious metals, and jewelry, including bangles made from terracotta, conch shells, gold, and semi-precious stones.In Sarnath, the base of the Ashoka pillar, which was broken during Turk Islamic invasions. It was originally surmounted by the Lion Capital of Ashoka, the “National Emblem of India”, now on display at the Sarnath Museum.