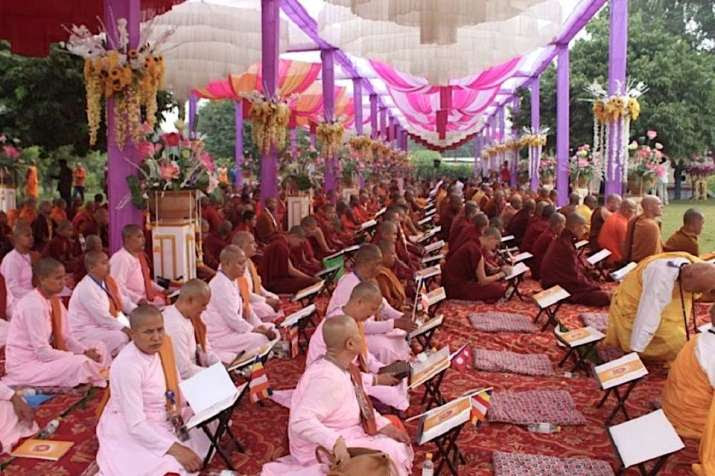 The second International Tipitaka Chanting Ceremony in Lumbini. From myrepublica.nagariknetwork.com

Tripiṭaka is a Sanskrit word meaning Three Baskets. It is the traditional term used by Buddhist traditions to describe their various canons of scriptures. The expression Three Baskets originally referred to three receptacles containing the scrolls on which the Buddhist scriptures were originally preserved. Hence, the Tripiṭaka traditionally contains three “baskets” of teachings: a Sūtra Piṭaka, a Vinaya Piṭaka and an Abhidharma Piṭaka.

tri-pit′a-ka, n. the whole body of the northern Buddhist canonical writings, comprising the three divisions of Sutras, or discourses of the Buddha for the laity; Vinaya, or discipline for the order; and Abhidharma, or metaphysics.[Sans. tri, three, pitaka, basket..

Nepal hosted its second International Tipitaka Chanting Ceremony (ITCC) in the garden of the Maya Devi Temple complex in Lumbini, the birthplace of the historical Buddha, from 14–16 November. This year’s ceremony was attended by thousands of pilgrims including monks and nuns from nearly 25 countries, including China, India, Japan, Myanmar, Nepal, Thailand, and Vietnam.

The program was jointly organized by the Lumbini Development Trust, the All Nepal Bhikkhu Association, and the Thai Buddha Vihar at Lumbini. Nepal’s first ITCC was also held in Lumbini last year, with the participation of about 700 monks and nuns from 18 countries.

“Lord Buddha, who had performed ‘Deshna’ [teaching] . . . the Tipitaka was recorded, three months after he preached. We call it [the] First Buddhist Council,” said Bhikkhu Maitri Mahasthavir, president of the Akhil Bhikkhu Mahasanga of Nepal (All Nepal Bhikkhu Association) and coordinator of the ITCC. “A total of 500 infinitum monks read out chapters on religion and politeness. One hundred years later, during King Kalasoka, again a group of 700 monks read it out, again after 300 years during the time of Samrat Ashok again the religion was transformed.” (Business Standard)

The organizers of the chanting said they hoped that such events would help to make people aware of the  significance of the Tipitaka and introduce the Buddhadhamma to more people around the world. Thousands of pilgrims from 25 countries attended the chanting. From aninews.in

Inaugurating the ceremony, Shankar Pokhrel, chief minister of Province No.5, said that the ITCC would help to attract more tourists to Lumbini. “It will also help to spread the teachings of Buddha all over the world.” (My Republica)

“Chanting the teachings of Buddha has further helped to highlight the spiritual importance of Lumbini,” said Awadesh Kumar Tripathi, vice president of the Lumbini Development Trust. (My Republica)

Located in Rupandehi District of Nepal’s Province No.5, Lumbini is one of the most important spiritual sites in the world for Buddhist pilgrims. Lumbini is home to a number of old temples, the most sacred among them being Maya Devi, marking the site at which archaeologists believe they have identified as where the Buddha was born. Inscriptions on the nearby pillar of Ashoka also refer to the spot as his birthplace. In 1997, Lumbini was officially listed as a UNESCO World Heritage Site.

The ITCC is an annual event held in different places connected with Buddhism. The Light of Buddhadharma Foundation International (LBDFI) first organized the ITCC in 2006 on the occasion of the 2,550th Buddha Jyanti in Bodh Gaya, India. With the sponsorship of LBDFI, the ITCC is organized in December each year, beneath the Bodhi tree at Mahabodhi Mahavihara Temple. The LBDFI also hosts a Tipitaka chanting ceremony at Deekshabhoomi Temple in the city of Nagpur, New Delhi, in Sankissa, an ancient city in the state of Uttar Pradesh, and in Sri Lanka, and the United States.