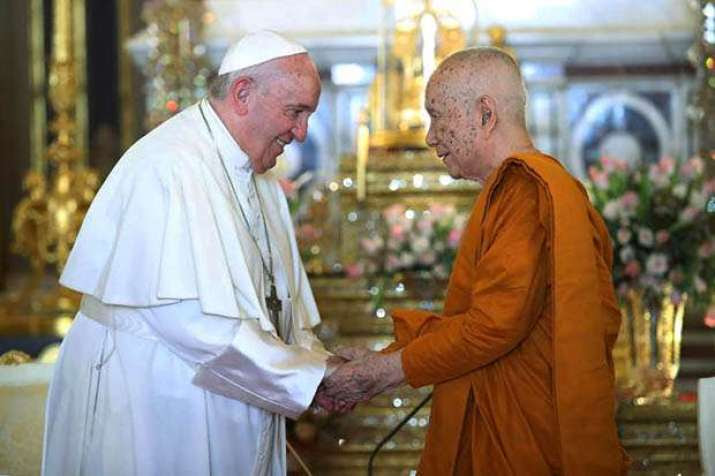 “interreligious” as “relations with other religions, such as Hinduism and Buddhism”

Pope Francis is on a six-day trip to Asia, visiting Thailand from 20–23 November, before moving on to Japan from 23–25 November.*

The meeting of the two spiritual leaders was held amid the gilded grandeur of Wat Ratchabophit Sathit Maha Simaram, a 19th century Buddhist monastery and temple in central Bangkok, of which the Supreme Patriarch is abbot. After the two were seated before a large golden statue of the Buddha, the Supreme Patriarch noted that Thailand and the Vatican have enjoyed long and warm ties, and as such he welcomed the Pope as an old friend rather than a new acquaintance, saying that he would offer prayers for the pontiff’s continued good health and work.

The supreme patriarch—the official title is Somdet Phra Sangharaja Sakalamahasanghaparinayaka—is the head of the Thai monastic sangha and president ex officio of the Supreme Sangha Council, the administrative body that governs the Thai sangha. The supreme patriarch oversees both of Thailand’s Theravada orders, the Maha Nikaya and the Thammayut Nikaya, as well as the country’s small minority of Mahayana Buddhists. Ven. Somdet Phra Ariyavongsagatanana was appointed as the current supreme patriarch in February 2017.**

“Catholics have enjoyed freedom in religious practice, despite their being in a minority, and for many years have lived in harmony with their Buddhist brothers and sisters,” Pope Francis said in a speech at the meeting. “On this path of mutual trust and fraternity, I wish to reiterate my personal commitment, and that of the whole church, to furthering an open and respectful dialogue in the service of the peace and well-being of this people.” (Bangkok Post, Catholic Herald)

The Pope earlier described his meeting with the Supreme Patriarch as “a sign of the importance and urgency of promoting friendship and inter-religious dialogue.” (Bangkok Post)

The Supreme Patriarch shared a brief informal conversation with the Pope during the meeting, in which they noted the value of fraternity between the two religions for promoting peace.

“If we are brothers, we can help world peace,” the poor, and the suffering, Pope Francis said, “Because to help the poor is always a path of blessing.” (Catholic Herald)

While Buddhist-majority Thailand does not have a state religion, its constitution, which guarantees religious freedom for all Thai citizens, includes special provisions to protect Buddhism. Article 67 of the charter reads: “The state shall protect and patronize Buddhism and other religions. In protecting Buddhism, which is the religion to which the majority of the Thai people have adhered since time immemorial, the state shall encourage education to promote the teachings of Theravada Buddhism for the development of the mind and wisdom, and shall implement measures to prevent any forms of harm or threat against Buddhism, together with encouraging Buddhists to take part in enacting these measures.” The Thai monarch is also required by law to be a Theravada Buddhist. The Supreme Patriarch and Pope Francis speak at Wat Ratchabophit. From nationthailand.com

The Pope’s visit also coincided with the 350th anniversary of the founding of the “Mission de Siam,” the first visit to Thailand by Catholic missionaries from Europe in the 17th century.

In a meeting with Prime Minister Prayuth Chan-ocha on Thursday morning, Pope Francis urged the Thai government to ensure proactive steps are taken against the scourge of human trafficking to supply forced labor and the sex trade, and to protect women and children “who are violated and exposed to every form of exploitation, enslavement, violence and abuse.” (Bangkok Post)

The United Nations considers Thailand a key focal point for human trafficking in Southeast Asia, and a source of domestic and international forced labour and sex slaves.

“May every nation devise effective means for protecting the dignity and rights of migrants and refugees, who face danger, uncertainty and exploitation in their quest for freedom and a decent life for their families,” the Pope said. “It is not just about migrants; it is also about the face we want to give to our societies.” (Bangkok Post) Later on Thursday, the pontiff had an audience with King Maha Vajiralongkorn and Queen Suthida, before leading a public mass for some 70,000 people in Bangkok’s Supachalasai National Stadium.

The pope is scheduled to fly to Japan on Saturday, where he will visit Hiroshima and Nagasaki, two cities devastated when the US dropped atomic bombs at the end of World War II in 1945. The pope has been a vocal opponent of nuclear arms.

Thailand is a predominantly Theravada Buddhist country, with 94.5 per cent of the nation’s population of 69 million identifying as Buddhists, according to government census data for 2015. Vatican estimates put the number of catholics in Thailand at 325,000, or 0.59 per cent of the population—80 per cent of whom are Thai, with immigrants accounting for a growing proportion.