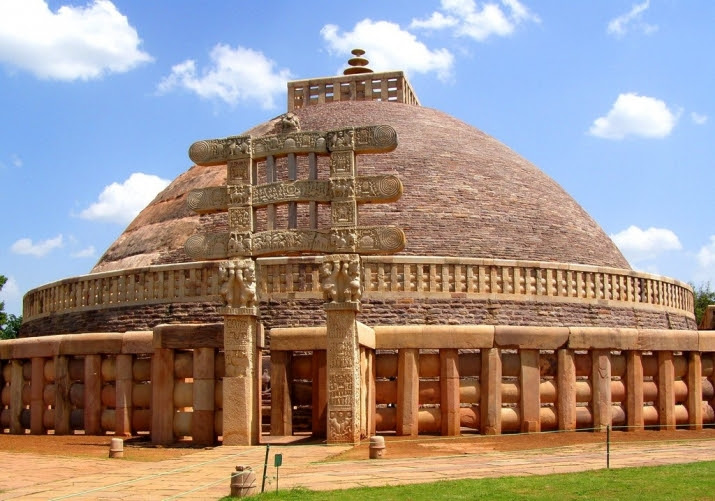 The Great Stupa at Sanchi. From pinterest.com
The Buddhist vihara at Sanchi, famous for its Great Stupa, is located at Sanchi Town in Raisen District of the state of Madhya Pradesh, India.

The International Buddhist Festival was held on 27 November at Chetiyagiri Vihara in the town of Sanchi. Sanchi is 46km to the northeast of Bhopal in the Indian state of Madhya Pradesh. The event attracted hundreds of local and foreign tourists, hailing from as far afield as Japan, Myanmar, Singapore, Sri Lanka, and Taiwan, who gathered to pay homage to holy relics of the Buddha’s two foremost disciples, Shariputra and Maudgalyayana. This tradition has been observed annually for the past 65 years, usually on the last Sunday of November.

According to archaeologist Dr. Narayan Vyas, the British archaeologist Alexander Cunningham found two boxes of gray sandtone inside the Great Stupa at Sanchi in 1851. The Great Stupa is the oldest stone structure in India, dated to the 3rd century BCE. Originally a humbler hemispheric building erected over the relics of the Buddha, it was commissioned by Ashoka (304–232 BCE), one of India’s most acclaimed emperors and a pious Buddhist ruler. Sanchi also is home to two other stupas that house the relics of several of the Buddha’s disciples. 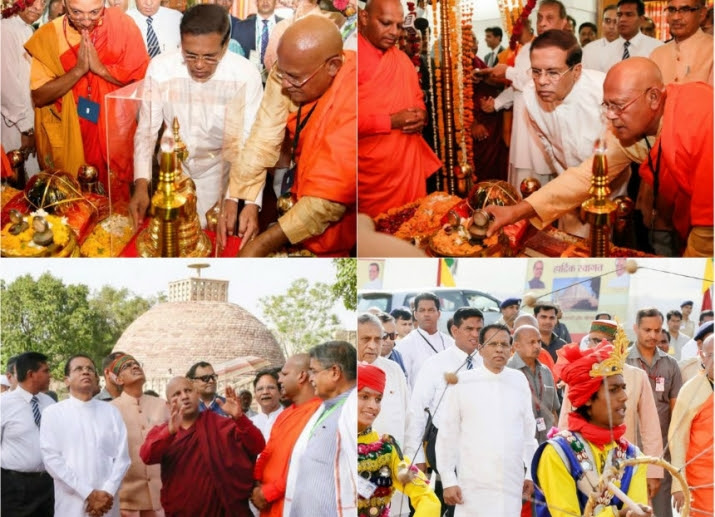 “The relics from both stupas [the Great Stupa and another] were removed to England and placed in the Victoria and Albert Museum. Maha Bodhi Society and Jawahar Lal Nehru [the first PM of India] played a key role in getting the relics back,” Vyas said to the Hindustan Times, adding: “The [Maha Bodhi] society requested the British government to return the relics to India in 1937 and after years of lobbying and struggle the relics were handed over to India in 1947.”

According to research scholar Torkel Brekke from the University of Oslo, the Maha Bodhi Society sent a delegation to the governor of Bhopal in 1946 to get the permission to enshrine the relics at Sanchi. Besides granting permission, the governor promised to donate the equivalent of about US$366 for the enshrinement. On 30 November 1952, Nehru had the relics placed inside the third stupa at the complex of the historical Buddhist monuments in Sanchi. In the same year, the Maha Bodhi Society of Ceylon established Chetiyagiri Vihara in the stupa complex.

As the event is held at the temple sanctum, it is also known as the Chetiyagiri Vihara Festival. Since then, the Maha Bodhi Society of India has taken on the responsibility of organizing the festival.

Sanchi, especially Stupa 1, has a large number of Brahmi inscriptions. Although most of them are small and mention donations, they are of great historical significance