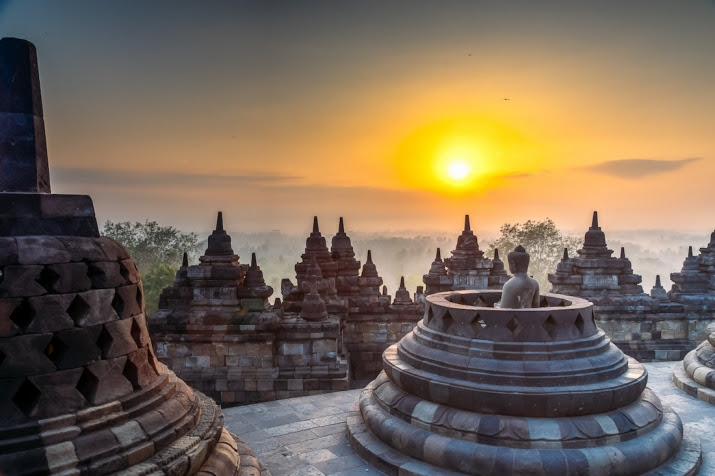 The Borobudur Temple Compounds is one of the greatest Buddhist monuments in the world, and was built in the 8th and 9th centuries AD during the reign of the Syailendra Dynasty. The monument is located in the Kedu Valley, in the southern part of Central Java, at the centre of the island of Java, Indonesia.

The main temple is a stupa built in three tiers around a hill which was a natural centre: a pyramidal base with five concentric square terraces, the trunk of a cone with three circular platforms and, at the top, a monumental stupa. The walls and balustrades are decorated with fine low reliefs, covering a total surface area of 2,520 m2. Around the circular platforms are 72 openwork stupas, each containing a statue of the Buddha.

As Indonesia seeks to further expand spiritual tourism to the Buddhist temple of Borobudur in central Java Province, the Tidar Heritage Foundation (THF) organized a special cultural program, which officials expressed hope would help the UNESCO World Heritage Site become as relevant a religious destination as Jerusalem or Rome, and make it instrumental in promoting peace and interfaith harmony around the world.

The event was held at the nearby city of Magelang, and attended by representatives from embassies including Australia, China, Croatia, Germany, Hungary, Lebanon, Mongolia, Oman, and the Philippines, who were treated to a series of cultural performances themed around the Javanese folktale of Brotonirmoy, a holy man from Mount Tidar who, legends hold, spread teachings of spiritualism, peace, and harmony that transcended race, culture, and religious differences.

“This event is highly expected to cultivate this city [as] Indonesia’s spiritual tourism destination, making it an alternative to Rome or Jerusalem,” said a THF official. “Indonesia has long been known as [a] society that promotes peace and harmony in the world.” (Xinhua)

Borobudur Temple has been designated as one of 10 tourist destinations that the Indonesian government plans to promote in an effort to boost the nation’s tourism sector, a core segment of the Indonesian economy.

Reputed to be the largest Buddhist temple in the world, Borobudur was built in the 8th and 9th centuries during the Syailendra dynasty, which ruled Java for some 500 years until the 10th century. The temple was constructed in three tiers: a pyramidal base with five concentric square terraces, a cone-shaped trunk with three circular platforms, and a stupa at the top. The walls and balustrades are decorated with fine low reliefs, while the central dome is surrounded by 72 openwork stupas, each containing a statue of the Buddha. The temple is decorated with 2,672 relief panels and 504 Buddha statues in total.

The temple compound includes two smaller temples directly to the east of Borobudur—Mendut Temple, which features a depiction of the Buddha accompanied by two bodhisattvas, and the smaller Pawon Temple. The three temples together represent three phases in the attainment of nirvana.

The exact origins of the temple are uncertain, but the rulers at the time are known to have been active promoters of Mahayana Buddhism. One theory states that the temple is a representation of Buddhist cosmology. Shaped like a mandala, the 15,000 square meter temple takes the visitor through the world of desire, represented at the lower levels of the temple, to the world of forms, and finally the world of formlessness. These stages are narrated by the architecture and imagery of the temple provides a narrative for these three stages. In the center of the temple, there is a 10-meter stupa encouraging Buddhists everywhere to strive for enlightenment.

The temple, an example of Javanese Buddhist architecture, combines Buddhist cosmology with the Indonesian indigenous practice of ancestor worship. Buddhism came to Indonesia via India, in the 2nd or 3rd century, making it the second-oldest religion in the country after Hinduism. Buddhism and Hinduism coexisted in Indonesia up until the 15th century, but with the introduction of the Islam by traders, the influence of Buddhism declined and is now mainly restricted to Bali and Eastern Java. In 1955, Buddhism experienced something of a revival in Indonesia, when the monk Ashin Jinarakkhita came to spread the Dharma. Since then Indonesian monks trained in Thailand are spreading Theravada Buddhism, although the Mahayana tradition also perseveres.

Buddhism is one of five official religions in Indonesia, observed by about 0.7 per cent of the country’s population, along with Islam (87.2 per cent), Christianity (9.9 per cent), and Hinduism (1.7 per cent), with Confucianism and others accounting for 0.2 per cent, according to 2010 census data.

Borobudur was first thought more likely to have served as a stupa, instead of a temple.A stupa is intended as a shrine for the Buddha. Sometimes stupas were built only as devotional symbols of Buddhism. A temple, on the other hand, is used as a house of worship. The meticulous complexity of the monument’s design suggests that Borobudur is in fact a temple.