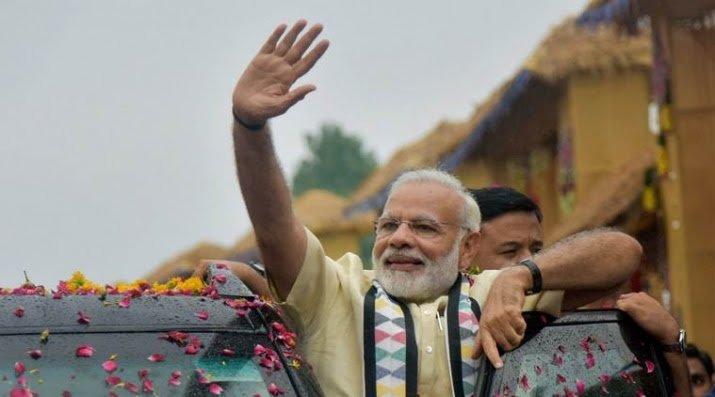 PM  Narendra Modi has revealed plans to erect a “grand” monument to the Buddha at the site of an ancient Buddhist monastery in the western state of Gujarat.

Speaking  at a gathering to launch infrastructure projects to deliver potable water, Modi told attendees that he aspired to build a huge memorial to Shakyamuni Buddha beside a recent archaeological dig in Gujarat’s Aravalli District, where researchers have unearthed the ruins of a Buddhist monastery dated to the 3rd–4th century. The excavation, near the village of Dev Ni Mori, is also reported to have revealed an inscribed casket containing relics of the Buddha.

A microlith site known as Dhek-Vadlo locally was found near Shamlaji. A Buddhist stupa known as Devni Mori is located near it which dates to Mauryan period.

“There was a general notion earlier that Lord Buddha was popular in the eastern belt of the country only. But the excavation at Dev Ni Mori near Shamlaji temple [in Aravalli] some time back has established that Lord Buddha’s influence had reached the western belt too,” said Modi. “This came to be known when the relics of Buddha were found at an excavation in Dev Ni Mori near Shamlaji.” (Firstpost, The Times of India)

“It is my dream to build a grand monument of Lord Buddha at Dev ni Mori so that people from across the world can come here and visit this place. I’m confident of fulfilling my dream with your blessings,” Modi said. (The Statesman)

Modi’s announcement came during the launch of several drinking water supply schemes serving some 600 villages and three towns in the region and the laying of foundation stones for a number of other infrastructure projects.

“The great [Chinese Buddhist monk, scholar, and traveler Xuanzang (c. 602–64)], in his travelogue wrote that more than 10,000 Buddhist monks were living at a monastery in my birthplace, Vadnagar. Hsuan Tsang had lived at my native place for quite a long time. During my visit to China last year, the Chinese premier told me what Hsuan Tsang had written during his stay at Vadnagar,” Modi observed. “Hsuan Tsang spent the greater part of his life at my village and Chinese president Xi Jinping’s village. I have a dream to make a giant monument to Lord Buddha at Dev Ni Mori, where people from across the world will come to visit. This is my dream and I want the blessings of the people of Gujarat to fulfil this dream.” (The Times of India)

Devni Mori, 2 km from Shamlaji, has remains of a Buddhist monastery dated to 3rd-4th century. The inscribed casket with body relics of Buddha was found from the Stupa excavated here.

The tomb of Navgaja Pir, a maulvi, is revered by many tribals.

Shyamalvan is a theme-based garden developed by Forest Department of Government of Gujarat. It was inaugurated by then Chief Minister of Gujarat, Narendra Modi, on 18 July 2009.

Buddhism has played a central role in efforts by India’s ruling Bharatiya Janata Party to shore up its voter base among the country’s Buddhist Dalit population and as a key element of diplomatic power plays between India and China, with Nepal sandwiched between the two geographic and economic giants. Modi in particular has gone to considerable lengths to promote India’s Buddhist history as a shared bond with China that dates back more than 2,000 years, despite the fact that Buddhists make up only a tiny fraction of India’s present population.

Shamlaji is around 20 km from Bhiloda and 29 km from Modasa. Located off National Highway 8, Shamlaji is frequented by state transport buses from Himmatnagar and Ahmedabad.