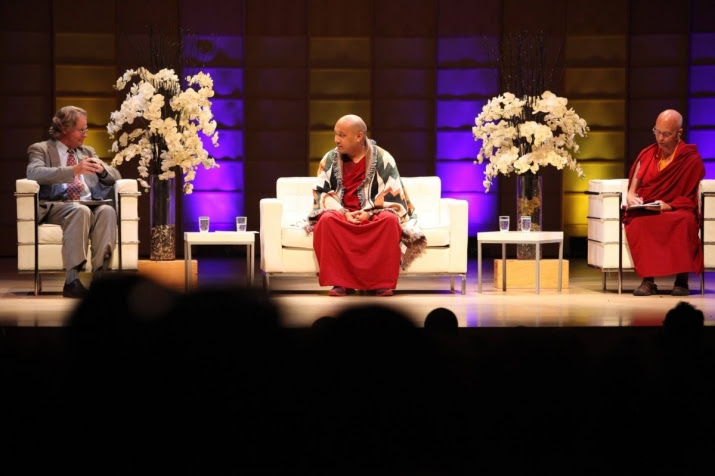 By  Shyamal Sinha
His Holiness the 17th Gyalwang Karmapa Ogyen Trinley Dorje is the head of the 900 year old Karma Kagyu Lineage and guide to millions of Buddhists around the world.

The 17th Gyalwang Karmapa, Ogyen Trinley Dorje, recently completed his historic first visit to Canada, with stops in Toronto, Calgary, and Vancouver. His talks encompassed a range of topics, from those appealing to a wider audience: “Mindfulness and Environmental Responsibility,” to subjects aimed at more advanced practitioners, including Manjushri and Chenrezig empowerments.

At 31 years of age and heading a spiritual lineage stretching back to the 12th century, the Karmapa is seen by many as the natural successor to the 81-year-old Dalai Lama as the spiritual leader of the Tibetan people. In Ontario in late May, he met with local politicians and walked around Queen’s Park in brown hiking shoes and his well-known simple maroon monk’s robes. He is easily described as, “a picture of youthful wisdom with his direct gaze, towering above other monks at six feet tall,” and it is quite possible that he will become the next public face of Tibetan Buddhism. (Toronto Star)

“It is almost impossible to take on the role of the Dalai Lama,” said the Karmapa. “I will try to do as much as I can do, but this issue about future leadership, this is not something that I alone can decide. I think this is up to the people of Tibet. Maybe things need more time to resolve this problem,” he concluded, leaving the issue in the air. (Toronto Star)

The Karmapa has long been a passionate environmentalist, incorporating environmentalist thought into both his teachings and life’s work. When he spoke at Yale in 2015, his chosen topic was “Buddhism and the Environment,” and he has reached out to many media organizations about the grave threats facing the Himalayan environment. “The environmental emergency that we face is not just a scientific issue, nor is it just a political issue,” he said. “It is also a moral issue.” (Kagyu Office)

The Karmapa wrapped up his speaking tour of Canada with a conversation with Canadian anthropologist Wade Davis. This talk focused on the Karmapa’s new book Interconnected: Embracing Life in Our Global Society (Wisdom Publications 2017), which covers a range of topics, from technology to culture, and from the environment to Buddhist philosophy.

Connecting his experiences with the ideas in the book, the Karmapa discussed how his early life as a nomad influenced his concern for nature. The cultural tendency of those communities was simply to live in harmony with the environment. It wasn’t until he moved to India in his teens, the Karmapa noted, that conversations were needed about conserving nature. His Holiness connects this to a fundamental Buddhist concept in his book, writing, “Greed is a hunger that only intensifies the more we feed it.”

“Even if we had five or six Earths,” the Karmapa said in his talk with Wade Davis, “we still would have difficulty fulfilling and satisfying all of our desires. And so, the most important point is that we have to control our desires.”

Following this public talk, the Karmapa wrapped up his time in Canada on 23 and 24 June with teachings and empowerments on “Akshobya Buddha: Dealing with Disturbing Emotions.” This concluded his foreign travel for the year, with several winter programs scheduled for Bodh Gaya, India, from November.

He is following in the footsteps of his predecessor the 16th Karmapa, who travelled extensively throughout the country and was instrumental in introducing Canadians to Buddhism in the 1970s.