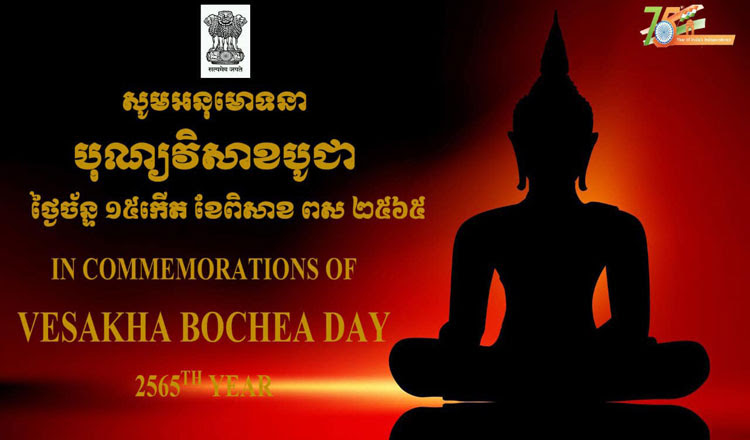 The Indian Embassy in Cambodia celebrates Vesak Day via webinar on Sunday. Facebook

The Embassy of India in Phnom Penh, in collaboration with Preah Sihanouk Raja Buddhist University (SBU), hosted a webinar discussion on Sunday, about Buddhism in Cambodia and Southeast Asia to celebrate Vesak Day and the 130th anniversary of the birth of Dr B R Ambedkar, considered the chief architect of the Constitution of India.

During the webinar, Ambassador of India to Cambodia Dr Devyani Khobragade stressed the importance of Vesak Day for the Buddhist community all over the world.

“The United Nations at the 54th session of UN General Assembly in 1999 had recognised Vesak as an International Day of Observance.  The teachings of Buddha have brought people together across social, generational, cultural and national divides especially in these challenging times of the COVID-19 pandemic,” she said.

She highlighted the ancient connections between India and Cambodia and India’s efforts to take its relationship with Southeast Asian countries, including Cambodia, to new heights through Buddhist linkages.

“As heirs to these ancient civilisations and religion, our countries have a lot to offer to the rest of the world in the form of culture and learning,” she added.

Dr Khobragade also outlined some of the initiatives that the Indian government has been undertaking, such as working on the Buddhist circuit, organising international Buddhist conferences, offering scholarships to Cambodian students and monks in Nalanda University on Buddhist studies as well as organising online ITEC courses on Buddhism and Vipassana and more.

She highlighted India’s resolve to continue fostering strong Buddhist linkages between India and Cambodia through various bilateral, multilateral and public and private initiatives.

Samdech Preah Maha Ariyavamsa Venerable Khy Sovanratana, Acting Rector of SBU, also spoke on the Buddhist linkages between India and Cambodia and the Indic roots of Buddhism and its influence on Cambodia and other Southeast Asian nations.

During the webinar session, all the speakers agreed on how the Buddhist tradition and the philosophical ideas that underpin it have been instrumental in maintaining Cambodia’s resilience to the adversities it has faced in the recent past.

It highlighted that Buddhism embodies universal values such as human dignity, individual freedom and equality, tolerance and plurality as well as truth and non-violence.

Accordingly, these were the values that inspired Dr Ambedkar to adopt Buddhism later in his life, along with millions of his followers.

Dr Ambedkar is therefore respected and well known in many Buddhist countries as a social reformer who led to a revival of Buddhism in India.

He is also known as Babasaheb Ambedkar, an Indian jurist, economist, politician and social reformer who inspired the Dalit Buddhist movement and campaigned against social discrimination.