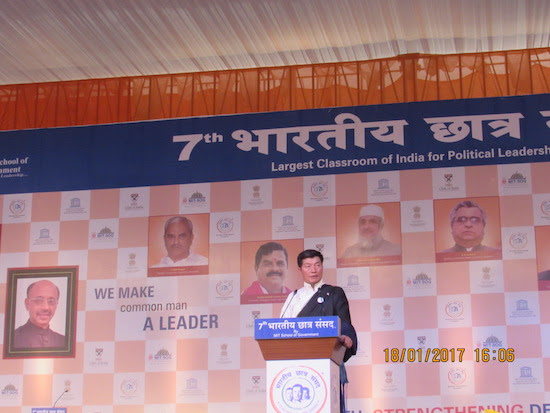 PUNE: Addressing over 10,000 students at the annual Bharatiya Chatra Sansad on 18 January, Sikyong called on India to reclaim its no. 1 position in the world.

“Around the 1st and 2nd centuries till the 13th century, India used to be the no.1 in everything including trade, arts and civilization. However, after the colonisation, it has declined,” Sikyong said.

“Now with the reemergence of India’s global significance, its time for India to reclaim its rightful position as the no.1 global super power,” he added.

Sikyong was participating in the session titled ‘Repositioning India : A Global Perspective. His address to the gathering focused on reviving the soul of India through the Nalanda tradition.

“At this moment in the world, there is a challenge to globalisation, liberalism, and democracy. In fact there is a rise in extremism, nationalism and illiberalism as evidenced by the victories of right wing nationalistic ideologies and candidates around the world,” Sikyong noted.

“In such a scenario for India to reclaim its erstwhile global super power status, it should revisit its ancient civilisation with its rich history of Buddhist culture and knowledge,” he said.

“Buddhism was India’s greatest export as far as the world is concerned. If you look at the world particularly those in India’s neighborhood, Indian Buddhist culture had a significant impact on each of them,” he added.

“However, the sad irony now is that even though India has a rich Buddhist past, China currently has the upper hand in terms of using Buddhism as a global soft power,” he lamented.

“India should invest more in Buddhism and reenergise its Buddhist culture and traditions. I believe it will not only restore its rich civilization but also aid in countering the surge of extreme nationalism across the globe,” he suggested.

“We should look back into history at India’s rich Buddhist civilisation. Buddhist based liberalism, integration and inclusivity is the answer,” Sikyong asserted.

The Bharatya Chatra Sansad also known as the Indian student parliament is one of the largest student organisations in the world. The current conclave of the student organistaion is its 7th annual session.

Sikyong Dr Lobsang Sangay, who is a governing member of the organisation, also interacted with the students after the formal ceremony.