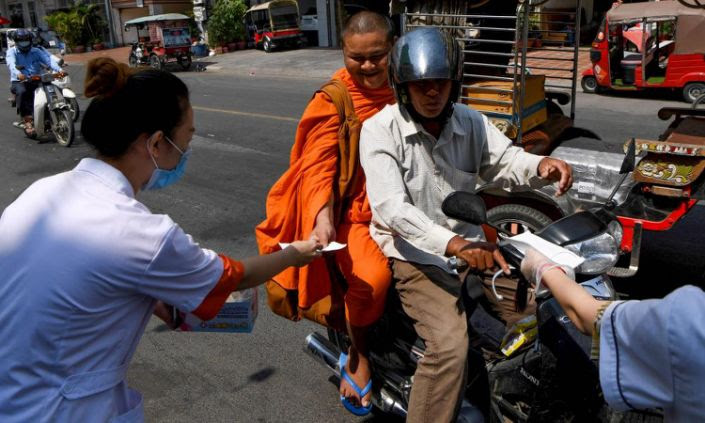 By  —  Shyamal Sinha
Coronavirus disease (COVID-19) is an infectious disease caused by a newly discovered coronavirus.
Most people who fall sick with COVID-19 will experience mild to moderate symptoms and recover without special treatment.

Thailand was described as especially vulnerable due to the large number of travellers it had received from Wuhan, and by the end of January it had the second highest number of cases outside of China. As footage circulated online, showing panic in Wuhan hospitals and residents collapsing in the streets, health experts wondered how countries with far weaker health systems would cope.

The virus has caused deaths and misery across south-east Asia, particularly in the Philippines, Indonesia and workers’ dorms in Singapore, where officials are struggling to control outbreaks. But elsewhere in the region, the worst fears have so far been mostly avoided..

Thailand has recorded 58 deaths, while Malaysia has confirmed 120. Vietnam, which has won praise for its response, has not recorded a single fatality. Public awareness has been key in countries that have had such relative success, said Dale Fisher, professor at the National University of Singapore and chair of the Global Outbreak Alert and Response Network at the World Health Organization.

Clear messaging, he adds, is essential. “When you have any country with a weak leadership then people get confused. They’re not sure what to do and who to believe, and then you legitimise ignorance,” said Fisher.

Experts say that by acting quickly, and by drawing on well-established systems in place following the Sars epidemic in 2002, health departments in many south-east Asian countries have avoided the explosion in community transmission seen elsewhere.

In Malaysia, meetings to prepare a response were held as early as December, said Dr Fifa Rahman, who reviewed the country’s handling of the pandemic for the Drugs for Neglected Diseases initiative. Reagents needed for diagnostic tests were ordered early, and plans were made to reorganise hospitals in the event of a large outbreak.

A Thai Buddhist monk registers for a Covid-19 swab test at Wat Pho temple in Bangkok in May. Photograph: Rungroj Yongrit/EPAAs in many other south-east Asian countries, all those diagnosed as Covid-19 positive were hospitalised, even if they were asymptomatic .

Asymptomatic cases are challenging to identify because individuals do not know they are infected unless they are tested, typically as part of a scientific study. Therefore, various studies and their findings vary in this aspect. The WHO has indeed said that asymptomatic spread of the new coronavirus is rare.

Countries in the region have not performed mass testing on the same scale as South Korea, but instead focused on high-risk individuals or targeted mass testing across buildings or neighbourhoods where positive cases were identified. Some question whether low testing rates mean cases have remained hidden. In Cambodia, 17,000 people have been tested so far, with 126 infections detected, most related to foreign travel. There are likely to be undetected infections, but hospitals are not overwhelmed, as in parts of Indonesia. Cambodia has reported no deaths.

Mistakes have been made. Cambodia’s authoritarian leader, Hun Sen, caused nervousness by downplaying the virus during the early stages of the outbreak. In Singapore, neglect of migrant workers, who live in overcrowded dormitories, caused the vast majority of its 40,197 cases. Malaysia’s biggest spike followed an event at a mosque near Kuala Lumpur, after a failure to prevent mass religious gatherings.

On the whole, Malaysia’s response has been led by health experts rather than politicians, said Rahman. When the health minister suggested on TV that drinking warm water was a cure, his comments were quickly rejected by Dr Noor Hisham, the director-general of health. “There was a clear conflict but that conflict was good,” said Rahman. “In the UK there has been a pretty close synergy between political leaders and technical experts. I don’t know if that results in better global health responses.”

Likewise, when the Malaysian deputy health minister, Noor Azmi Ghazali, was photographed breaking strict lockdown rules, he was fined. It sent a strong message to the public, she added.

Restrictions on movement in Malaysia were particularly strict. Only one person per family was allowed outside for groceries, and people were not allowed out for daily exercise.

It has been suggested that heat or humidity could slow transmission, but experts say there is no evidence for this. Other factors, such as the rural profile of countries such as Cambodia, could influence transmission, Li said. “High-risk events are not common here,” she added. The young demographic in some countries may also mean populations are less vulnerable.

Yet such factors, experts say, cannot be relied on to protect a country as business reopens. In Bangkok, which enjoyed a brief moment of clean air during its lockdown, the roads are once again heaving with traffic. Markets have come back to life – though with plastic screens at dining tables, near ubiquitous mask-wearing and temperature scanning. As countries look to ease travel bans, and rebuild economies, health teams are aware there is no room for complacency.

Thailand’s capital, Bangkok, which only last month had closed schools because the pollution got so bad, has experienced a similar transformation in the air since partial lockdown, mainly due to the fall in road traffic. “We can see quite a big gap between the air quality standard that we have [compared with this time last year],” says Tara Buakamsri, Thailand director for Greenpeace.