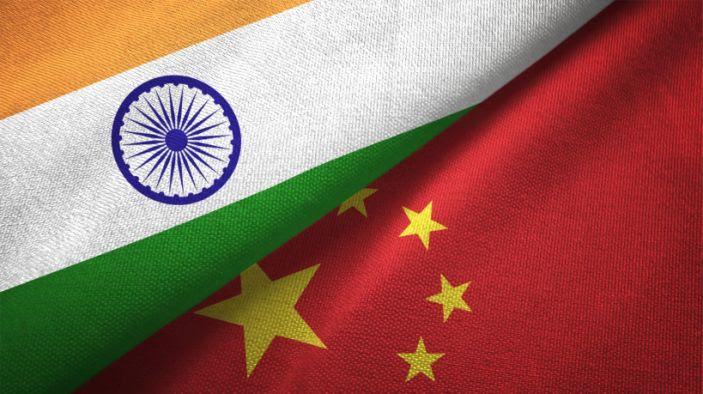 China and India flag together realtions textile cloth fabric textureIndia’s External Affairs Ministry on Tuesday said the violent confrontation between armies of India and China in eastern Ladakh was the result of an attempt by the Chinese side to unilaterally change the status quo in the region.

The ministry said both sides suffered casualties that could have been avoided had the agreement arrived earlier at the higher level been scrupulously followed by the Chinese side.

At a briefing at the Chinese Foreign Ministry, Spokesman Zhao Lijian said the ‘sovereignty of the Galwan Valley area has always belonged to China,’ echoing a statement of the Chinese military on Tuesday, opening up another dispute.

When asked since Galwan is regarded as settled border and why China is claiming sovereignty over the area now, Zhao said, ‘regarding the mater of the Galwan area we are having communication through military and diplomatic channels. Right and wrong of this is very clear. This happened at the Chinese side of the border and China is not to be blamed for it.’ He also refused to comment on reports of 43 casualties on the Chinese side during the face-off with the Indian Army in the Galwan Valley on Monday night.

‘The border troops are dealing with relevant matter,’ he said.

When pointed out that the India has released the number of casualties and why Beijing was not providing the number for Chinese side, he said, ‘I have stated that Chinese and Indian border troops are now jointly dealing with the relevant matter on the ground. I have nothing to add at the moment.’ ‘On the situation at the China-India border both sides are having close communication with each other to resolve this through diplomatic and military channels, Zhao said.

‘The over all border situation is stable and controllable,’ he told correspondents to a volley of questions.

Responding to a question whether whether further clashes could be averted, the spokesman said, ‘from the Chinese side we do not wish to see more clashes.’ ‘I belive you have noticed that China and India have both said that we are committed to resolve the differences through dialogue safeguarding peace and tranquillity in the border area.

‘As the world’s two biggest countries and emerging economies, the shared interest of China and India are far larger than the differences.

‘Both sides should earnestly follow important consensus reached by the leaders of the two countries and ensure that the bilateral relationship can move forward in the right direction and that serves our peoples interests and expectations. We hope India can work with China to this end,’ Zhao said.

Twenty Indian Army personnel, including a Colonel, were killed in the clash with Chinese troops in the Galwan Valley on Monday night, the biggest military confrontation in over five decades that has significantly escalated the already volatile border standoff between the two countries.

A large number of Indian and Chinese troops have been engaged in an eyeball-to-eyeball situation in Galwan Valley and certain other areas of eastern Ladakh for the last five weeks, including in Pangong Tso, Galwan Valley, Demchok and Daulat Beg Oldie in eastern Ladakh.

The Galwan Valley is the flashpoint of a five-week border row which soon turned into a violent confrontation, the first such incident in the last 45 years. The river which originates from the Aksai Chin region, joins the Shyok River inside the territory claimed by India to form an upstream tributary of the Indus River.

The 80 kilometers-long Galwan river, which flows through the valley, in the eastern part of Ladakh, is named after Ghulam Rasool Galwan, a Ladakhi adventurer and explorer who assisted many European explorers at the turn of the 19th century.

Monday’s face-off was the biggest confrontation between the two militaries after their 1967 clashes in Nathu La when India lost around 80 soldiers while over 300 Chinese army personnel were killed in the face-off.

Both sides held a series of talks in the last few days to resolve the row.

Meanwhile, the recent confrontation between the armies of India and China was not a one-off incident. For almost the past one month, the Chinese Army has been gradually ramping up its strategic reserves in its rear bases near the LAC by rushing in artillery guns, infantry combat vehicles and heavy military equipment. China claims Arunachal Pradesh as part of southern Tibet while India contests it.

Although both sides have asserted that pending the final resolution of the boundary issue, it is necessary to maintain peace and tranquillity in the border areas.