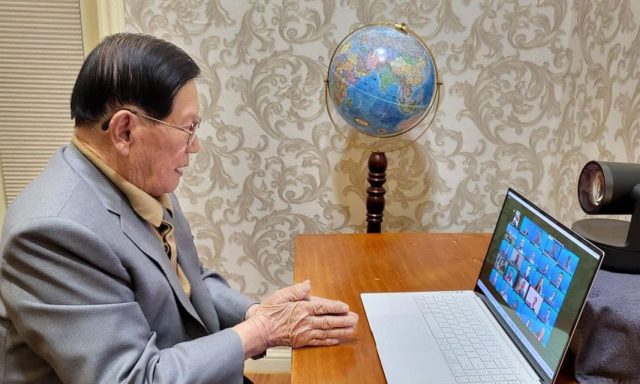 On February 18 th “Europe Press Conference of Shincheonji Church of Jesus” was held online with representatives in media and Christian denominations from 48 European countries. This event was another round of conferences previously held in the Philippines, the United States and Africa. The conference was carried out with questions from church leaders and journalists in Europe and explanation by Chairman Man Hee Lee of Shincheonji Church of Jesus.

On the questions about the decreasing trend of Christian population in European countries, Chairman Lee pointed out that today’s churches do not provide enough explanation about the words of the Bible that closely relates to daily lives of individuals and communities. Overall, he said to the participants that the detailed prophecies of the Bible were written as signs that come to occur in the future and the testifying the fulfillment of the prophecies led to the increase in the members of Shincheonji Church of Jesus in Europe.

On the mystery about the number “666” written in the book of Revelation (chapter 13) that left centuries of arguments and interpretations, Chairman Lee explained according to the Bible that the number is not about COVID-19 but a parable about King Solomon, representing a person who betrays God at the time of Revelation. He further said that “the whole book of Revelation is written in parables”, which can be understandable “when what is prophesied (in parables) is fulfilled in the physical reality.”

Next to journalists, a Church leader asked how Chairman Lee came to understand the specific year, month, day and time in Revelation 9 as the words of prophesy. “Because I saw it at the site where the event happened. I tell what I came to see and hear,” he replied.

“I was very impressed that Chairman Lee testified without even looking at the book of Revelation. And concerning certain events such as the sixth trumpet, again there was a date. How did he know this date with so much precision, until with the time?” said Samuel Kabo, Pastor of the Evangelical Reformed Church of Alès in France.

An official from the Shincheonji Church of Jesus in Europe said, “The COVID-19 pandemic has brought disease, disaster, and hardship all over the world, while also limiting religious activities. Chairman Lee highlights that it is most important to interact with each other beyond religions. We hope that this event will serve as an opportunity to restore Christianity in Europe.”