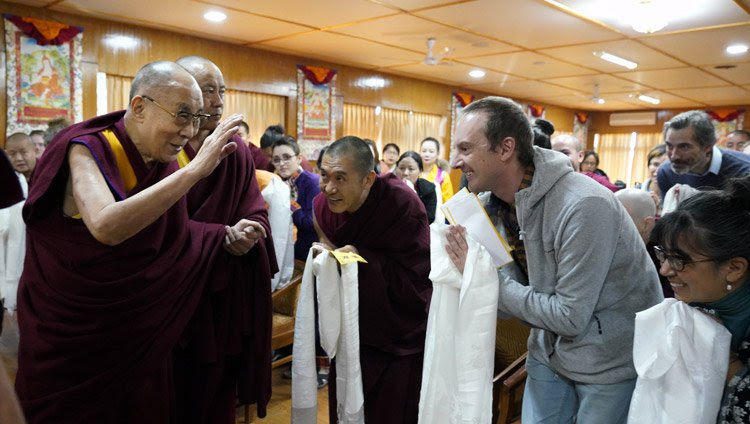 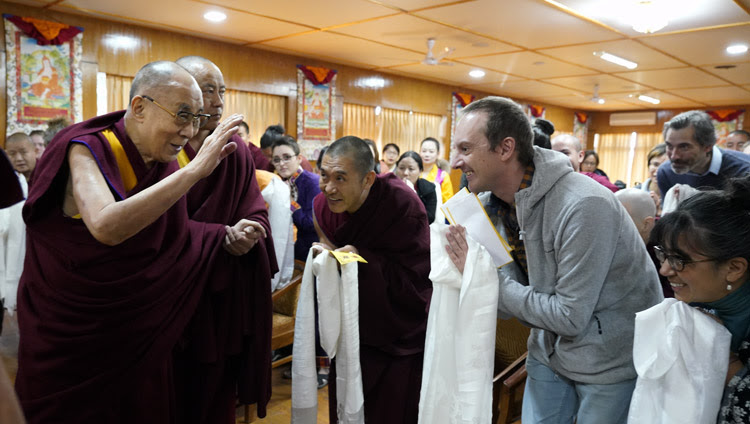 His Holiness the Dalai Lama arriving at the audience hall for his meeting with Tibetan Studies’ students at his residence in Dharamsala, HP, India on December 2, 2019. Photo by Ven Tenzin Jamphel/OHHDL

Tibetan spiritual leader His Holiness the Dalai Lama gave audience to two groups of students at his residence Monday morning. One was a group of seven, with accompanying staff, from Earlham College, Indiana, USA, who have spent three months studying at the College for Higher Tibetan Studies — Sarah. The other consisted of 14 students who are due to graduate from a two-year intensive training with the Lotsawa Rinchen Zangpo Translator Program. They were accompanied by nine teachers and staff, as well as their 14 Tibetan language tutors.

Opening his remarks to them, His Holiness outlined his four commitments. He observed that the whole of humanity comprises one community, declaring that he is trying to make a positive contribution to that community by promoting the importance of having a compassionate mind.

“In developed parts of the world material facilities are excellent and yet stress, competition and self-centredness leave people dissatisfied. I’m committed to trying to let people know that the ultimate source of happiness is within us.

“I’m also committed to encouraging harmony among religious traditions. Conflict and violence in the name of religion is unthinkable. To believe that only one religion is true and that there is only one truth is very short-sighted. In reality, in the wider world, we have several religions and truth has many aspects. Here in India inter-religious harmony is excellent. Indigenous traditions flourish side by side with traditions from abroad, setting an admirable example for others to follow.

“From a Buddhist point of view all religions involve human beings and seek to foster good human qualities like love, forgiveness, tolerance and self-discipline. Their different philosophical standpoints are varying methods to support these basic principles.

“Thirdly, I’m a Tibetan, someone in whom the majority of Tibetans place their trust. Although I’ve retired from political responsibility since 2001—we have an elected leadership to take care of that—I’m concerned about the natural environment in Tibet. Because of its altitude and cold temperature, it’s fragile and if damaged will take longer to recover than other places. Therefore, there’s a need to protect and preserve the ecology of Tibet.

“In addition, I’m concerned to keep Tibetan culture alive. Through the Nalanda Tradition, we were introduced to ancient Indian knowledge and practice focussed on non-violence, a calmly abiding mind and insight into reality.

“Tibet’s first contact with Buddhism occurred with the arrival of a Chinese princess in the seventh century. But, a century later, the Tibetan Emperor chose to introduce Buddhism from India. He invited Shantarakshita, a venerable monk, philosopher and logician, to visit Tibet. Shantarakshita was the foremost scholar of his day at Nalanda University. He advised the Emperor to initiate the translation of Indian Buddhist literature into Tibetan. Consequently, the Tibetan language was enriched and is now the language closest to Sanskrit. Indeed, Tibetan is the most accurate living language for explaining Buddhist philosophy, psychology and logic.

“My fourth commitment is to try to revive ancient Indian knowledge in India. Modern education neglects this profound understanding of the workings of the mind and emotions, which remains relevant today and has the potential to be very beneficial.

“Many of the problems we face today are of our own making. Thinking of others in terms of ‘us’ and ‘them’ leads to division and conflict, as we saw in the world wars of the last century and the invention of nuclear weapons—weapons of annihilation. Self-centredness and failing to see the world as one community leads to such circumstances. This is why we need a sense of the oneness of humanity.

“We’re all growing older, but in many ways, we’d be better off if we could restore the open, friendly and playful outlook we had as children. Children naturally recognise that we are all the same in being human.

“Just as we teach children to wash their hands and clean their teeth, to exercise and keep physically fit, we need to train them in ways to keep their peace of mind and tackle destructive emotions like anger, fear and jealousy.

“That my brothers and sisters is what I have to report to you. Do you have any questions for me?”

One of the trainee translators asked how she could best use her new-found skills for herself and others. His Holiness answered that the content of the more than 300 volumes of the Kangyur and Tengyur can be categorized as dealing with science, primarily science of the mind, philosophy and religion. While the religious material is only of interest to Buddhists, scholars and academics would do well to examine the philosophy and science.

He recommended that she look into translating texts dealing with the science of mind, paying attention to mental, as opposed to sensory, consciousness, and the science of reason. He particularly encouraged her to examine how anger, for example, destroys peace of mind and how compassion is its antidote.

Distinguishing the agent from his action, His Holiness pointed out that the agent is another human being like us deserving of compassion. It is his negative action, on the other hand, that may require you to take counter measures. However, the proper solution to conflict is to engage in dialogue with your opponent.

His Holiness advised young people faced with disruptive problems to use their intelligence and to look at the difficulty from a number of angles. Unless you take account of the reality of any given situation, he said, your response is likely to be unrealistic. You need to take a broader view.

Asked what makes him laugh, His Holiness observed that Tibetans, in general, are cheerful people. Reporting that his mother was his first teacher of warm-heartedness, he recalled that neither he nor his brothers and sisters ever saw her show an angry face. Considering all sentient beings to be kind like mothers Shantideva wrote:

And so, today, within the sight of all protectors,
I summon beings, calling them to Buddhahood.
And, till that state is reached, to every earthly joy!
May gods and demigods and all the rest rejoice!

His Holiness remarked that when he gives empowerments, he no longer performs the ritual for driving away interfering forces because as sentient beings they deserve to be included rather than driven away.

Questioned about Arya Tara His Holiness observed that she represents the embodiment of all Buddha’s activities, just as Avalokiteshvara embodies his compassion and Manjushri his wisdom. In such a context we shouldn’t regard these bodhisattvas as individual persons or deities. We can pray to Tara for long life, freedom from illness and prosperity and to fulfil the four kinds of action, peaceful, increasing, controlling and forceful.

“In Tibet,” His Holiness mentioned, “we tended to take more interest in the specialized teachings of tantra at the expense of studying the general structure of the teachings. In the early 60s, here in exile, I urged monasteries and nunneries that had previously been dedicated primarily to performing rituals and prayers to introduce programs of study.

“There was a lama a couple of generations ago who commented that if all you do is recite mantras, you risk only wearing out your nails. The key practices of the general structure of the Buddha’s teachings are cultivating the awakening mind of bodhichitta and an understanding of emptiness.”

His Holiness highlighted three levels in the acquisition of knowledge. Firstly, you develop an acquaintance with something by listening to explanations or reading about them in books. Secondly, you reflect thoroughly on what you’ve learned, which leads to conviction. Finally, you familiarize yourself with that conviction in meditation, which gives rise to concrete experience.

His Holiness disclosed that Jetsun Milarepa approached a lama who told him, “I have a teaching that enables you to attain enlightenment without any need for meditation.” Reflecting on his training in black magic, Milarepa thought that he must, therefore, be a person of some experience. However, Marpa, who he met later, put him through all kinds of hardship before introducing him to practices and teachings through which he became enlightened.

Almost as an after-thought, His Holiness divulged that three days ago he had a dream of Marpa, his teacher Naropa, the latter’s mentor Tilopa, and Guhyasamaja. He then sat for a few more minutes as the groups of students had their photographs taken with him before returning to his residence. 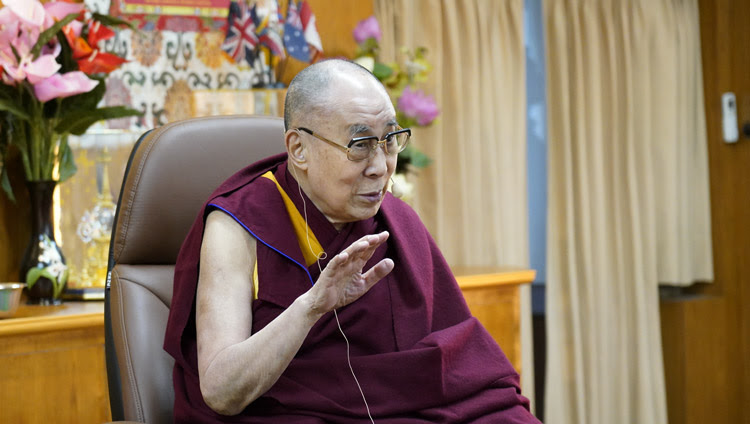 His Holiness the Dalai Lama speaking to groups of Tibetan Studies’ students at his residence in Dharamsala, HP, India on December 2, 2019. Photo by Ven Tenzin Jamphel/OHHDL A trainee translator asking His Holiness the Dalai Lama a question during his meeting with Tibetan Studies’ students at his residence in Dharamsala, HP, India on December 2, 2019. Photo by Ven Tenzin Jamphel/OHHDL 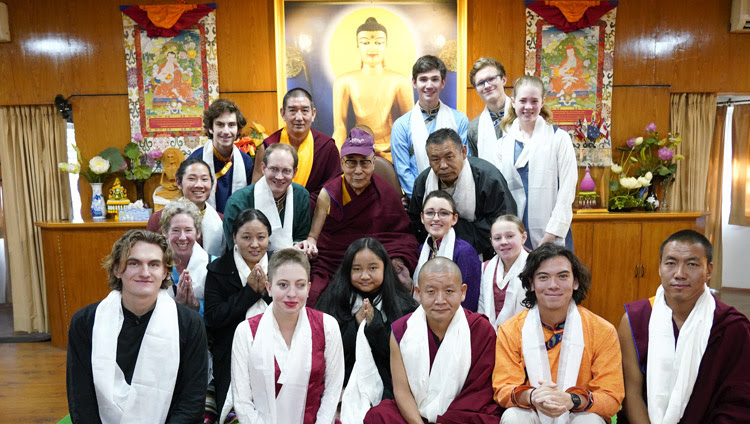 His Holiness the Dalai Lama wearing a cap presented by students from Earlham College during a group photo after their meeting at his residence in Dharamsala, HP, India on December 2, 2019. Photo by Ven Tenzin Jamphel/OHHDL