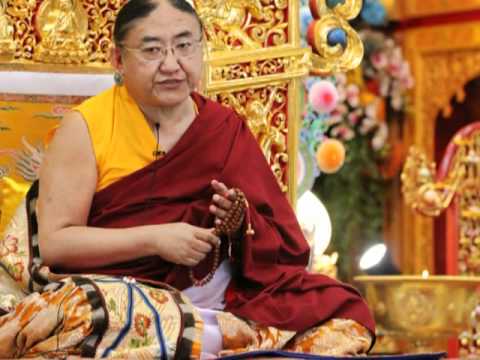 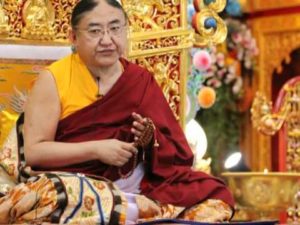 Sakya Trizin “Sakya Throne-Holder”) is the traditional title of the head of the Sakya school of Tibetan Buddhism.

The Sakya school was founded in 1073, when Khön Könchog Gyalpo (; 1034–1102), a member of Tibet’s noble Khön family, established a monastery in the region of Sakya,Tibet, which became the headquarters of the Sakya order. Since that time, its leadership has descended within the Khön family.

Sakya Trizin was born on September 7, 1945 in Tsedong, near Shigatse, Tibet. From his father, Vajradhara Ngawang Kunga Rinchen, he received important initiations and teachings in the Sakya lineage. He began intensive religious study at the age of five. In 1952, he was officially designated as the next Sakya Trizin by the Fourteenth Dalai Lama. He continued intensive training from his main teacher Ngawang Lodroe Shenpen Nyingpo and many other famous Tibetan scholars, studying extensively in both the esoteric and exoteric Buddhist traditions. HH Told to our reporter In 1959, at the age of fourteen, he was formally enthroned as head of the Sakya Order of Tibetan Buddhism. In the same year, due to the political situation in Tibet, the Sakya Trizin, his family, and many lamas and monks from the Sakya Monastery relocated to India.

To maintain the unbroken lineage of the Khon family, in 1974 Sakya Trizin consented to requests that he accept Tashi Lhakee, daughter of a noble family from Derge in Kham as his consort. In the same year his first son, Ratna Vajra Rinpoche, was born. In 1979, a second son, Gyana Vajra Rinpoche was born.Luckily ,our reporter happily interacted with HH Wife Dogma Tashi Lhakee .

After leaving Tibet, in 1963, the Sakya Trizin re-established the seat of the Sakya in Rajpur Road ,Dehradun , India, building a monastery known as Sakya Centre. Since that time, he has worked tirelessly to preserve the thousand-year-old religious heritage of the Sakya Order and to transmit its teachings to succeeding generations. He founded and directly guides a number of institutions, including Sakya Monastery in Rajpur,Road ,Dehradun  Sakya Institute, Sakya College, Sakya Nunnery in Dekyiling where over 170 nuns are receiving religious  instructions. Sakya College for Nuns, Sakya Tibetan Settlement, Sakya Hospital, dozens of other monasteries in Tibet, Nepal, and India, and numerous Dharma Centers in many countries.

The Sakya Trizin is a highly accomplished Buddhist master respected by all four schools of Tibetan Buddhism and teaches widely throughout the world. He has bestowed the extensive Lam Dre teaching cycle, which is the most important teaching of the Sakya Order over 18 times on various continents, and also transmitted major initiation cycles such as Collection of All the Tantras, and the Collection of all the Sādhanās, which contain almost all of the empowerments for the esoteric practices of the various schools of Tibetan Buddhism to hundreds of lineage holders in the next generation of Buddhist teachers. He has trained both of his sons as highly accomplished Buddhist masters, and they both travel widely, teaching Buddhism throughout the world.

The year 2009 marked the fiftieth anniversary of the Sakya Trizin’s leadership of the Sakya Order. The occasion was celebrated as a Golden Jubilee with extensive celebrations and tributes to his success in preserving and maintaining the Sakya school.HH hapily disclosed for future planning for his successor probably March 2017 his son will be 42 nd sakya trizin as per the sakya tradition.