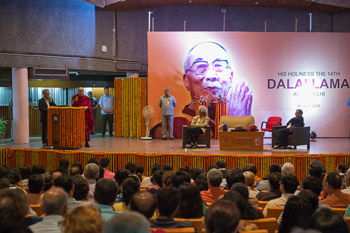 His Holiness drove to the green campus of the Indian Institute of Technology. In an auditorium before 1100 staff and students he was made welcome and presented with gifts including a traditional shawl and a practical hat. President of the Alumni Association Dr Deepak Dogra read a detailed introduction to His Holiness before IIT Director Prof K Tyagarajan expressed delight at his visit and invited him to address the audience, which he did.

“Respected elder and younger brothers and sisters, it is indeed a great honour for me to have this opportunity to share some of my thoughts with you. Many of the problems we face today we created ourselves. Although there were also great developments, during the 20th century some historians say more than 200 million people were killed in violence. Today, we should think ‘Enough’s enough’. If, as a result of such violence the world had become a better place some people might say it was somehow justified, but that is not the case.

“In fact, although many in Japan, Europe and North America say they are fed up with violence, what is taking place in North Africa, the Middle East and elsewhere is a symptom of the mistakes we made in the 20th century. Hundreds of people are dying every day of violence and starvation. To remain indifferent would be immoral. As human beings we are social animals. Our well-being is dependent on others. We function in a global economy, while climate change is affecting us all with no regard for national boundaries.

“In the context of our interdependence we have to find a way to create a happier world. We need a secular approach to moral principles that respects not only all our religious traditions, but also the views of those who have no such belief.”

He said that scientists are beginning to show that if we have a more compassionate outlook we find peace of mind, whereas a constantly agitated mind is bad for our health.

“I sometimes tease young women,” His Holiness said, “because they spend time and money on cosmetics and making their faces look good, while the more important factor is inner beauty. And by that I mean having a genuine concern for others’ well-being. That is a far sounder basis for building a good relationship.”
He observed that while our existing education system is oriented mostly towards material goals it would be more balanced if it also incorporated a sense of inner values from a secular point of view. To discover them he suggested we draw on our common experience, common sense and scientific findings. He noted, for example, that we all need friends and that friendship is based on trust, which arises when we show concern for others and conduct ourselves in an honest and truthful way. Ultimately this is related to cultivating warm-heartedness.

One of the ways of approaching that is to develop an understanding of how our minds and emotions work. His Holiness repeated that ancient Indian psychology as expressed in the Nalanda tradition continues to be relevant today. Scientists are finding it very helpful for learning about the mind. Once again His Holiness urged young Indians to pay attention to their own rich heritage. He reiterated that approached from an academic and secular viewpoint this valuable knowledge can be of interest and use to anyone. A science of mind can appeal to all 7 billion human beings and so contribute to human happiness.

His Holiness concluded his talk on ‘Ethics and Happiness’ by proposing that since action that brings joy and happiness can be regarded as ethical and action that results in misery and unhappiness can be seen as unethical, human happiness is the criterion for ethics rather than religious belief.

In the subsequent question and answer session, His Holiness was asked the secret of his robust health and he replied, laughing, that it was a secret. He added that keeping the mind open and sharp is one factor and getting 8-9 hours sleep a night is another. Another question prompted him to say that there is no place for fear in religious teachings pointing out that the Buddha had been able to explain about suffering and its origins because he also explained its cessation and the way to achieve it.

Asked where his home is His Holiness replied that of course he’d been born in Tibet, but for 57 of his 81 years he has regarded India as his home. He recalled a Tibetan proverb that wherever you’re happy you think of as home and whoever is kind to you, you think of as parents. He added that when he was setting off for his first visit to Europe in 1973 the BBC’s Mark Tully had asked him why he was going and he’d told him that he considered himself a citizen of the world. In that context what concerns him now is the well-being of all 7 billion human beings alive today.

Finally, the only woman to put a question to him at IIT asked if compassion can be taught. His Holiness recommended she read Shantideva’s ‘Guide to the Bodhisattva’s Way of Life’ (Bodhicharyavatara), which is available in Sanskrit and English. He said that hearing an explanation of it in 1967 from the Kinnauri Lama, Khunnu Lama Rinpoche, an Indian, had transformed his life. He said it contains ten chapters, the first in praise of the awakening mind. The 4th, 5th and 6th chapters explain the practices of tolerance and forgiveness, while the 7th and 8th explain the value of altruism, compassion and overcoming self-centredness. He said the 9th chapter dealing with philosophical views could only be clearly understood by reading other books too.

However, he added, having tried for 60 years, he felt that these ideas can be understood. What is involved is the gap between appearance and reality. Things appear to have an independent existence, but the reality is they are empty of such an existence. Realizing this takes effort and because knowledge is involved it requires study and thought.

The conclusion of His Holiness’s talk prompted warm and enthusiastic applause.