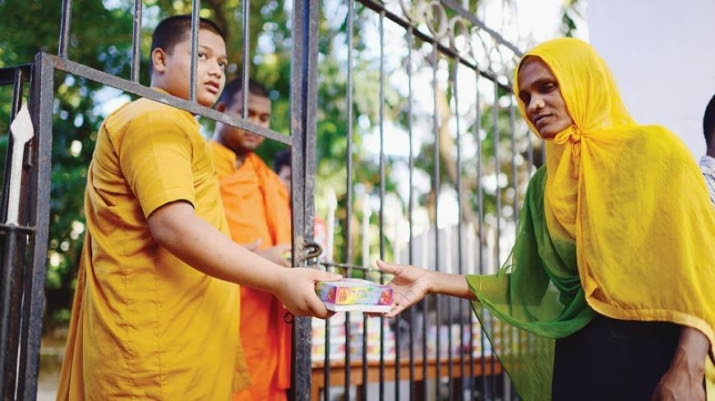 A monk gives food to a Muslim woman. From dhakatribune.com

Buddhism did not gain much support until under the reign of Asoka when Buddhism gained a toehold. The Pala Empire that control the Indian subcontinent spread many Buddhist ideologies in modern Bangladesh and builds many monasteries such as the Mahasthangarh and the Somapura Mahavihara.

Security has been beefed up  Dharmarajika Buddhist Monastery in Bangladesh’s capital Dhaka after its abbot, Ven. Shuddhananda Mahathero, received a death threat from an apparent extremist.

Dharmarajika Buddhist Monastery has appeared in the Bangladeshi and international press since 2010 after it commenced an annual mission to provide underprivileged Muslim families withiftar dinners during Ramadan, the Islamic month of fasting. Iftar meals are those eaten at the end of each day during the fast, after sunset. “We are feeding the poor Muslims who cannot afford to buy proper meals to break their fast,” Ven. Shuddhananda Mahathero told the progressive think tank International Movement for a Just World. (International Movement for a Just World)

However, on 28 June, the Dhaka Tribune reported that a letter signed “AB Siddique” had been sent to the monastery’s mailbox, telling Ven. Shuddhananda Mahathero that he would be killed in one month unless he stopped giving Buddhist teachings. The author claimed that Buddhism was Islam’s enemy, but also lashed out at other traditions, saying, “I become a true Muslim by killing Hindus, Buddhists, and Christians.” The letter threatened the high priest with a gruesome message intended to intimidate and silence: “You will be brutally hacked or shot to death. The golden statues of Gautama Buddha will not be able to save you.”

The letter included a fake phone number and other misleading contact details. After receiving it, the monastery contacted Sabujbagh police station in the neighborhood of Basabo where the monks are based, in response to which the police have beefed up security around the establishment. Ven. Shuddhananda Mahathero is not currently in Bangladesh. 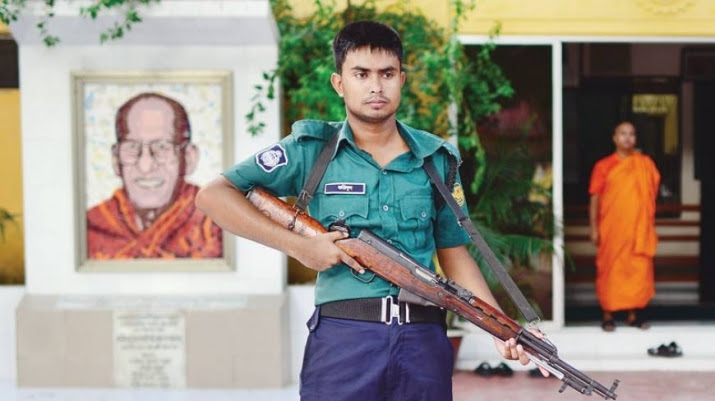 The writer claimed to be an Islamic militant, although didn’t mention an affiliation or allegiance to any extremist organization. However, the individual seems to have made a similar threat before. South Asia Terrorism Portal (SATP) reported that earlier, on 15 June, Dhaka’s Hindu Ramakrishna Mission received a similarly worded letter signed AB Siddique, with the difference that the letter claimed to be from Islamic State of Bangladesh (ISB).

The name “Islamic State of Bangladesh” seems to imply that AB Siddique is affiliated with the so-called Islamic State (known as Daesh to mainstream Muslims), or ISIS/ISIL. While there are conflicting reports about the relationship between the extremist factions in Bangladesh and IS, it is clear that a wave of Islamic extremism has swept Bangladesh over the past few years. Since January 2014 alone, more than 40 people, including people of non-Islamic faiths and agnostic or atheist bloggers and intellectuals, have been killed in extremist violence. Two organizations, a Bangladeshi militant group affiliated with al-Qaeda, and IS, have claimed responsibility for some of the murders. Bangladesh’s government has denied the presence of both IS and al-Qaeda in the country, attributing the acts to native radicals.In the Chittagong Hills, Buddhist tribes formed the majority of the population, and their religion appeared to be a mixture of tribal beliefs and Buddhist doctrines. According to the 1981 census, there were approximately 538,000 Buddhists in Bangladesh, representing less than 1 percent of the population.