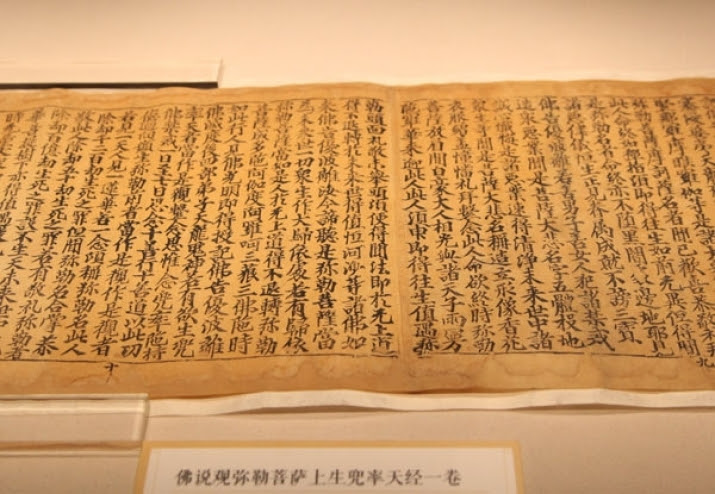 From chinadailyasia.com Woodblock printing has made tremendous contributions to the spread of knowledge, insight and artistic inspiration.

The National Library of China is currently displaying a Buddhist text as part of an exhibition totaling more than 100 ancient and classic texts from around the country. The text is a rare example of block printing, which was invented in China in the Han dynasty, before 220 CE. Buddhism has been strongly associated with woodblock printing, and spurred the printing culture of China for two millennia.

The text is a printed version of the Mile Shangsheng Jing (Sutra of Maitreya’s ascension) and dates to the year 927 of the Five Dynasties and Ten Kingdoms period (907–60). It is one of three sutras attributed to a cult of the bodhisattva Maitreya that was active throughout the classical and medieval periods in China. The Mile Shangsheng Jing on display is the second earliest surviving printed document that has been found in China, the first being the copy of the Diamond Sutranow in the collection of the British Library, which dates to the Tang dynasty (618–907). The exhibit also features a printed copy of the Diamond Sutra, but dating to the 10th century.

The three scriptures of Maitreya are “apocryphal” texts or “pseudo-scriptures” that propound the efficacy of turning to Maitreya and being reborn in Tushita Heaven, the celestial plane over which he presides. Maitreya was extremely popular in medieval China, serving as a messianic figure, with Tushita characterized as being a place of complete equality, unanimous consent, and even abundant and cheap grain (Ma 2011, 20). Such ideas of social justice even inspired rebellions against the imperial court throughout the Northern Wei (386–534), Sui (581–618), and Tang dynasties by insurrectionists like the monk Faqing (d. 515), who in the last year of his life launched a wide-scale rebellion and was subsequently killed.

In 2007, the Chinese Ministry of Culture launched a preservation project of ancient books, defined as written material produced before the end of the Qing dynasty (1644–1911)—in other words, before the modern period. As part of the project, it has been cataloguing these written records according to their language, medium (such as oracle bones, bamboo sheets, or woodblocks), and genres. The catalogue has expanded since its inception, and the latest update in May records the total number of works at 12,274.

Zhang Zhiqing, deputy director of the National Library as well as the National Center for Preservation and Protection of Ancient Books, expressed  China Daily that conservators must be dedicated and qualified, and that 22 national-level restoration studios have been established across China so that apprentices can learn traditional preservation techniques from older teachers. “To be a professional, one needs patience and persistence. It takes about five years for a learner to work independently. He or she will then need at least two decades to be a real master. It’s a challenging job,” he said.

While Zhang has estimated that about one third of the books in the catalogue are physically damaged, there is no urgency to restore them. Li Jining, a national library researcher, told China Daily that the main principle is “to save life in the first place,” with as little restoration as possible unless an ancient book is in very poor condition. “For example, the original paper also carries a lot of important information and should be kept as it is if it is not badly torn,” he said.Also during this time, as commerce began to develop to an unprecedented extent, account books, transaction receipts, trading rules, advertisements and product labels were all block-printed to facilitate business activities.