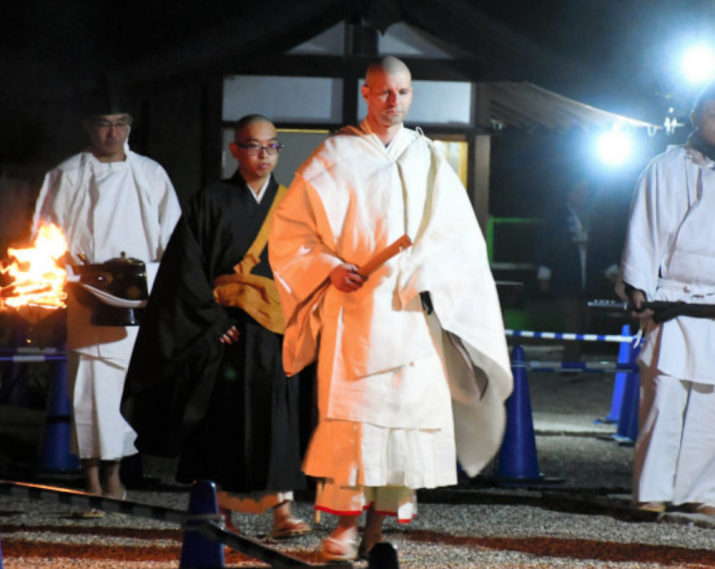 A German-born Buddhist monk in Japan has successfully passed the once-in-a-lifetime opportunity to sit for a 1,000-year-old ancient monastic examination process at the historic Buddhist temple Kofuku-ji in the former capital city of Nara—the first time the exam has been held at the temple in eight years.

By passing the exam, Gyoei Saile, 41, becomes qualified to serve as a chief priest of a sub-temple of Kofuku-ji.

Saile described the three-week experience of taking the exam as a fulfilling one: “My training as a monk will continue,” he said. “I hope to utilize the understanding and wisdom that I obtained through the exam in my practices from now on.” (The Asahi Shimbun)

A UNESCO World Heritage Site and once one of the powerful Seven Great Temples of the ancient Japanese capital Nara, Kofuku-ji, is one of two head temples of the Hosso school of Yogacara or “consciousness only” Buddhism in Japan. The history of the temple has been dated to its founding in 669 in Yamashina, present-day Kyoto. In 672, the temple was dismantled and relocated to the former imperial capital of Fujiwara-kyo. In 710, the temple was moved for a second time to its present location in what was then the newly established capital Heijo-kyo, now the city of Nara.

Originally from Hamburg, Saile studied classical Japanese literature at the University of California, Berkeley, and as a graduate student, majored in the history of Japanese Buddhist thought. Coming to Japan in 2010 as a visiting scholar at Ryukoku University in Kyoto, Saile was ordained as a Buddhist priest in 2011 at Kofuku-ji. As part of his preparations for the examination, he served as doji, assisting a senior monk at the temple. The examination process is no simple task. The examinee must undertake three grueling and strictly regulated weeks of pre-examination training, which they spend in isolated study. For the duration of the training, the monk must memorize lengthy Buddhist texts written in Kanbun, a form Classical Chinese used in Japan from the Heian period (794–1185), including learning the correct intonation for recitation.

During this period of rigorous training, the subject is permitted to eat only two meals per day: breakfast and lunch, and must sleep while seated upright. The student is allowed to leave the study room on the 1st, 6th, 11th, 16th, 21st, 26th, and 31st days of the month but only to visit certain other places, such as making pilgrimages to the nearby Kasuga-taisha Shinto shrine.

The oral examination itself, known as ryugi, lasts two hours, during which the subject is required to answer doctrinal questions from the examiner in a dialogue style. Although the contents of the exam are revealed beforehand, the questions must be answered in correctly expressed Kanbun.

Ahead of his exam, Saile was quoted say saying: “I am nervous, as this is an ancient event that has been carried out over 1,000 years. I hope to perform in the exam satisfactorily and meet everyone’s expectations.” (The Mainichi)

Hosso school monastics are permitted to undertake the exam only once in their lifetime. In the past, failing has resulted in the monk’s expulsion. Saile is the first Kofuku-ji monk to sit for the the exam in eight years. It also marks one of the rare occasions that a foreigner has passed the exam.

“It was an honor for me to be named to take the exam that has a history of more than 1,000 years, and I am so grateful,” Saile said afterward completing the exam on the night of 13 November. (The Asahi Shimbun) Five-story pagoda and East Golden Hall at Kōfuku-ji. From wikipedia.org

Buddhism and Shinto are the two most widespread religious traditions in modern Japan, with 79.2 per cent of the population identifying as practicing Shinto and 66.8 per cent identifying as Buddhists, indicating a high level of overlap between the two traditions, although, somewhat paradoxically, a majority of Japanese also identify as atheists for a number of cultural reasons. Christians represent 1.5 per cent of the population, while other religions make up a combined 7.1 per cent, according to data for 2017. The most popular schools of Buddhism are Nichiren, Pure Land, Shingon, and Zen.