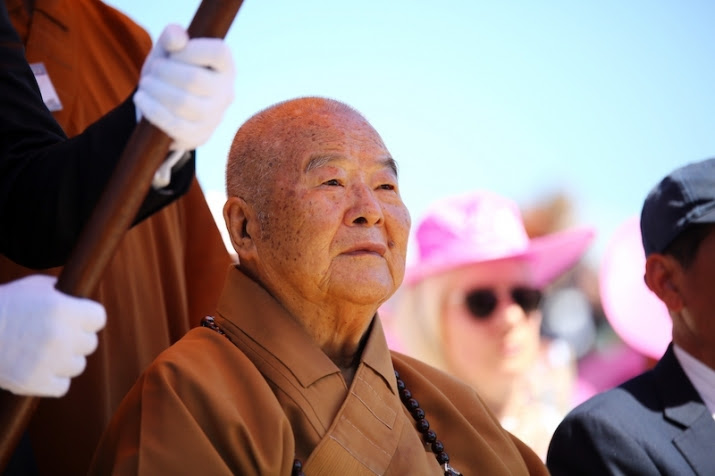 Master Hsing Yun. From nantien.edu.au
Jiangsu  one of the leading provinces in manufacturing electronics and apparel items, with its capital in Nanjing. Jiangsu is the second smallest, but the fifth most populous and the most densely populated of the 22 provinces of the People’s Republic of China. Jiangsu has the second highest GDP of Chinese provinces, after Guangdong.[

On 27 October, about 240 Buddhist monks and scholars from 30 countries gathered for the First Cultural Forum of the Heart Sutra in Nanjing, the historic capital of Jiangsu Province in eastern China. The famous Heart Sutra contains around 260 characters and is considered a pithy and profound summary of the key doctrines of Mahayana Buddhism. The participants shared their perspectives on the sutra and its potential for informing cultural exchange.

Among the participants was Naresh Man Bajracharya, vice-chancellor of Lumbini Buddhist University in Nepal, who spoke about the contact facilitated between Nepal and China by Buddhism. According to Bajracharya, an artist who was from modern Nepal (but little else is known about him) was invited by the imperial court to build the White Pagoda in Beijing’s Miaoying Temple during the Yuan Dynasty (1271–1368). (China Daily) The current structure still exists but is dated to the Ming era (1368–1644). After the opening ceremony, 30 monks and scholars wrote the Heart Sutra on a long scroll together, each writing one verse in his or her own language.

According to China Daily, the forum also provided a platform for countries interested in China’s Belt and Road Initiative. The Belt and Road Initiative refers to a two-pronged strategy launched by the Chinese government with the hope of developing economic and cultural co-operation along the countries of the Eurasian continental landmass. The plan’s two aspects include the Silk Road Economic Belt, which encompasses the overland route across Central Asia and Russia all the way to Belarus and Rotterdam, as well as the 21st Century Maritime Silk Road, which connects the ports of China to those of Southeast Asia, the Indian subcontinent, the Gulf and Africa, and the Mediterranean.

“I think the Belt and Road Initiative proposed by President Xi Jinping will make a great contribution to world stability and people’s unity,” said Master Hsing Yun, founder of Fo Guang Shan Monastery in Taiwan. “Through the overland and marine Silk Road, Buddhism connected Asia with Europe in the past,” he added, explaining that China’s plan would assist in the revival of Chinese culture. (China Daily)

The One Belt, One Road plan invokes the prestige and romance of the Silk Road, an ancient network of trade routes that were central to economic, military, religious, and cultural interaction across Eurasia for millennia. Chinese pilgrims also travelled along the Silk Road to India to access what were perceived to be the authentic Buddhist scriptures. Xuanzang (602–64) made an overland trip to India along the Silk Road to collect Buddhist sutras, many of which were translated from Sanskrit to Chinese, contributing to the propagation of Buddhism in China.

“We shall follow in the footsteps of master Xuanzang, using the wisdom of the Heart Sutra to resolve modern-day problems, and contribute to a world of peace and harmony,” said Ven. Xincheng, vice-president of the Buddhist Association of China and one of the most senior and influential Buddhist leaders in the country. (China Daily)

Ven. K. Sri Dhammaratana, a senior Malaysian monk, argued that it was crucial to use technology to teach Buddhism to younger generations. “We must create some new programs to reach out to young people without changing the basic teachings of the Buddha.” (China Daily)

After the forum, the participants visited Niushoushan Temple in Nanjing, where a rare skull relic of Shakyamuni Buddha has been enshrined since 2015.After communist takeover, Beijing was made capital of the People’s Republic and Nanjing was demoted to be the provincial capital of Jiangsu.