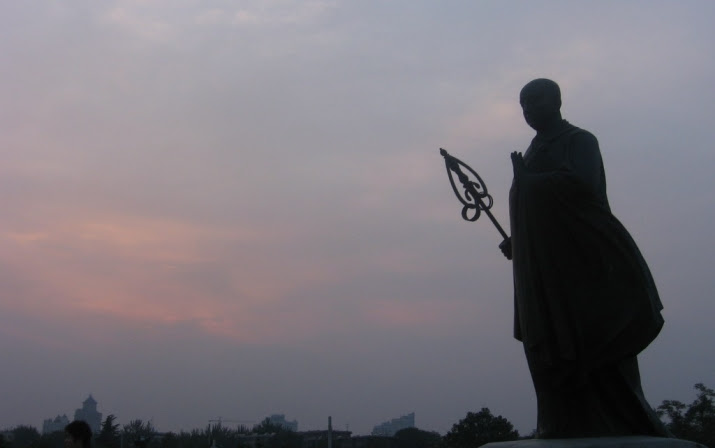 Statue of Xuanzang at the Great Wild Goose Pagoda in Xi’an. From wikipedia.org
Chinese pilgrims played a key role in the exchanges between ancient India and ancient China. They introduced new texts and doctrines to the Chinese clergy, carried Buddhist paraphernalia for the performance of rituals and ceremonies, and provided detailed accounts of their spiritual journeys to India. Records of Indian society and its virtuous rulers, accounts of the flourishing monastic institutions, and stories about the magical and miraculous prowess of the Buddha and his disciples often accompanied the descriptions of the pilgrimage sites in their travel records. In fact, these travel records contributed to the development of a unique perception of India among members of the Chinese clergy. For some, India was a sacred, even Utopian, realm. Others saw India as a mystical land inhabited by “civilized” and sophisticated people. In the context of Chinese discourse on foreign peoples, who were often described as uncivilized and barbaric, these accounts significantly elevated the Chinese perception of Indian society.

The director general of the Archaeological Survey of India (ASI), Dr. Rakesh Tewari, is planning to research and “retrace the footsteps of ancient travellers Fa-Hien [Faxian] and Hiuen Tsang [Xuanzang],” about 1,500 years after they undertook their incredible journeys on foot from China to India.

The proposed project’s name, “Kashi to Kashgar,” refers to a nearly 2,600km journey from Varanasi (also known as Kashi) in Uttar Pradesh, India, to Kashgar, an oasis city in China’s Xinjiang Autonomous Region. Located near the Chinese border withAfghanistan, Kyrgyzstan, Pakistan, and Tajikistan, Kashgar has a rich history of more than 2,000 years and served as a trading hub on the Silk Road between China, the Middle East, and Europe.

Xuanzang (602–64) passed through Kashgar on his return journey from India to China, returning to the Tang dynasty (618–907) capital of Chang’an in 645. His predecessor Faxian (337–422) crossed the freezing deserts and perilous mountain passes from China into northwest India during the reign of Chandragupta II (r. 380–415). He did not, however, pass through Kashgar on his way home, as he visited modern-day Sri Lanka and was shipwrecked on an island (possibly Java) before returning to the coastal province of Shandong in eastern China. Both monks published important travelogues of their pilgrimages.

According to sources cited by India Today, Tewari will embark on a three-month road trip to China to retrace the specific portion of the land route between Varanasi and Kashgar. However, the details of the trip are unclear. An anonymous source, described as a renowned historian, told India Today: “It’s strange the head of India’s premier conservation agency, who should be looking after administrative work, will be out on such a long journey.”

While Tewari told The Economic Times that the sojourn would focus on the “spirit of Buddhism,” he was tight-lipped about the specifics: “While you have heard they [sic] names of Hieun Tsang and Fa Hien, there were many others who were instrumental in the spread of Buddhism. The project does not involve any excavation, but I am not in position to share any details.” (The Economic Times) Dr. Rakesh Tewari, director general of the Archaeological Survey of India. From dailymail.co.uk
The trip involves some of the highest-ranking echelons within the Indian government: Tewari’s plan was approved by Dr. Mahesh Sharma, the minister of culture, and the prime minister’s office has also given permission. The Ministry of Culture has written to the Ministry of External Affairs for faster clearance as it involves entry into China. In the project proposal, Tewari claimed that it would help “in creating political stability, friendly cultural atmosphere, and also in boosting economic development of the region.” (The Economic Times)

A financial plan for the project is being worked out, with a projected price tag of US$747,842, which includes the urchase of an SUV to traverse the harsh sandscapes of China’s deserts. A team of assistant archaeologists, photographers, surveyors, and logistical staff will follow Tewari in another vehicle.

Tewari first prepared the proposal in 2006, when he was director of the Uttar Pradesh Archaeological Department. Due to retire in May 2017, Tewari wants to accomplish his dream project as early as possible.

Faxian, Xuanzang, and Yijing were among hundreds of Chinese monks who made pilgrimages to India during the first millennium CE. The detailed accounts of their journeys make them more famous than others. These travel records are important historical resources for several reasons. First, they provide meticulous accounts of the nature of Buddhist doctrines, rituals, and monastic institutions in South, Central, and Southeast Asia. Second, they contain vital information about the social and political conditions in South Asia and kingdoms situated on the routes between China and India. Third, they offer remarkable insights into cross-cultural perceptions and interactions. Additionally, these accounts throw light on the arduous nature of long-distance travel, commercial exchanges, and the relationship between Buddhist pilgrims and itinerant merchants.