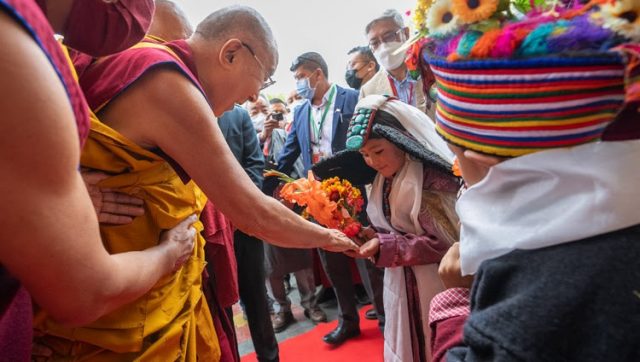 Leh, Ladakh, UT, India – As soon as His Holiness the Dalai Lama reached the pavilion at the teaching ground, Chhering Dorjey Lakruk, Vice President of the Ladakh Buddhist Association (LBA) made the customary offering of a mandala and other representatives presented silk scarves to him. Chanting of the ‘Prayer of Three Continuous Practices’ was followed by a recitation of the ‘Heart Sutra’. 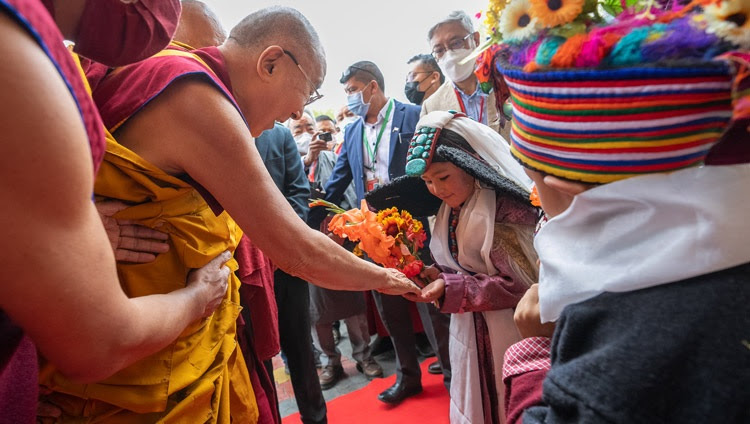 His Holiness the Dalai Lama greeting a young Ladakhi girl in traditional dress as he arrives for the second day of teachings at the Shewatsel Teaching Ground in Leh, Ladakh, UT, India on July 29, 2022. Photo by Tenzin ChoejorHis Holiness informed the public that since today is the first day of the sixth month of the Tibetan lunar calendar, early this morning he offered prayers and offerings to Palden Lhamo. He then led the congregation in reciting a prayer in praise of the female Dharma Protector that he had composed.

Turning to Shantideva’s ‘Entering the Way of a Bodhisattva’ His Holiness explained that it is an effective text to follow if you wish to lead a meaningful life.

“Tibetans and people of the Himalayan region are familiar with mantras such the six-syllable mantra of Avalokiteshvara (Om Mani Padme Hung) and mantra of Arya Tara (Om Taré Tuttaré Turé Svaha), but they should also consider themselves fortunate and try to lead a meaningful life by being warm-hearted and focussed on ultimately attaining enlightenment.

“Having given a general introductory teaching yesterday, today I’ll resume my reading of the text right from the start.”

He began to read the second chapter, making the occasional comment as he gave the transmission of Shantideva’s book. 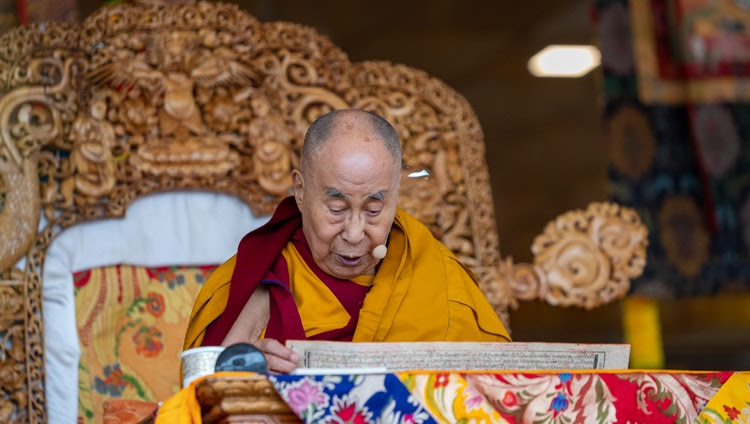 His Holiness the Dalai Lama reading from Shantideva’s ‘Entering the Way of a Bodhisattva’ on the second day of teachings at the Shewatsel Teaching Ground in Leh, Ladakh, UT, India on July 29, 2022. Photo by Tenzin Choejor“‘Entering the Way of a Bodhisattva’ is an excellent guide to the ways to cultivate the awakening mind of bodhichitta. I keep a copy beside my bed and read it whenever I can. What’s more, people interested in learning about emptiness, will benefit from studying the ninth chapter of this book.

“Followers of the Nalanda Tradition are familiar with the practice of generating the awakening mind which gives rise to both health and happiness. When we take refuge in the Buddha, Dharma and Sangha, we have to understand that the Dharma is something we must develop within so we can traverse the paths and grounds culminating in the omniscient state of Buddhahood.

“The mantra of the ‘Heart Sutra’ indicates the step-by-step path to Buddhahood. 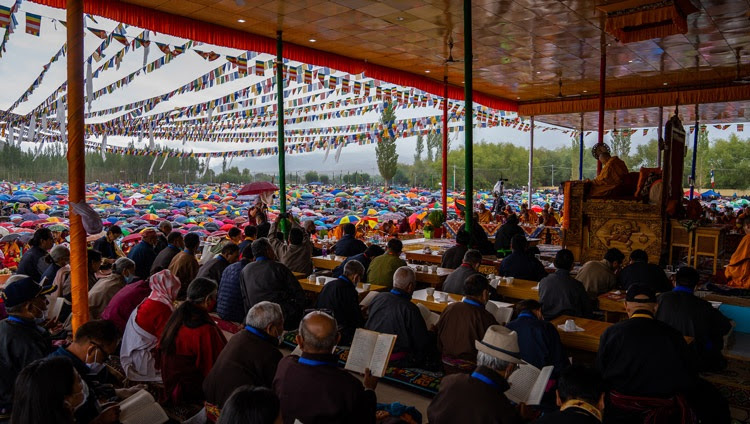 Umbrellas covering most of the crowd as rain falls during the second day of His Holiness the Dalai Lama’s teachings at the Shewatsel Teaching Ground in Leh, Ladakh, UT, India on July 29, 2022. Photo by Tenzin Choejor“Our final goal is the attainment of enlightenment, and to reach it we must combine the awakening mind, which is part of the method aspect of the path, with an understanding of emptiness, which consists of the wisdom aspect of the path. We need to keep these in mind and train ourselves to follow the path to enlightenment in life after life.”

Reading the 8th verse of the second chapter of the book,

Eternally shall I offer all my bodies
To the Conquerors and their children
Please accept me, you Supreme Heroes,
Respectfully shall I be your subject.

His Holiness remarked that the main purpose of offering yourself as a servant to the Buddhas and Bodhisattvas is to work altruistically for the welfare of all sentient beings.

Just as the previous Ones Gone to Bliss
Gave birth to an Awakening Mind,
And just as they successively dwelt
In the Bodhisattva practices; 2/23

Likewise, for the sake of all that lives,
Do I give birth to an Awakening Mind,
And likewise shall I too
Successively follow the practices. 2/24

His Holiness reported that he reflects on the awakening mind as soon as he wakes up in the morning. These verses are used as formula for generating bodhichitta and taking the bodhisattva vows. The remaining verses of third chapter highlight the beneficial qualities of bodhichitta. His Holiness then read steadily through the rest of the book, making occasional comments on the way. 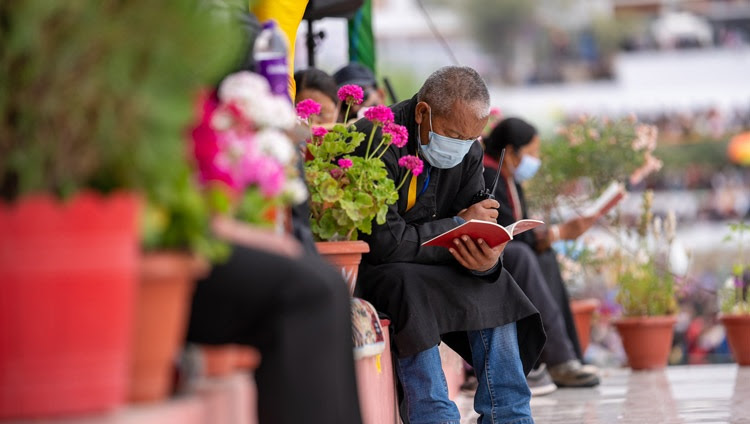 Members of the audience following the text as His Holiness the Dalai Lama reads from Shantideva’s ‘Entering the Way of a Bodhisattva’ on the second day of teachings at the Shewatsel Teaching Ground in Leh, Ladakh, UT, India on July 29, 2022. Photo by Tenzin ChoejorAt the beginning of the ninth chapter His Holiness noted that the instructions contained in the previous chapters are all intended to support the development of the perfection of wisdom, which is the focus of this chapter. He clarified that the way the word ‘mind’ is used in the second stanza of Chapter Nine refers to a dualistic perception. Generally speaking, there are various aspects of mind such as the omniscient mind of a buddha, the non-dualistic mind of a realized being who is totally absorbed in emptiness; as well as valid cognitions, assumptions, direct perceptions, inferential cognitions, doubts and so forth.

Having completed the transmission of the book in one session, His Holiness urged his audience to read it and use it as a basis for cultivating bodhichitta and an understanding of emptiness.

“We’ll meet again tomorrow,” he announced, “when I’ll be giving the empowerment of Avalokiteshvara, the embodiment of great compassion.