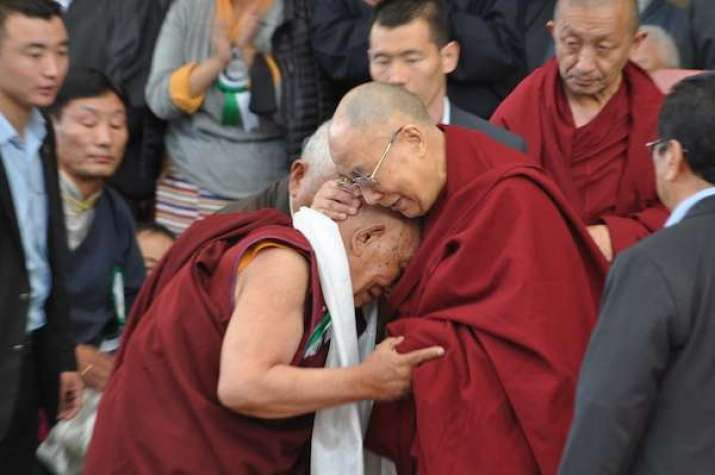 On behalf of all members of the Buddhisttimes .news I offer my deepest condolences on the passing away of world renowned  Dr.  Yeshi Dhonden, Buddhisttimes.news and the Buddhist Fraternity this gap will be difficult to fulfill.

In this moment of grief our prayers and best wishes are with all followers of the Buddha Dhamma around the world,especially with our brethren in chinese and buddhist culture.

Dr. Yeshi Dhonden, a Tibetan monk and practitioner of traditional Tibetan medicine who earned renown working for some 20 years as the personal physician to His Holiness the Dalai Lama, has died in Dharamsala, northern India, at the age of 93. According to reports, Yeshi Dhonden passed away at his residence in McLeod Ganj on Tuesday night.

A family member was quoted by the Tibet Sun news website as saying that Yeshi Dhonden had complained of respiratory difficulties on Monday, so they had sought immediate medical attention.

“Aside from the respiratory problem, Emchi-la had no other health issues. He died at home today at 2:53am, with family members at his bedside,” the family member said. (Tibet Sun)

A cremation ceremony has been scheduled for Friday morning in McLeod Ganj.

Dr. Yeshi Dhonden was born on 15 May 1927 to a poor family in the village of Namro in central Tibet’s Lhoga District. He entered monastic life when he was six years old and, from the age of 11, studied at Lhasa Men Tsee Khang under, among other teachers, his uncle the famous Tibetan doctor and teacher Khenrab Norbu, passing his exams with distinction at the age of 20.

In 1959, Yeshi Dhonden accompanied the Dalai Lama when he fled the Chinese invasion of Tibet. In India, Yeshi Dhonden was instrumental in the founding of the Tibetan Medical and Astro-science Institute (Men-Tsee Khang) in Dharamsala. From 1961–80, Yeshi Dhonden served as personal physician to the Dalai Lama, and also held office as both director and principal of Men-Tsee Khang until 1979. He continued to practice medicine from a small private clinic he established in Dharamsala in 1969 until his retirement earlier this year.* Dr. Yeshi Dhonden receives an audience with His Holiness the Dalai Lama. From tibet.net

In 2018, Yeshi Dhonden was awarded the Padma Shri, India’s fourth-highest civilian award, by Indian president Ram Nath Kovind for his contributions to the field of medicine through traditional Tibetan medicine. He became the second member of the Tibetan diaspora to receive the prestigious award after educationist, Tibetologist, and vice chancellor of the Central University for Tibetan Studies Geshe Ngawang Samten, who was awarded the medal in 2009 for his contributions to education.

Also known as Sowa-Rigpa, Traditional Tibetan medicine employs a complex approach to diagnosing illness, incorporating techniques such as pulse analysis and urinalysis, and treating ailments through the application of behavioral and dietary modification, naturally sourced medicines composed of herbs and minerals, and physical therapies such as acupuncture, moxibustion, cupping, and blood-letting. It also emphasizes Buddhist spiritual practices, including meditation and prayer.

During his years as a physician, Dhonden relied primarily on his own senses to ascertain the health of vital organs and diagnose his patients’ ailments. “I don’t go for tests like X-ray and all. I trust myself. I just test the pulse and the urine,” he once explained, noting that the color, bubble formations, sediment, and smell of urine samples were all taken into account when making a diagnosis. (France 24)

Known as one of the world’s foremost practitioners of traditional Tibetan medicine, Yeshi Dhonden successfully treated patients with all manner of ailments from his small clinic in Dharamshala near the Dalai Lama’s official residence. Over the years, he gained considerable international fame as a highly effective and beneficial physician—particularly as a cancer specialist. Yeshi Dhonden retired from seeing patients on 1 April this year due to old age.**

In a Facebook post in response to the news of Yeshi Dhondon’s passing, Dr. Eliot Tokar, a New York-based practitioner of traditional Tibetan medicine and a former student,*** related:

In my years studying and traveling with Dr. Dhonden, in reading his works and attending his lectures, his importance as a teacher, practitioner and upholder of the traditional practice of our Tibetan medicine tradition was preeminent. . . .

Dr. Dhonden was one of the few of his generation who was able to maintain a continuous practice with little to no interruption resulting from the geopolitical events that affected Tibet and its culture in the mid-20th century. He famously, with my teacher Dr. Trogawa Rinpoche and a small number of others, re-established Tibetan medicine education and practice in exile under the auspices of [His Holiness the Dalai Lama] in Dharamsala, India in the early 1960s. . . .

This great physician, teacher and Buddhist practitioner will be missed. But his work and teachings will continue to inspire me and many others who were privileged to know him.