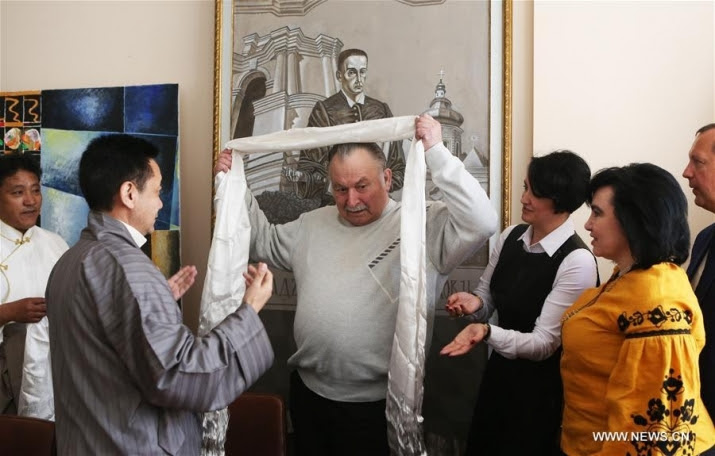 More than 30 religious scholars, philosophers, historians, and Buddhists from China and Ukraine gathered for a roundtable discussion on 22 May at the Institute of Philosophy in the National Academy of Science in Ukraine, sharing their perspectives on the philosophical, religious, and scientific aspects of Buddhism.

The head of the Chinese delegation for Tibetan cultural exchange, Zheng Dui, said the discussion was intended as an opportunity to share the historical and cultural heritage of Buddhism with the people of Ukraine: “We have organized a delegation for cultural exchanges, which includes the representatives of the local government, scientists, and also a recognized living Buddha, to help Ukrainians better understand the special aspects of Tibetan Buddhism.” (Xinhuanet)

According to Anatoly Kolodny, president of the Ukrainian Association of Religious Scientists, Buddhism is growing in popularity in Ukraine as a philosophy for helping people to build a harmonious society. “In Buddhist practices, Ukrainian people have an opportunity to learn how to be tolerant to any person—with other views, with a different lifestyle,” Kolodny said. “There is a rivalry between different religious confessions in Ukraine, but there is no such a thing in Buddhism. The representatives of other religions must learn from Buddhism how to maintain friendly attitude towards everybody.” (Xinhuanet)

Interest in Buddhism in Ukraine first arose in the 19th century, even though the country was exposed to Buddhism, at least on a superficial level, for many centuries prior due to contact between Ukrainian Cossacks and Kalmyks who profess Buddhism. The growth of Buddhism in Ukraine, however, was stunted by the Soviet government, which banned all religious teachings that differed from Soviet ideology. In the late 1980s, at the end of the Soviet era, interest in Buddhism flourished once again, with the first public Buddhist teachings taking place in 1989. An estimated 5,000 people practice Buddhism in Ukraine today.

In 2006, His Excellency Garchen Rinpoche and his students opened the Drikung Kagyu Center in Kyiv. Other Buddhist centers in Ukraine include the Nyingma Center, Rangjung Yeshe Center, and four Shambhala Centers. Besides the Tibetan Buddhist schools, Ukraine also has practitioners of Zen Buddhism, Nichiren Buddhists from the Nippondzan-Mehodzi Monastic Order, and Vipassana meditation followers of S. N. Goenka, a Burmese-Indian teacher.

Chinese Buddhism additionally also gives us a honorable locally-born Buddha, Kwan-yin or Avalokitesvara ，who is Chinese people’s own Buddha for saving the people form disasters and despair. It is the only Buddhist Bodhisattva living in people’s heart. Besides, Chinese art is directly influenced by Chinese Buddhism. Dunhuang Mogao Grottos, Datong Yungang Grottos and Luoyang Longmen Grottos are all the treasures of Buddhist culture in China.