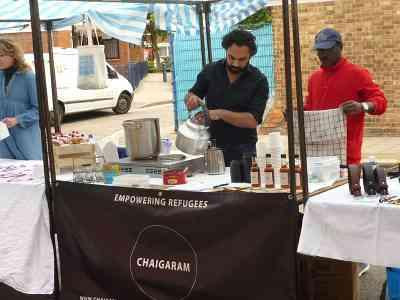 Pranav Chopra is not just making Indian-style tea more popular in London, he is also giving jobs to unemployed refugees

A TV programme about Iraqis who fled to Europe has inspired an Indian management consultant to start a chai stall business in London that employs refugees from across the world.

Pranav Chopra, who was born and raised in Delhi, left his full-time job as a management consultant in London in February to focus full-time on Chaigaram[meaning ‘hot tea’]. He now has stalls at two London food markets manned by refugees and sells chai to more than 20 independent cafes.

So far the business has helped seven refugees from Syria, Eritrea, Iraq, Sudan and Pakistan. They either work on the chai stalls or pack and blend the Fairtrade Assam tea.

Serving a cup of £3 (Rs 250) steaming hot chai at Druid Street Market in South London, Chopra says his aim was to help refugees get a job in the UK. Working for Chaigaram and interacting with locals boosted their confidence, improved their communication skills and gave them critical work experience, he said.

He now plans to open a series of tea stalls across London and offer them as franchises to refugees. “The idea is to promote entrepreneurship among refugees,” he said.

“A lot of people in the UK now drink chai lattes but I want to make masala chai a trend,” he said. Chaigaram sells four blends, all Chopra’s great grandmother’s recipes. “It’s great to be using my Indian connection to make a social impact,” he said.

He also plans to sell tea from the refugees’ own countries in the future such as Chai Istikan, a beverage from Iraq, and Mate from Syria.

The idea came to him when he saw a TV programme about the global refugee crisis in Europe. “This refugee family was voluntarily heading back to Iraq from Germany and it showed a 12-year-old saying: ‘I don’t want to go back but I have to, I also know I am going to die.'”

Those words affected Chopra, 33, who left India at the age of 12. “How much do you have to hate Germany to go back to Iraq?” he said. He did some research and discovered that many refugees were not integrated in Europe and one of the best ways to help them was to offer employment.

“It is great to get away from my hostel for 10 hours. It’s a harrowing place,” says the 44-year old, as hip Londoners wander past. He shares a hostel with people released from prison and the homeless.

Elsamani was flown to London for medical treatment from Cairo in 2013 after being tortured in Sudan, which has been ravaged by civil wars for decades.

“The situation now is worse than before so I can’t go back,” he said,

Despite having a diploma in media and a science degree and having worked as a journalist for the Arabic media for 24 years, he has not yet found a job in the UK. He said he had applied for more than 1,000 jobs, even cleaning roles, but only had one interview, which he did not get.

He said Britain was “hard.” “In Sudan you have your community, you know how to manage your life. If you don’t get a job you can do your own business. Here you have to start from scratch and it’s a different culture and a different system,” he said.
But the Chaigaram job has helped. Besides the £50 (Rs 4,000) he earns for working one day a week at Chaigaram, he also gets a chance to improve his English.
He now has ambitious plans to start his own media agency which will focus on stories about Africa and refugees in London. Till then, he’s busy brewing shai as they call it in Sudan.
Share this...