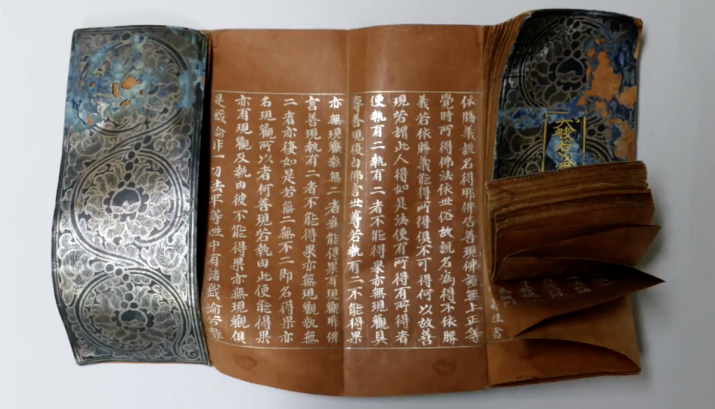 By Shyamal Sinha
A Goryeo Kingdom Buddhist scripture was found inside a Buddha statue at Silsangsa Temple in Namwon, North Jeolla Province.The Research Institute of Buddhist Cultural Heritage said that it discovered “Daebanyabaramildagyeong,” a foldable scripture written in silver letters, inside the head of a seated Budda statue at the temple. There are only four such scriptures found in Korea. Among them, the one found inside the Vairocana Buddha of Girim Temple in Gyeongju, is designated as national treasure No. 959

A Goryeo-era Buddhist scripture believed to date to the 14th century has been discovered concealed within the head of a Buddha statue at a Buddhist temple in Korea. The Research Institute of Buddhist Cultural Heritage said the ancient document was found when the statue underwent a 3D computer tomography (CT) scan.

Measuring 11.8 by 30.6 centimeters and inscribed in silver letters on paper made from fibers of the mulberry tree, the foldable scripture was identified as a transcription of theDaebanyabaramildagyeong—the 396th fascicle of the 600-volume Mahaprajnaparamita (GreatPerfection of Wisdom) sutra, an encyclopedic collection of texts belonging to the same category as the Heart Sutra. Expounding the main Sutric paths a Bodhisattva must practice to attain Buddhahood, this voluminous work, which represents the fundamental philosophical work of Mahayana Buddhism, was translated by the renowned Chinese Buddhist monk, scholar, and traveler Ven. Xuanzang (c. 602–64), who brought three copies back to China from India.

“It is the first time to use the 3D-CT in our research on a Buddha statue,” said researcher Lim Seok-kyu at the Research Institute of Buddhist Cultural Heritage. “Through the research, we traced that the Silsang Temple Buddha contains a folded paper and letters written with a metallic material. Because we were deeply concerned about its condition, we decided to retrieve it for better preservation.” (The Korea Times)

The seated Buddha statue, created in the early Joseon period (1392–1897), is one of about 20 extant Buddhas images in Korea made in the same style, although the statue’s outer appearance has been altered over the years due to repairs. The CT scan performed by the Research Institute of Buddhist Cultural Heritage also revealed the statue’s original form under the gilded exterior.

The remarkable find bears an inscription indicating that it was donated by one Yi Jang-gye and his wife, although no historical records have been found that shed any further clues as to the donor’s identity. “The scripture was made to honor their ancestors and to ward off bad luck,” said Lim. (The Dong-A Ilbo)

“[A] Buddhist scripture written in silver letters is very rare,” said Song Il-gi, a library science professor at Chung-Ang University. He noted that only four such scriptures have previously been found in Korea. Among them was one discovered inside a statue of Vairocana Buddha at Girim Temple, in the coastal city of Gyeongju, that has since been designated as a national treasure. (The Korea Times)

Located in Namwon, in South Korea’s North Jeolla Province, Silsangsa (True Nature Temple), a branch of Geumsan Temple in the city of Iksan, belongs to the Jogye Order of Korean Buddhism, a school of Korean Seon (Chan/Zen) Buddhism. Although renovated and rebuilt several times over the centuries, Silsangsa is believed to have originally been constructed during the reign of the Silla-era king Heungdeok (r. 826–36) by the monk Hongcheok, a student of the Chinese monk Zhiyi (538–97), founder of the Tiantai school of Chinese Buddhism. Silsangsa is the oldest temple among Korea’s nine mountain schools of Seon Buddhism.