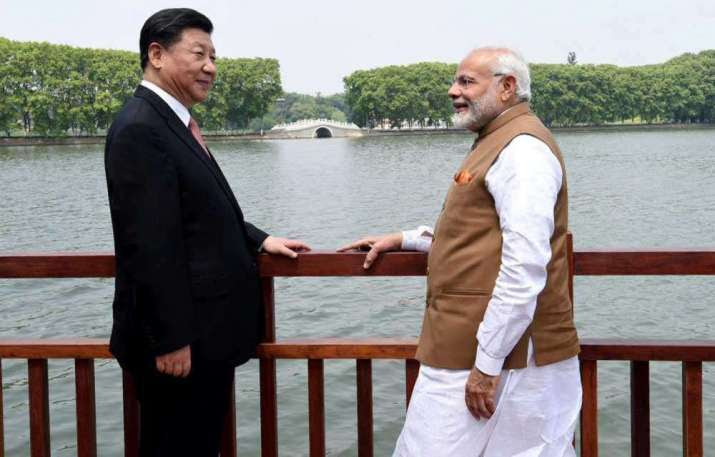 Xi and Modi in Wuhan, April 2018. From deccanherald.com

Chinese President Xi Jinping is in India this afternoon to meet with Indian PM Narendra Modi in Chennai. The informal summit will last until Saturday. Both Chinese and Indian media, in anticipation of this second informal meeting between the leaders of Asia’s two largest economies, have stressed that present differences should not impede a cooperative partnership that can be sustained into the future.

2017 saw Sino-Indian relations deteriorate over the Doklam standoff in Bhutan from June to August, while various territorial and political disputes in the Himalayan region remain the focal sticking point for China and India. However, dialogue and rapprochement has gathered pace steadily since the resolution of that incident. Thursday, a China Daily editorial noted: “Xi’s meeting with Modi in the southern Indian city of Chennai on Friday and Saturday is expected to focus more on the two countries’ historical and present differences, and how to move beyond them to realize their cooperation potential.” (China Daily)

After their afternoon meeting, Xi and Modi will visit the nearby scenic town and heritage site of Mamallapuram, which has a long history of trading and cultural connections with China.

Mahabalipuram has a rich history and heritage that is well-preserved to date and speaks volumes of its glory.

Mahabalipuram is one of the oldest cities in India. Present day, it is known for its great monuments, cave sanctuaries and sculptures. A monument complex at Mahabalipuram, known as the Group of Monuments, with all its rock art and relief sculptures, is a UNESCO world site.

Archeological excavations have unearthed Chinese coins dating back to as early as two millennia ago. (India Today) The symbolism of the site has not been lost on the Global Times, which noted: “In the seventh century, during the heyday of the Pallava Dynasty, Xuanzang, a famous monk hailing from the Tang Dynasty (618–907), visited the capital of the Pallavas, which was not far from Mamallapuram.” (Global Times)

Chinese media reflected a consensus among the Chinese political leadership that while the Modi government erred in its bifurcation of Buddhist-majority Ladakh and Jammu-Kashmir, Chinese influence in South Asia would remain deficient without a positive relationship with India: “This not only demonstrates China’s respect for India’s great power status but also indicates that China is well aware that territorial and border disputes can only be resolved through fair negotiations rather than unilateral actions or military threats,” noted the Global Times, while observing that nationalist sentiment was rising and that India could not rely on the United States due to its unpredictable approach to trade wars and tariffs. Meanwhile, significant parts of the Indian press emphasized that the Doklam standoff did not stop the first informal summit in Wuhan on 27 and 28 April 2018 from helping to get relations back on track. Furthermore, that China maintained a neutral stance in relation to Modi’s revoking of Article 370 meant that China was staying true to its principle of non-interference in the internal affairs of other countries. (India Today) The Press Trust of India was quick to highlight Chinese vice foreign minister Luo Zhaohui words: “Now the solid ground has been laid. With the joint efforts of the two sides President Xi’s visit to India will be a full success and set the tone and direction for further growth of bilateral ties and lead to new progress and fruitful results in exchange of cooperation between the two sides. . . . Since it is an informal meeting, the two leaders will have a relaxed and comfortable atmosphere to have free exchange of views without fixed topics.” (India Today)

Ladakh remains a consistent spot of potential tension between the two regional powers, with India intentionally allowing intensifying Tibetan cultural influences in Ladakh. Local Ladakhi monks have found themselves by Tibetan lamas. Analyst Phunchok Stobdan, author of the forthcoming book The Great Game in the Buddhist Himalayas, noted that India has overplayed its hand by expecting to capitalize on Tibetan concerns as a bargaining chip. (Financial Times) Nevertheless, Wang Huiyao, founder and president of the think-tank Center for China and Globalization, struck a hopeful note in The Indian Express, noting that overriding causes for friendship and cooperation were far more significant than even the present difficulties. Apart from mutual connectivity and tourism, a top-priority common cause can also be seen in Ladakh: the need to collaborate on environmental protection and climate change mitigation. “The destinies of China and India are inextricably linked through a shared atmosphere, water resources, and the Himalayan ecology. Both countries face ecological crises. But together, they can provide new impetus for environmental governance, promoting solutions that balance sustainability and development.” (The Indian Express)