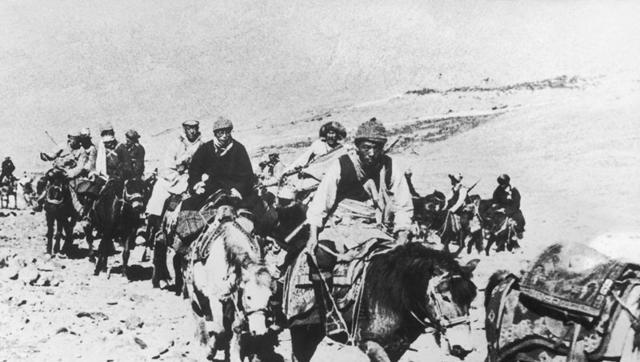 A discernible shift in Beijing’s policy towards the Dalai Lama was seen at the 4th plenary session of the 12th National People’s Congress (NPC), China’s version of a parliament, which concluded on March 15, 2016. China utilised the Chinese People’s Consultative Conference (CPPCC) and NPC sessions – popularly called the ‘Big Two’ — to drive a wedge between the Dalai Lama and the various Tibetan Buddhist sects in a bid to undermine and isolate him.

An indication of the shift in the Chinese government’s stance towards the Dalai Lama was the remark by Padma Choling, deputy party secretary in the Tibet Autonomous Region. He told journalists during the NPC session that the Dalai Lama “was no longer a religious leader after he defected his country and betrayed its people. If the Dalai Lama wants to return to China, he must give up ‘Tibet independence,’ and must publicly acknowledge Tibet and Taiwan are inseparable parts of China and that the People’s Republic of China is the only legitimate government.” Choling’s remarks are significant as they show, in the words of an analyst, that “the legitimacy of the Dalai Lama’s status as a religious leader was no longer acknowledged by the central government as he has failed to fulfil his obligation to inherit and spread Buddhism and continued his separatist activities”.

The policy shift follows the declaration by the Politburo Standing Committee after a week-long closed-door conclave in 2015 that Beijing has the final say in recognition of the Dalai Lama. The official news agency, Xinhua, asserted that “all confirmations of the Dalai Lama have required approval by the central Chinese government, which has deemed the process an important issue concerning sovereignty and national security.” An anonymous source cited by AsiaNews quoted Xi Jinping as saying at the meeting that the Chinese Communist Party would pick “the next Dalai Lama, period! If things do not go well, we are ready to take corrective action.”

In recent deliberations there was a deliberate effort to to single out the Dalai Lama for criticism. For instance, three Chinese singers and actors had visited Bodh Gaya last month to commemorate the 92nd birth anniversary of the late predecessor of the 17th Gyalwang Karmapa. But the Deputy Party Secretary of TAR, Wu Yingjie, chose to raise the issue during the NPC session. Speaking to reporters, he criticised renowned Chinese singer Faye Wong, actor Tony Leung Chiu-wai and actor Hu Jun for attending the event. He said, “We hope the celebrities take the responsibility for their own deeds. We firmly oppose all celebrities, however influential they are, and whatever purpose they have, to make any contact with the 14th Dalai clique, or even help him spread his ideas.” Notably while the Dalai Lama and his “clique” were singled out for criticism and visitors warned to avoid contact with them, any critical reference to the Gyalwa Karmapa, who heads the Karma Kargyu sect of Tibetan Buddhism, was carefully avoided. Beijing is trying to undermine the Dalai Lama and draw a distinction between him and other Tibetan Buddhist religious leaders.

Jayadeva Ranade is president, Centre for China Analysis and Strategy.

The views expressed are personal