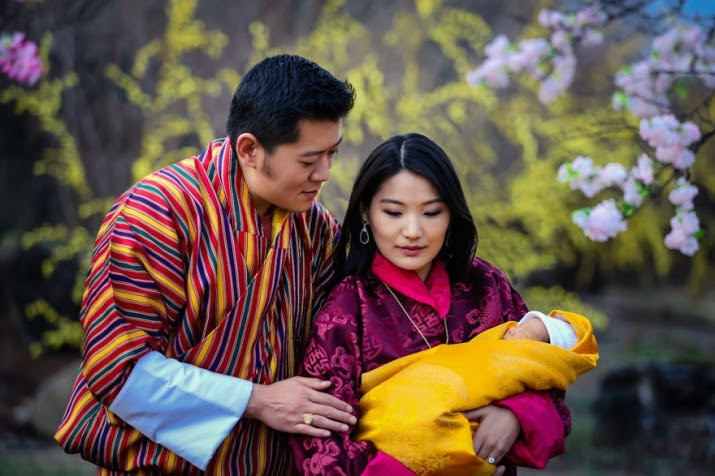 The Buddhist kingdom of Bhutan planted a total of 108,000 trees earlier this month to commemorate the birth of the first child of the widely revered King Jigme Khesar Namgyel Wangchuck and Queen Jetsun Pema.

The name of the crown prince, who was born on 5 February, is due to be announced on 16 April to coincide with the anniversary of the death of Tibetan lama Zhabdrung Ngawang Namgyal Rinpoche (1594–1651), who unified Bhutan as a nation state in the 1630s.

“Each sapling encapsulates a prayer and a wish from the person who planted it to His Royal Highness the Prince so that just like the bountiful tree, the Prince also grows up healthy, strong, wise, and compassionate,” said Tenzin Lekphell, whose organization, Tendrel, coordinated the initiative, which took place a month after the royal birth. (The Diplomat)

Prime Minister Tshering Tobgay, three of his ministers, and the leader of opposition were reported to be among the 100,000 people who came out to plant saplings in districts across the nation on 6 March.

Trees are highly valued in Bhutan, where the government is very conscious of environmental protection and sustainability. The constitution includes a provision requiring the country to maintain at least 60 per cent of its area under forest cover. In 2015, the tiny Himalayan kingdom with an estimated population of just 780,000 broke a world record previously held by India by planting more than 49,000 trees in an hour.

“In Buddhism, a tree is the provider and nourisher of all life forms, symbolizing longevity, health, beauty, and even compassion,” Lekphell said, noting that Shakyamuni Buddha attained enlightenment under a tree. (The Diplomat)

The saplings included dogwood, oak, pine, and teak, depending on the altitude at which they were planted, Lekhpell noted, explaining that the number 108 denoted “the cleansing of 108 defilements that impede beings from attaining enlightenment.” (The Diplomat)

The kingdom’s high level of forest cover means that not only has Bhutan met its pledge to remain carbon neutral, but it is one of the Earth’s rare but essential carbon sinks, with its forests absorbing more carbon dioxide than the country produces. It has also banned logging for export and seeks to be 100 per cent organic and have zero net greenhouse gas emissions by 2020. 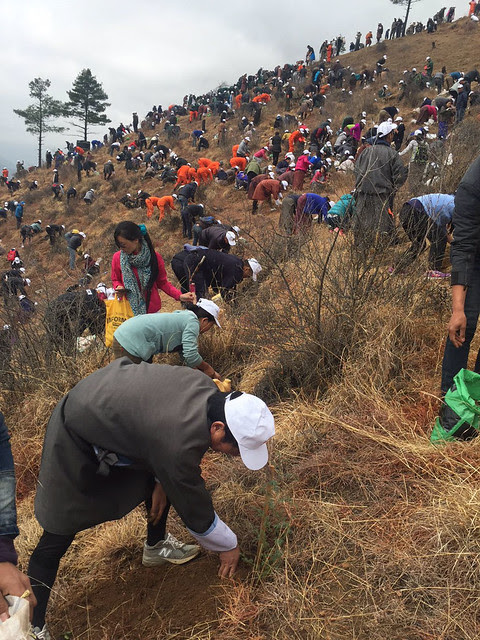 Tens of thousands of Bhutanese celebrated the birth of the crown prince by
planting saplings. From boredpanda.com

Since the planting, citizens across the country have been keen to ensure the health of the young trees, with many people making stops or detours during their day to water the saplings planted on hillsides and in valleys. “We are now nurturing the plants as if we are nurturing the little prince,” said business operator Dasho Karma Raydi, who had driven to a small hill near a Buddha statue on the outskirts of the capital Thimphu to water the pine he planted. (Associated Press)

“We are committed to take care of the plants because so much emotion is attached to this unique way of celebrating the new arrival [of the crown prince],” Raydi said, adding that he had noticed dozens of other people doing the same. (Associated Press)

Almost 75 per cent of Bhutan’s population identify as Buddhists, according to data for 2010 from the Washington, DC-based Pew Research Center, with Hinduism accounting for the majority of the remainder. Most of Bhutan’s Buddhists follow either the Drukpa Kagyu or the Nyingma school of Vajrayana Buddhism.Bhutan king moving forward regarding plantation its really good effort to see his kingdom clean and green.