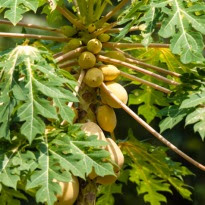 Can papaya plant leaves cure dengue? There is no scientific answer to this question, but the use of papaya leaves has grown phenomenally in the capital in the past few weeks as the mosquito-borne disease sees a spurt, claiming at least five lives in the national capital. Over 900 cases have been reported here so far.

The leaves, which are said to increase dipping platelet counts, are a much sought after product these days in Delhi nurseries – so much so that many residents told IANS that papaya leaves have been disappearing from their localities.

Vikram Saini, director of the Masjid Nursery at Pandara Road in south Delhi, said there are many people who come to buy the papaya plant.

“We are getting a lot of queries. We have ample stocks,” Saini said.

Y.C. Singh of Greenways Nursery at Lado Sarai said that at least 20-25 people come in a week to buy papaya plants.

“The number of people coming to buy the plant is increasing. We sell a papaya seedling for Rs. 20, and the plant for Rs. 25,” he said.

Doctors, however, said there are no scientific studies to prove that papaya plant leaves can cure dengue or increase the blood platelet count.

“I have witnessed this phenomenon for the last 10 years. A lot of patients tell me that they have benefited but this is yet to be proved scientifically,” Suronjit Chattejee of Indraprashtha Apollo Hospitals told IANS.

According to S. P. Byotra of Sir Ganga Ram Hospital, 95 percent of dengue patients recover on their own as it is a self-limiting disease. “It is only in five percent cases when patients suffer from hemorrhagic dengue fever or dengue shock syndrome that they have to be treated for a dipping platelet count,” he added.

Patients, however, say they have found immense benefit from papaya leaves.

“When my son was diagnosed with dengue last month, neighbours advised me to give him papaya leaves to increase the platelet count. It was miraculous,” said Anuradha Gupta, a software professional and mother of two young boys.

Krishna Satpathy, who herself recovered from a bout of dengue fever, said papaya plant leaves are much in demand.

“It proved beneficial for me. But when my maid also got dengue, I tried to get the leaves for her. But I couldn’t find it in my neighbourhood. I had to approach my gardener, who went to a nursery in west Delhi to get it,” said Satpathy, who lives in the Vasant Kunj area in south Delhi.

Satpathy said the leaves are to be first boiled and then crushed to extract the juice, which is subsequently drunk.

Preeti Chabra, senior consultant (Ayurveda) at Sir Ganga Rama Hospital, said: “Yes, I have come across many people who are taking the juice of these leaves.”

“This looks like a new phenomenon. A lot of patients have told me that they are taking it. I am not stopping them. But it’s not mentioned in the classical Ayurvedic text,” Chabra told IANS.

Dengue symptoms include fever, headache, muscle and joint pain – and a skin rash that is similar to measles. In a small proportion of cases, the disease develops into the life-threatening dengue hemorrhagic fever, resulting in bleeding, low levels of blood platelets and blood plasma leakage, or dengue shock syndrome, characterised by dangerously low blood pressure.