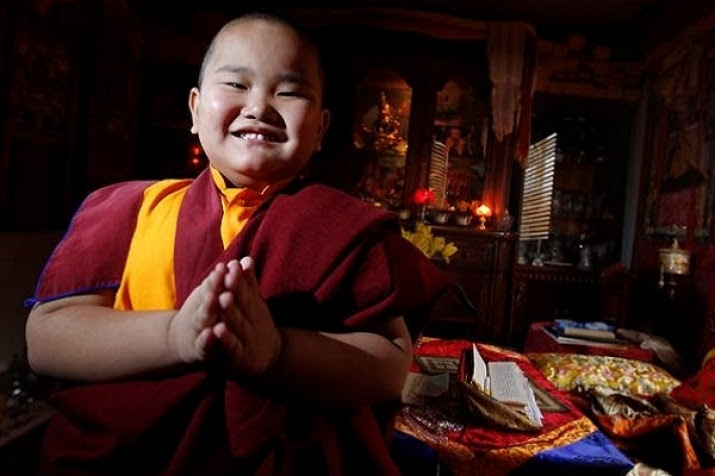 Jalue Dorjee. From worldreligionnews.comJalue Dorjee (born 2006-2007) is known as Minnesota’s “Little Lama”, who in Tibetan Buddhism is regarded as the reincarnation of the late lama Taksham Neuden Dorjee. It is extremely rare for a lama to be discovered in the West. When Jalue’s mother was pregnant, a lama who was visiting the Twin Cities had a dream about her child and this led to a divination ritual to determine his identity.

Jalue currently attends third grade at Highland Elementary School in Columbia Heights. Jalue has said that his classmates “treat me like I’m just a normal kid,” and that they have heard he is a lama but don’t always know what that means.

Nine-year-old Jalue Dorjee enjoys sports, watching movies on his laptop, and collecting Pokémon cards. However, this otherwise typical boy from Columbia Heights in Minnesota will not live an average life after he turns 10. Jalue was identified by His Holiness the Dalai Lama as the 8th incarnation of Taksham Nueden Dorjee (a Tibetan lama who lived in the 16th century) at the age of 3 on 6 January 2009. The Dalai Lama also conferred on him a formal lama name, Tenzin Gyurme Trinley Dorjee.

Traditionally, boys recognized as the incarnation of a lama are quickly moved to a monastery in Tibet or India to pursue monastic studies, but because Jalue was born in the US, the Dalai Lama suggested that Jalue continue to live as a normal American child, studying in school until his 10th birthday, after which he will move to monastery in India to dive fully into his religious training.

The story of Jalue was covered by several news outlets, including the Star Tribune newspaper, and The Huffington Post and World Religion News news websites. According to the reports, Jalue was recognized even before his birth, when a highly respected Indian lama visited the Tibetan community in Minnesota’s Twin Cities. Jalue’s mother Dechen Wangmo and father Dorjee Tsegyal shared with the lama their magical dreams involving tigers and elephants. “One night, an elephant appeared with several little ones around it. They merged into the small prayer room in the family home. Once inside, they vanished,” Wangmo had said. (World Religion News) 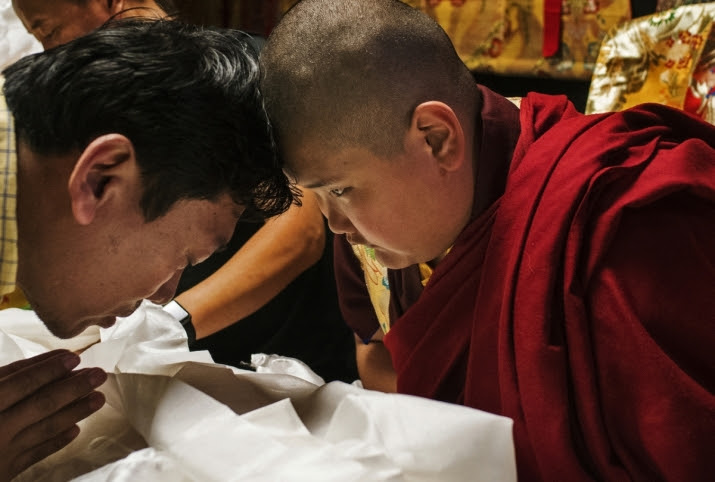 Jalue Dorjee greets devotees at a ceremony. From startribune.com

Soon after the parents told the lama about the dream, the latter had also his own vision in which he saw huge tigers roaming through the family’s home. According to the Star Tribune, the tiger is a sign of strength and protection in Tibetan Buddhism. The lama held a divination that persuaded him that the child was the incarnation of a Buddhist spiritual master. After Jalue was born, many prominent lamas in India weighed in on the question of the incarnation. The 7th incarnation of Taksham Lama, Taksham Karma Yongdu Chökyi Nyima, had died in Switzerland a year before Jalue was born, and Tibetan Buddhist leaders were searching the world for his reincarnation. Although it is unusual to discover a lama in the West, the little boy from Minnesota was their first choice.

Along with spiritual practice, such as learning Tibetan Buddhist mantras, practicing religious calligraphy, and attending ceremonies, Jalue Dorjee is also reported to be extremely motivated to learn science, a promising interest as the intersection between Buddhism and science grows more intertwined. “My science teacher told us we’re going to be learning about magnets and wires and batteries,” he told the Religion & Ethics Newsweekly website.

“No, I’m not tired. I want to continue,” he said keenly to his teacher Thinly Worser, when the latter asked him to take a rest when he was tired during tutoring.

Jalue’s father says he realizes that he is raising a lama for the 21st century. A tech-savvy spiritual leader who can easily communicate with people in the West and East. Yet someone also fully versed in the wisdom and practices of Tibetan Buddhism and able to teach those concepts to others.