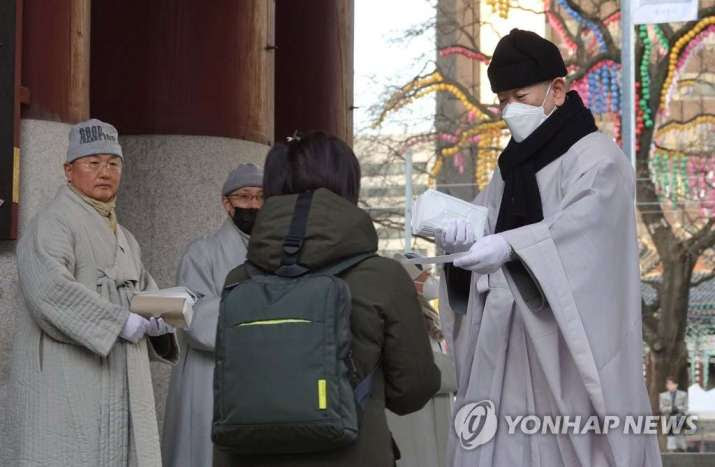 From yna.co.kr
The Jogye Order, officially the Jogye Order of Korean Buddhism  is the representative order of traditional Korean Buddhism with roots that date back 1200 years to the Later Silla National Master Doui, who brought Seon (known as Zen in the West) and the practice taught by the Sixth Patriarch, Huineng, from China about 820 CE.   The name of the Order, Jogye, was adopted from the name of the village where Patriarch Huineng’s home temple, Nanhua Temple, is located,

As South Korea experiences a rapid rise in cases of COVID-19—the official name for the coronavirus outbreak that emerging from China late last year—Buddhist organizations are finding ways to respond skillfully to the threat to the nation’s health and economy. Buddhist temples rescheduling and reducing services and public events in the face of the risk of further spreading the virus. Those that are continuing their schedule programs are offering hand sanitizers and face masks to attendees.

The number of confirmed cases of COVID-19 in South Korea jumped this week to 156 after an infected woman attended a Shincheonji Church of Jesus service in the southeastern city of Daegu, resulting in the infection of dozens of fellow worshippers. Daegu is the country’s fourth-largest city and home to some 2.4 million people. Korea also reported its first death from the virus, a 63-year-old man who died of pneumonia on 19 February in the southeastern city of Cheongdo.

Officials responded on Friday by designating both Daegu and Cheongdo as “special care zones.” Prime Minister Chung Sye-kyung vowed that the government would take “strong and swift” action, emphasizing: “The government will take special measures by declaring the Daegu and Cheongdo areas as special care zones as a sudden rise in confirmed cases was reported there.” (Yonhap News Agency) A bus in South Korea is disinfected. From theguardian.com

In Seoul, public rallies are temporarily banned and all church services connected to the Shincheonji Church of Jesus will be closed. The capital is also closing down more than 3,000 social welfare facilities as a measure to prevent the spread of the virus.

The Jogye Order of Korean Buddhism, the country’s largest Buddhist order, has its main temple in Insadong, a popular tourist neighborhood in the heart of Seoul. “We have seen the number of visitors to the temple fall over the past few weeks,” an official from the temple said this week. “We had to cancel three rounds of events for tourists as people have called off trips to the country. We are still running our temple-stay programs but are taking strict measures, such as checking people’s previous destinations and making sure they don’t show symptoms.” The official added that guests taking part in the temple-stay program would be given face masks. (Yonhap News Agency) A woman in a mask visits the Jogye temple in Seoul. From voanews.com

The Jogye Order has ordered temples across the country to cancel large group events, while allowing individual temples to determine specific responses to the virus.

“We also sent out hygiene rules that should be followed at all temples in Korea,” said Jogye Order official Ven. Lim Yoong-chang. “Also, local headquarters near Daegu like Tongdosa Temple in Yangsan, South Gyeongsang Province, and Beomeosa Temple in Busan are expected to come up with their own policies on responding to the virus outbreak.” (The Korea Herald) Earlier this month, the Jogye Order offered a donation of  ₩100 million Won (US$82,697) to China’s ambassador to South Korea to help with humanitarian relief related to the coronavirus. Ven. Wonhaeng, president of the Jogye Order, said at the time: “China is the country who introduced Buddhism to Koreans. We have been the closest of all neighbors, and therefore the wish to help as much as I can naturally arises in me. I am ardently praying that this outbreak of coronavirus will come to pass as soon as possible.”

In reply, Ambassador Xing Haiming said: “On behalf of the Chinese government, I gratefully and eagerly accept the helping hands of the Korean Buddhist community, especially those of the Jogye Order. It is a deeply touching moment.” (Jogye Order of Korean Buddhism)

The Jogye Order is a school of Seon (Zen) Buddhism that traces its history to the Unified Silla (also known as the Later Silla) kingdom (668–935). It emerged as a distinct school in the late 11th century  in the Goryeo period under the leadership of Bojo Jinul (1158–1210), who worked to unify the disparate schools of Korean Buddhism at the time. Today the school claims 20,000 monks and 20 million lay followers around the world. It is the largest order in South Korea, which is also home to several other schools of Buddhism, including the Taego Order (Seon), Cheontae (Tiantai), Jingak (esoteric Buddhism), and Won, a Buddhist order founded in the early 20th century.

To date, 76,717 cases of COVID-19 have been confirmed worldwide, with 2,247 deaths and 18,438 recoveries. The vast majority of the cases have been in China, mostly in the central province of Hubei and the city of Wuhan, where it is believed to have originated in December 2019. With the recent increase in confirmed cases this week, South Korea has come to have the third-largest number of confirmed cases at 156, with Japan having more than 700—most originating from the Diamond Princess cruise ship. Hong Kong and Singapore have each reported fewer than 100 total cases.

The World Health Organization (WHO) on February 11 announced an official designation for the disease caused by the novel coronavirus (2019-nCoV), naming the condition COVID-19.

WHO previously had used the term “novel coronavirus pneumonia” to refer to the disease caused by 2019-nCoV infection.