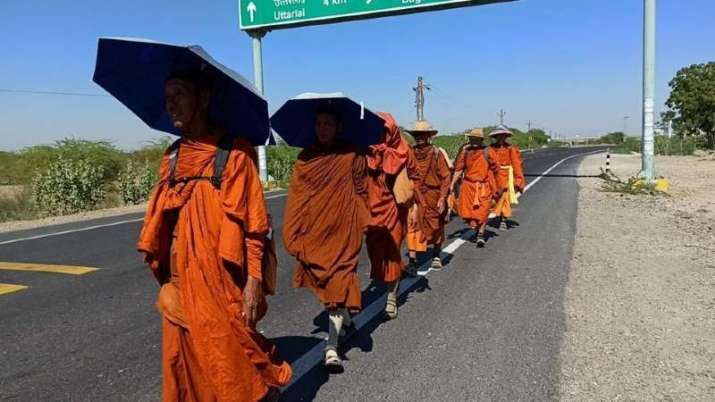 From hindustantimes.com
Whether it’s peace of mind or peace on earth you’re after, it all begins with making an effort to be more calm and present.

Thirteen Buddhist monks who have embarked on a peace march from Thailand to France were stopped Monday for failing to show documents required to be in a restricted area of India, according to a police report. The monks, who had already traveled across the whole of India, hold valid visas for both India and Pakistan, but did not have specific permission to travel through the protected area they had entered, according to Indian officials.

“The 13 Thai monks are on a peace journey and have valid single-entry visas [for] India and Pakistan. But the route of their travel has not been specifically mentioned in their documents. . . .” said Vijay Singh Charan, head of the police sub-division in the city of Barmer. (Hindustan Times)

The Times of India newspaper clarified that the group of Buddhist pilgrims consists of 12 Thai citizens and one Canadian. Under India’s Foreigners Order of 1958, the entry of foreign nationals is restricted for certain areas in Barmer District, in the western portion of the state of Rajasthan near the India-Pakistan border. Foreigners must obtain permission from the district administration to enter these areas, according to the act. Specifically, the act states that:

Certain areas near the international border in the State of Rajasthan have been declared as Protected Areas. As such, no foreigner can enter or stay in the protected areas of the State without obtaining a permit from the competent authority. These protected areas generally fall in the belt of 40 km. inside the State of Rajasthan from its international border i.e., Western side of National Highway No.15 running from Sriganganagar to Sanchore via Sriganganagar, Suratgarh, Lurkaransar, Bikaner, Gajner, Kolayat, Phalodi, Khera, Ram Devra, Pokaran, Lathi, Jaisalmer, Sangad, Fatehgarh, Sheo, Bhadewa, Kapoordi, Barmer, Hathitala, Sanwara, Lookhoo, Gandhwa, Dhamuna subject to the following exceptions. . . . (Government of India: Ministry of Home Affairs)

Exceptions include city limits as well as areas of particular tourism interest, but the monastics, traveling by foot, would have passed beyond these areas in their journey. The monks were near the city of Barmer, and were brought there by police and placed in a hotel. Police informed the monks of the rules and notified the higher authorities of the situation. According to the Deccan Herald newspaper, a police official confirmed that the delegation would be taken to the Attari-Wagah border crossing to the north in the neighboring state of Punjab to enter Pakistan.

Phra Sutham Nateetong, 60, the leader of the monastic delegation, said that the group is carrying a message of global peace on their approximately 9,000-kilometer trek from Thailand to France. A year ago, Phra Nateetong completed a similar journey on his own, covering more than 5,000 kilometers from Santa Monica, California, to New York City over 121 days.

Following his 2019 journey, Phra Nateetong noted that: “America gives you a picture of the world. I saw all kinds of people and faced all kinds of weather conditions during the walk.” He continued: “Native Americans were very supportive of me. They appreciated my presence and gave me blessings whenever we met.” (Bangkok Post)

The group of 13 monks have so far walked around 4,000 kilometers—just under half of their intended journey.

Peace cannot be kept by force. It can only be achieved by understanding.” —Albert Einstein