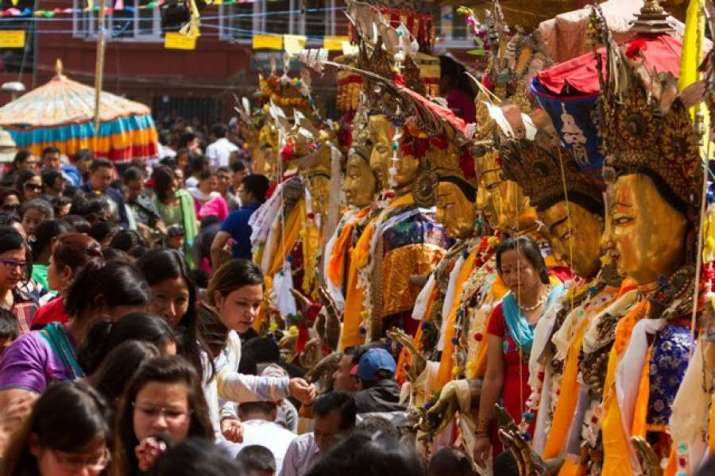 Devotees offer alms to the keepers of Buddhist deities. From kathmandupost.com

Samyak Mahadan, a thousand-year-old Buddhist alms-giving festival was celebrated from 26–27 February on a large open ground in the historic Nepalese city of Patan (now Lalitpur Metropolitan City) in the south-central part of Kathmandu Valley. The main focus of the festival is to honour the buddhas, particularly Dipankara Buddha, who, in a previous life, predicted the enlightenment of Shakyamuni Buddha.

According to some Buddhist traditions, Dīpankara (also Dīpamkara) was a Buddha who reached enlightenment eons prior to Gautama, the historical Buddha.

Generally, Buddhists believe that there has been a succession of many Buddhas in the distant past and that many more will appear in the future; Dīpankara, then, would be one of numerous previous Buddhas, while Gautama was the most recent, and Maitreya will be the next Buddha in the future.

According to The Kathmandu Post newspaper, Samyak Mahadan was first celebrated in Kathmandu in 1015 CE (135 in the Nepalese lunar calendar) and is observed once every 12 years in Kathmandu, every five years in Patan, and every year in Bhaktapur, a city in east corner of Kathmandu Valley. This year, the celebrations in Patan marked its 472nd anniversary, with more than a million people reportedly taking part.

The festival brings together a wide cross-section of the Newar community, including lamas, musicians, artists, and farmers. During the celebrations, the city reverberates with the chants of lamas and Buddhist religious performances. The event showcases a variety of Newer Buddhist elements, with hundreds of images of Dipankar Buddha, and other buddhas and bodhisattvas, including Avalokitesvara and Arya Tara, and gifts of different types of food for the deities of the Buddhist cosmos.

“The festival is quite important for Buddhist Newars, as it has become a way of practising daan (an act of giving and sharing) dharma. A festival that also has, over the years, nurtured our faith,” said local resident Sabita Dhakwa. “We were lucky as we took an inside route, so we didn’t have to wait in the line for long. But many people had already arrived before us, fearing that the queue would have them standing for hours.” (The Kathmandu Post) The Samyak Mahadan festival in Patan is organised by Hiranya Varna Mahavihar, informally known as the Golden Temple, with funding from the Ittilihane Samyak Mahadan Ayojak Samittee, a unit of the Mahavihar. They form an organising team with a diverse network of people, from Chitrakars to Rajkarnikars, for the celebration.

“The Rajkarnikars make matha rotis for the festival, and the Chitrakars are given works related to decoration and paintings of deities,” said Hira Ratna Shakya, a resident of Nagbahal, in the city of Lalitpur. (The Kathmandu Post)

“It takes around two to three million [rupees; US$26,000] to organise the festival for the organising team,” said Pushpa Raj Bajracharya, one of the festival oranizers, who also served as a priest in the Mahavihar for a month this year. (The Kathmandu Post)

Bajrachariya explained the preparations for Samyak Mahadan: “Every month the Vihar appoints two priests. One a young boy who should have just finished his chudakarma ceremony, a coming-of-age festival, and the other an adult who becomes the assistant priest for the boy, bafacha.” (The Kathmandu Post)

Bajrachariya further said that 12 assistant priests together coroodinated various groups of participants, and organised a sangha bhoja (feast) in Nagbahal at the end of the lunar calendar. Two days before the festival, elders from the vihara walk through Patan inviting communities to participate. From kathmandupost.com

According to The Kathmandu Post, Samyak Mahadan used to be celebrated annually until 1805, when, due to a lack of resources, social group Samyak Guthis began organizing the festival once every five years.

Bikash Ratna Dhakwa, a co-organiser of the festival, recounted the story behind the origins of Samyak Mahadan: “It is believed that during the time of king Bhaskar Dev, a Thakuri ruler, one of his sons, Bharibharo, was a poor king. He was poor because he was generous to his people. But to hide the fact that he was poor from his people and his wife, he used to fill his storehouse with cow dung and lock it, telling people he had treasures inside. Then, one day, because of his faith and kindness, the dung turned into gold. Amazed with the incident, Bharibharo organised the Samyak festival to share his wealth with the people. It is believed that we have been celebrating the festival since then.” (The Kathmandu Post)