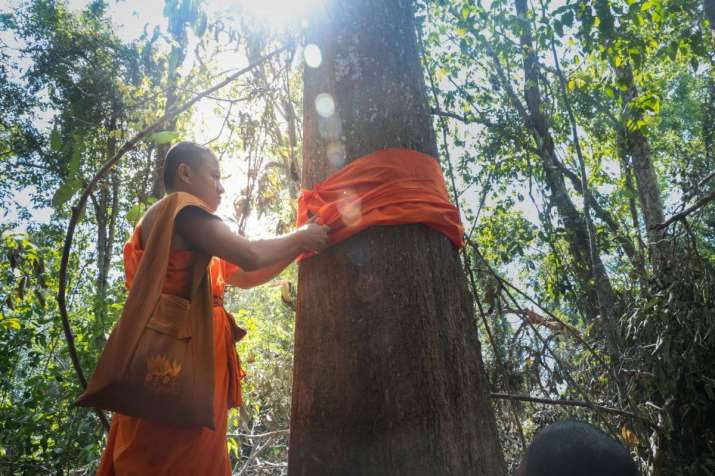 Healthy forests are necessary to all aspects of modern life. They store carbon, help protect communities and infrastructure from the impacts of drought and flash-floods, supply clean water and food, livelihoods, materials used in construction, trade, and provide a whole host of other ecological services.

The forests of the Greater Mekong – a region encompassing Myanmar, Thailand, Cambodia, Lao PDR, Vietnam and Yunnan and Guangxi in Southern China – are some of the most biologically diverse places on Earth. They also contain the largest combined tiger habitat in the world—540,000 km2 or roughly the size of France. But over the last 10 years or so, numbers of this amazing feline have crashed by 70% in this part of the world.

In recent years we have seen the continuous, unrelenting abuse of the world’s resources. Forests and trees, which are critical to ecosystems and planetary biodiversity, are under acute stress. According to the Buddhist tradition, the Buddha was born from Maya’s side under a tree. He achieved enlightenment under the Bodhi tree, and delivered his first sermon and entered parinirvana under the shelter of trees. For religious and scientific reasons, the health of forest ecosystems is critical to the Buddhist idea of collective, planetary well-being.

Deforestation is a major threat in many majority Buddhist countries, including Thailand and Cambodia. Decades of illegal logging has had an adverse effect on local economies, food security, and biodiversity. However, a group of Buddhist monks and activists in Thailand and Cambodia are working together to protect threatened forests, integrating Buddhist principles with environmental awareness, providing consultation to government officials about environmental issues, and implementing sustainability projects. They are also involved in tree ordination, which over the past few years has gained media attention around the world for its innovative and inspiring message about the sanctity of the natural world.

In their campaigns, the eco-monks highlight how the selfish and short-sighted desire for economic gain and accelerated development have led to the exploitation of resources. They see it as their duty to bring traditional religious concepts and rituals to bear on contemporary ecological needs.

For years, the monks have made a substantial difference by cooperating with local NGOs to formulate sustainable development plans, developing education programs to encourage alternative farming methods that place a lighter burden on the land, and providing farmers with the knowledge, tools, and financial support to improve villagers’ economic circumstances.

Prominent eco-monk Phrakhu Sangkom Thanapanyo Khunsuri has established a traditional farming school at his temple in the eastern Thai province of Chonburi: the Maab-Euang Meditation Center for Sufficiency Economy. With many full-time students, Phra Sangkom teaches the Buddhist concepts of personal reflection and a theory called the Sufficiency Economy, which was developed by the late Thai monarch Bhumibol Adulyadej to promote subsistence farming, encourage self-sufficiency, and teach detachment from materialism and consumerism.

In Bangkok, another eco-monk, Phrakhu Win Mektripop, who holds a master’s degree in environmental economics from Thailand’s Chulalongkorn University, has taught for years on the interrelationship between Buddhism and environmentalism. Many Thai universities and NGOs have followed in the stead of these monks by promoting environmental values founded on the Buddhist teaching to farmers and residents. The Bangkok-based International Network of Engaged Buddhists (INEB) is one such organization working to connect Buddhist and non-Buddhist social and environmental activists across Asia and the world.

Thai monks are also teaching their Cambodian counterparts to protect forests. For example, Cambodian monk Ven. Bun Saluth, head of Samrong Pagoda in Oddar Meanchey Province, is a pioneer in protecting forests in Cambodia. Ven. Bun Saluth grew up in a rural village, the son of a farmer, but left home at an early age to become a monk. He spent five years studying in Thailand, where he lived with a group of eco-monks, returning home in February 2002 with a vision to protect his country’s forests. He has since succeeded in preserving 18,261 hectares of forest land in Oddar Meanchey. For his work, Ven. Bun Saluth was awarded the Equator Prize by the United Nations Development Programme in 2010.

According to a World Bank report, 73 per cent of Cambodia was covered by forest in 1990, but by 2010 that had fallen to 57 per cent. The monks fighting to preserve Cambodia’s forests have worked mainly through two large groups: the Monks Community Forest (MCF) and the Independent Monk Network for Social Justice (IMNSJ). Both groups are battling to save forests by demanding stronger government action against deforestation and lobbying lawmakers for greater protection of trees.

The IMNSJ has more than 5,000 monastic followers who teach local people how to use social media to raise awareness about illegal logging by uploading photos and videos and publishing articles. The monks also teach local residents what they can do to prevent deforestation. IMNSJ founder and leader Vene. Buntenh is a passionate advocate of preventing deforestation. Among his concerns are the threats against Prey Lang, one of Cambodia’s largest and oldest evergreen woodlands, comprised of 3,600 square kilometres of forest, including giant luxury timber trees, and home to at least 20 endangered plant species and 27 endangered animal species. Large sections of Prey Lang have already disappeared to make space for plantations, and illegal loggers have removed large patches of trees in protected areas.

The environmental and conservation activities of monks in Thailand and Cambodia also extend to performing tree ordination ceremonies. Tree ordination, adopted from traditional Buddhist practices, is popular in many Buddhist-majority countries. Trees are given “monastic ordination” and wrapped in the iconic saffron cloth worn by Theravada monks, thereby making them sacred and protecting the trees from damage, destruction, and deforestation.

Although the practice of tree ordination did not exist in the Buddha’s time, it is clear that the dedicated teams of monks aspire to create a “pure land” in the human realm. This engaged aspiration has led to the organic development of tree ordination tradition. A monastic robe wrapped around a tree symbolizes the aspiration to not only reduce deforestation, but also to establish a wildlife reserve in the area.

However, monks and activists in Thailand and Cambodia have also come under fire for their activities. Ven. Buntenh was charged with fraud alongside two other civic leaders in January 2018, prompting him to live in exile in the US. In the same year, the supreme patriarch of Cambodia’s monastic sangha turned against the activists, saying that monks should not be involved in protests and calling on pagodas to close their doors to those who are.

At a more everyday level, eco-monks continue to receive criticism about their methodology. Some say that the prominence of monks in worldly or political affairs will lead younger generations of monks to put less emphasis on their monastic lives and practice. It has been a tradition for the Thai monastic sangha to remain conservative on social issues, with monks rarely commenting on topics with political implications. Thai conservatives firmly believe that the role of the monastic sangha should be restricted to the spiritual realm. Less ideological and more pragmatic detractors worry about a hostile relationship developing between monks and the government as a result of repeated clashes. The role of Buddhism in Thai communities as a whole has also been challenged, owing to increasing government involvement and scrutiny.

Nevertheless, the eco-monks insist that they simply want to promote awareness of dependent origination as taught by the Buddha. All things exist through complex causes and conditions, which in turn become the causes and conditions for other phenomena. From this perspective, the world is a vast web of interdependence, in which human and environmental well-being are inseparable. Individuals, communities, businesses, and governments therefore must incorporate mindfulness of this reality into their daily work to avoid destructive acts against nature. This is the ultimate objective of the eco-monks: to protect the forests and trees for the well-being of the environment while also eliminating mental defilements and relieving human suffering.

We live in a world full of thorny and complex issues that demand nuance and sensitivity. We should not overlook the power of religion to address social issues, such as environmental problems, war and peace, and so on. The activities of eco-monks remind us of the benefits of engaged buddhism. Each one of us can take part in the fight for eco-values and religious values.

WWF believes that the green economy approach is the choice for a viable future in the Mekong and, recognising the anticipated changes in the region, is both realistic and feasible. Conservation responses need to be both strategic, addressing the need for long-term development, and where necessary tactical, using temporary measures to secure species and ecosystems under imminent threat. Multiple actions will be needed, ranging from initiatives at international, regional and national policy level to many thousands of projects, negotiations and decisions at the level of sites and landscapes.