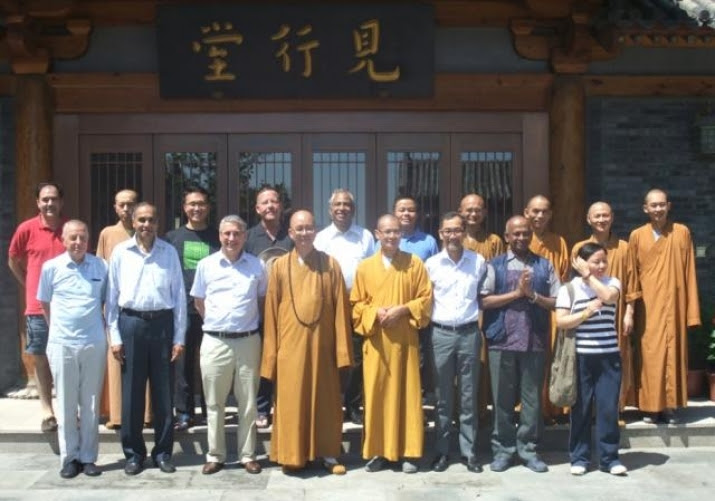 The Jesuit Conference of Asia Pacific (JCAP) hosted a three-day Buddhist-Christian dialogue in Bodh Gaya, India, from 4–6 March, with a focus on ecology and faith and how religions can work together to create a healthy and peaceful world.

Catholic news website UCAnews.com, the workshop, organized under the Interreligious Wisdom Sharing Program, was attended by Jesuit delegates from Indonesia, Japan, Korea, and Thailand, along with more than 100 Buddhist monks and nuns from institutions in Bodh Gaya.

Jesuit Father Cyril Veliyath, coordinator of the Dialogue Commission of the JCAP, observed that the Catholic Church teaches the value of truth that is common to every religion, therefore “we should reach out to other religions and dialogue so that humanity improves.” (UCAnews.com)

“Gone are the days of individual salvation,” Jesuit Father Jose Kalapura concurred. “One can no longer today attain salvation without the community and the entire creation, that is why we need to mend our ways and heal the wounded planet.” (UCAnews.com)

“One needs to go beyond one’s own religion and learn to treat all with respect, which is the only way to reach our destination,” said prominent Jesuit scholar Noel Seth, emphasizing the need for a multi-religious identity. (UCAnews.com) The Buddha and Jesus-book produced by The Jesuit Conference of Asia Pacific. From sjapc.net

Highlighting the forum’s spirit of religious dialogue, Indian Buddhist Jesuit scholar Father Lawrence Eucharist noted, “In an age of religious violence and exploitation of nature, the enlightened believers should come together to appeal to the world about the essence of religions, which is love, compassion and peace and also jointly care for mother earth.” (UCAnews.com)

For Father Bernard Senecal, a French-Canadian Jesuit who teaches a course on Buddhism at Sogang Jesuit University in Seoul, it was his first visit to Bodh Gaya. He acknowledged his good fortune in visiting the important Buddhist site, noting, “What touched me most was the deep personal sharing by some monks as to how Buddhism has changed their lives.” (UCAnews.com)

Father Ingun Joseph, a Korean Jesuit working in Cambodia, shared the sentiments expressed by Father Senecal. “This was the sixth such workshop held in various parts of the world, but the first in India. Dialogue of this kind is very enriching and ennobling,” he said. (UCAnews.com)

Aiming to highlight the organization’s work and to encourage young people to acquaint themselves with Buddhism, the JCAP has also published its first book, The Buddha and Jesus: An anthology of articles by Jesuits engaged in Buddhist Studies and Inter-religious Dialogue. A collection of 16 essays, the book touches upon a wide range of topics, including Buddhist traditions, enculturation, meditation methods in Korean Buddhism, issues in Chinese Buddhism, doctrinal interpretations in early Buddhism, and the spirituality of indigenous peoples.

“It is my earnest hope that [through this publication] many more of our younger people, both Jesuits and non-Jesuits, come to realize the significance and worth of the study of Buddhism, a religion that constitutes the principal faith of the vast majority of the inhabitants of East and Southeast Asia,” said Father Veliath, who edited the book. (Jesuit Asia Pacific Conference)Its really a good effort both the religion coming forward to maintain peace .