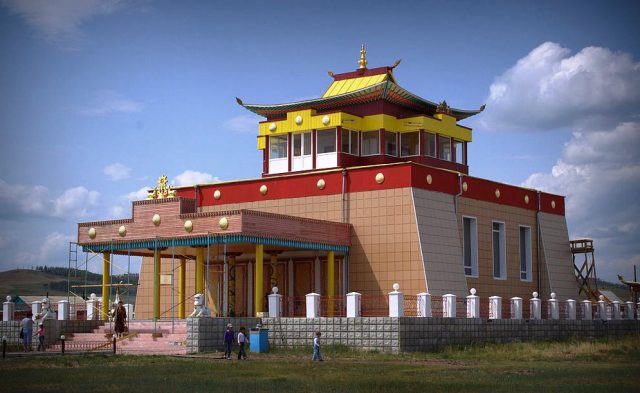 The Sandalwood Buddha is a legendary image believed to be a “living image” or a “lifelike portrait” of Shakyamuni Buddha. The mysterious statue is said to have traveled miraculously from North India to Central Asia, China, and finally ending up in Buryatia. Its story is one that connects Indian, Chinese, Tibetan, Mongolian, and Russian Buddhism, and there is no other statue like it.

There were no images made of the Buddha during his lifetime. Despite the fact that evidence of Buddha images appears only six centuries after his death, legends have circulated across Asia about Buddha images made during his lifetime. The Sandalwood Buddha is related to such a legend, and is considered by Buryatian Buddhists to be the first mythic image of Shakyamuni. According to this legend, when the Buddha went to the Trayatrimsa heaven to teach the Dharma to his mother Maya Devi, the king Udayana ordered his royal artists to create a statue of the Buddha. They made a sandalwood statue that replicated the Buddha’s physique. When Shakyamuni returned to Earth, the statue became animated and moved to make six steps to welcome him. Pleased, the Buddha said that it looked exactly like him and made a prophecy (vyakarana) that wherever it went, Buddhism would flourish.

The prophecy came true in Buryatia, where to this day the statue of the Sandalwood Buddha (Bur: Zandal Zhuu) is preserved. The legendary statue is kept in the heart of the Egituysky Datsan “Damchoy Ravzheling.” ( Tib: Damcho Rabgye Ling, “Place of the Full Development of Holy Dharma”) The Egituysky Datsan is located in Yeravninsky District, around 280 kilometers east of Ulan-Ude, the capital of Buryatia. The datsan (monastery) is affiliated with the Buddhist Traditional Sangha of Russia and one of the most popular monasteries in Buryatia. Its captivating power is strongly related to legends of the Sandalwood Buddha.

Egituysky Datsan, founded in 1820 and officially recognized in 1826, became a major center of Buddhism where the tsam (Tib: cham) mysteries were held. In 1934, there were about 12 temples and 8 buildings in the datsan complex. Among them was Dzogchen Dugan, surrounded by philosophical, medical, and astrological dugans, as well as four datsan, known as: Khurde (Prayer Wheel), Maidari (Maytreya), Ayushi (Amitayus), and Dara-ehe (Tara).

The Sandalwood Buddha is said to have been discovered in China, looted by Russians as as a trophy after the suppression of the Boxer Uprising* in 1901. It was brought to the Egituysky Datsan. There are several stories about how the 2-meter sculpture of Shakyamuni Buddha was transported to the Buryat monastery. One version is that it was brought to Egituysky Datsan thanks to the incredible efforts of its main lama, Gombo Dorzho Erdineev. According to local residents, he traveled to China, which was engulfed in the unrest of the Boxer Rebellion. The statue was bought by the lamas of the datsan and carried to Buryatia by sleigh. Upon arrival, a metal copy was made, placed in the datsan, while the original was hidden. According to another version, the statue was taken out by the Buryat Cossacks from a monastery in Peking that was engulfed in fire after the defeat of the Boxers.

Until 1935, the statue remained in one of the temples of the Egituysky Datsan and was an object of worship and veneration. During the period of the Soviet persecution of religion, the Sandalwood Buddha was transported to Ulan-Ude and kept in the  Museum of the History of Buryatia. The Egituysky Datsan was destroyed in 1937, but revived after 1991.

In the late 1980s, thanks to the efforts of the 21st Pandito Khambo Lama Munko Tsybikov (1908—92), the statue was returned to Buryat devotees. On 25 September 1991, the Sandalwood Buddha was transported by helicopter to the Egituysky Datsan and placed in a special building constructed to maintain a constant microclimate. It became the Palace of the Zandan Zhuu and was consecrated in 2008. By the decision of the Buddhist Traditional Sangha of Russia on 22 April 2003, the statue of Zandan Zhuu was approved as one of Russia’s official Buddhist shrines.

* The Boxer Uprising or the Boxer Rebellion was an anti-foreign and anti-imperialist uprising which was staged in China between 1899 and 1901, towards the end of the Qing dynasty, by the Militia United in Righteousness, known as the Boxers in English because many of its members had practised Chinese martial arts, which at the time were referred to as Chinese Boxing.