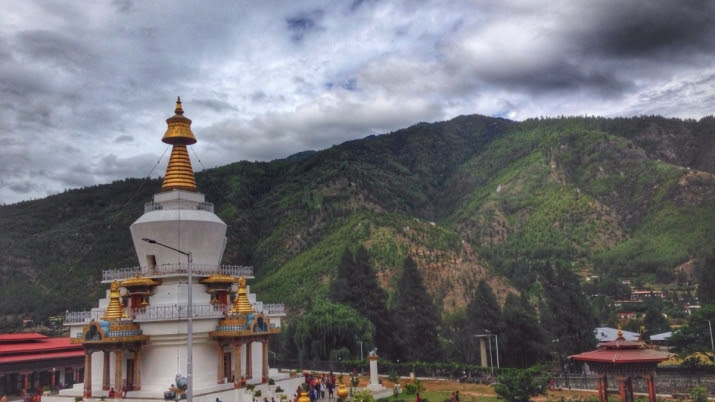 The three-day international conference on Vajrayana Buddhism titled “Tradition and Innovation in Vajrayana Buddhism concluded on sunday. A Mandala of 21st Century Perspectives.” This unique and broad-ranging forum brought together more than 65 speakers from 17 countries, each of whom offered insights and experiences, thoughts and ideas on various aspects of Vajrayana and related disciplines for consideration and discussion among the attendees.

“This conference is not only about sharing ideas, but about discovering something at the core of our being that we all hold in common,” said Dasho Karma Ura, president of event organizer the Centre for Bhutan Studies & GNH Research (CBS & GNHR). “This is the heart of the Vajrayana Buddhist vision, and the conference will help international guests and Bhutanese alike to apply their innate qualities of compassion, wisdom, and creativity in all aspects of their lives.”

Held from 1–3 July in a specially erected “glass tent” in the verdant, forested campus of the Royal Institute for Tourism and Hospitality in the capital Thimphu, the ambitious undertaking played host to more than 300 guests, delegates, and dignitaries from Bhutan and around the world. The conference speakers included lineage holders, spiritual leaders, Buddhist scholars, academics, and scientists, all of whom offered unique perspectives on continuity and change within the contexts of historical and contemporary Vajrayana Buddhism, which has existed in Bhutan as an unbroken spiritual tradition since the 8th century.

Presentations during the course of the three-day forum ranged from perspectives on the historical evolution of Vajrayana Buddhism to art, ceremony, and tantric practices, and to visions and initiatives aimed at preserving the Vajrayana tradition and teachings of engaged compassion and adapting them to the challenges of the 21st century. 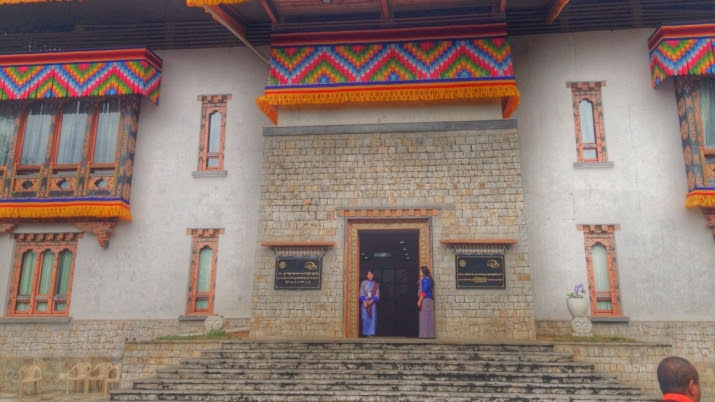 The Royal Institute for Tourism and Hospitality. Photo by the author

At the conference’s opening ceremony, Bhutanese prime minister Tshering Tobgay observed: “This conference is not only about what we Bhutanese can share with all of you who have come from across the world to experience Vajrayana Buddhism in its living context. We ourselves will benefit greatly by learning more about the forms that Vajrayana Buddhism has adopted in Mongolia, India, Nepal, Myanmar, Russia, Australia, Brazil, Japan, China, Europe, and the United States.”

The first day opened with welcoming addresses from senior monastic leaders, including His Holiness the Je Khenpo Trulku Jigme Chhoeda, the supreme head of Bhutan’s Central Monastic Body, His Eminence Khamba Lam Gabju, supreme head of the Centre of Mongolian Buddhism, and Venerable Lama Lobzang, secretary general of the International Buddhist Confederation. The themes for the day, “Historical and Contemporary Perspectives on Vajrayana Buddhism” and “Vajrayana Buddhism and Mind-Body Practices,” brought speakers from Australia, Bhutan, Hong Kong, Italy, India, Taiwan, Thailand, the UK, and the US. Among the speakers, Dr. Geoffrey Samuel, professor at the Department of Indian and Subcontinental Studies at the University of Sydney, gave an overview of Vajrayana’s evolution with respect to its understanding of healing and medical science, the sacredness of the environment, and death and dying. David Verdesi, founder of Human Potential Research and Development, addressed advanced yogic and tantric practices, urging that such teachings be promoted to ensure that they are not lost to future generations. Dr. Omanand Guruji, chief disciple of His Holiness Yugpurush Mahamandaleshwar Swami Shree Paramanand Giriji Maharaj, and yoga instructor Dr. Jean Lim explored the role of Kundalini in awakening Buddha nature.

The second day was structured around the role of women in Vajrayana, notable historical and contemporary figures, and Vajrayana’s tradition of active social engagement. Among the 20 speakers for the day, Canadian nun Venerable Ani Chozom discussed the intensive yogic and meditative practices of the nuns at Gebchak Gonpa in Tibet, and noted the contrast with an increasing emphasis on scholastic pursuits over traditional Vajrayana practices in many contemporary Tibetan monastic communities. Dr. Tashi Zangmo, executive director of the Bhutan Nuns Foundation, emphasized the vital role of women in communicating wisdom and enlightenment, underscoring the progress still to be made in accepting female Rinpoches in the traditionally male-dominated monastic environment. Speakers from Bhutan, China, India, Italy, Nepal, Taiwan, and the UK, meanwhile, discussed various expressions of Buddhism’s role as a powerful force for positive transformation through social engagement. 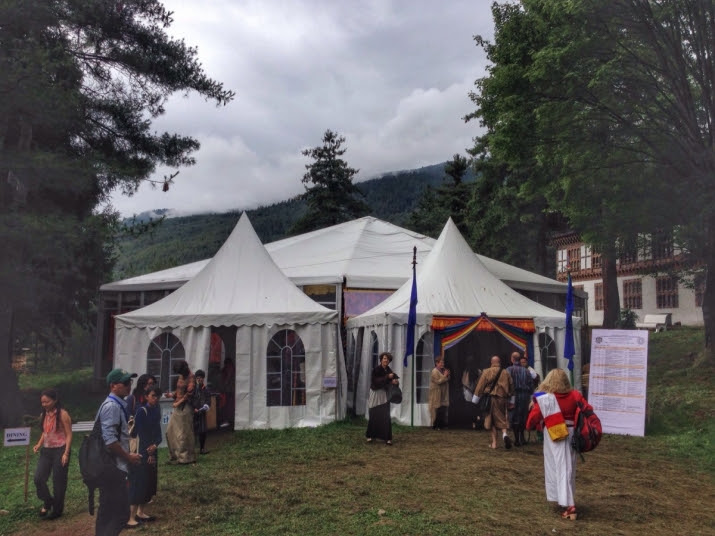 Conference reception. Photo by the author

The third  day of the conference encompassed iconography and the arts, Vajrayana in the 21st century, and thoughts on its global role in helping to create a sustainable future. Presentations and discussions spanned the visual arts—from tantric iconography and the symbolism of mandalas—to ritual performances in the Bhutanese monastic tradition, from empowerments and the Vajrayana oral tradition in the 21st century to the convergence of creativity and conservatism in Buddhism. In the concluding addresses, Dr. Maria Kozhevnikov, associate professor of Psychology at the National University of Singapore, highlighted scientific evidence for the neurocognitive benefits of Vajrayana-specific practices. American author, activist, and lawyer Laurence Brahm gave a stirring presentation on the transformational power of economic and commercial models based on sustainability and integration with local environments. Venerable Khenpo Rinchen Choezang, abbot of Dechen Phodrang Monastic School in Thimphu, related his first-hand experience of the far-reaching impact of monastic education and social engagement.

The event was organized by Bhutan’s Central Monastic Body and the CBS & GNHR, with special assistance from Buddhist scholar Ian Baker, a board member of the International Society for Bhutan Studies (ISBS). The CBS & GNHR is a research institute dedicated to promoting research and scholarship on Bhutan and Gross National Happiness (GNH) through publications, conferences, seminars, and workshops. It is also tasked by the government with conducting and coordinating research and other activities related to GNH. GNH, coined in 1972 by Bhutan’s fourth king, Jigme Singye Wangchuck, describes his developmental philosophy of building an economy based on Buddhist values, prioritizing sustainability and environmental conservation, and preserving the country’s unique culture and traditions, while eschewing a narrow capitalistic focus on material development gauged by gross domestic product.

In 747 C.E., the Indian master Padmasambhava allegedly travelled from Afghanistan to bring Vajrayana Buddhism to Tibet and Bhutan, at the request of the king of Tibet. This was the original transmission that anchors the lineage of the Nyingma school. During the eleventh century and early twelfth century, a second important transmission occurred with the lineages of Atisa, Marpa and Brogmi, giving rise to the other schools of Tibetan Buddhism, namely Kadam, Kagyu, Sakya, and Geluk (the school of the Dalai Lama).