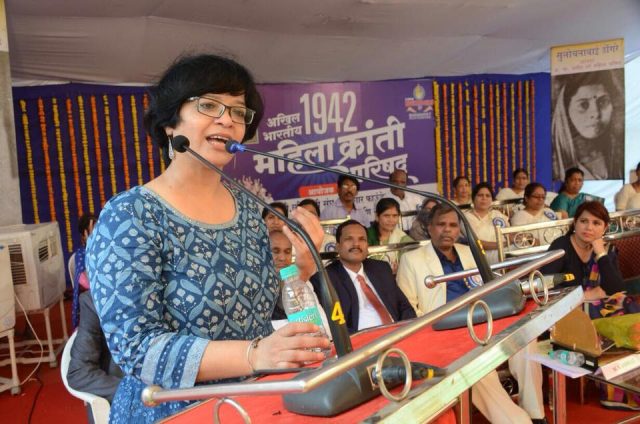 Buddhist and social activist Majula Pradeep. Image courtesy of Manjula PradeepManjula Pradeep  is an Indian human rights activist and a lawyer. She is the former Executive Director of Navsarjan Trust, one of the largest Dalit rights organizations in India, addressing the issues of caste discrimination and gender based discrimination.
Manjula Pradeep was born on October 6, 1969 in Vadodara (formerly known as Baroda) in Gujarat in an orthodox Dalit family, shortly after her family migrated from Uttar Pradesh in 1968.
The BBC has named the socially engaged Buddhist activist Manjula Pradeep, a prominent lawyer and campaigner championing the rights of some of India’s most deprived communities, as one of the world’s 100 most inspiring and influential women of 2021. The list, published annually, highlights the struggles, achievements, and accomplishments of influential and notable women from across the globe.

Manjula Pradeep is a Buddhist convert, a human rights lawyer, and a social activist based in India. She was the first Dalit woman to join the Navsarjan Trust, one of the largest Dalit rights organizations addressing the issues of caste- and gender-based discrimination, becoming its executive director in 2004. She is also a founding member of the National Council of Women Leaders. Raised as a Hindu and a member of one of  India’s “untouchable” Dalit communities in the state of Uttar Pradesh, Pradeep was inspired to embrace Buddhism and to take up the fight for social equality and empowerment for India’s most disenfranchised people as a result of her experiences growing up.*

“This nomination recognizes the leadership of women from the most deprived communities in India and I am one of them,” Pradeep told BDG on Wednesday. “It gives solidarity and support to the cause that I have undertaken with hundreds of marginalized women leaders who are part of the National Council of Women Leaders.”

From bbc.comThe BBC selected the 100 women of note from a pool of candidates who made headlines or influenced important news reports over the past 12 months, as well as those with significant achievements or influence in their societies.

“This year 100 Women is highlighting those who are hitting ‘reset’—women playing their part to reinvent our society, our culture, and our world,” the BBC explained in announcing its selections. “Among them are Malala Yousafzai, the youngest ever Nobel Peace Prize laureate, Samoa’s first female prime minister Fiamē Naomi Mata’afa, Prof. Heidi J. Larson, who heads The Vaccine Confidence Project, and acclaimed author Chimamanda Ngozi Adichie.” (BBC News)

Encompassing the spheres of culture and education, entertainment and sport, politics and activism, and science and health, 50 women from Afghanistan dominate the BBC’s annual list this year. The challenges and achievements of women in Afghanistan came under the spotlight in August as a result of the ignominious and chaotic retreat of Western military coalition forces from Kabul in August.

“Women from Afghanistan make up half of this year’s list, some of whom appear under pseudonyms and without photos for their own safety,” the BBC explained. “The resurgence of the Taliban in August 2021 has changed the lives of millions of Afghans—with girls banned from receiving secondary education, the ministry for women’s affairs being disbanded, and women in many cases told not to return to work. This year’s list recognizes the scope of their bravery and their achievements as they are forced to reset their lives.” (BBC News) From bbc.comAlso among the notable women on the BBC’s list are: Muqadasa Ahmadzai, a social and political activist in Afghanistan who works to protect the rights of women and children, in particular, survivors of domestic violence; Marcelina Bautista, a former domestic worker in Mexico who has founded a support and training centre for domestic workers and campaigns to secure rights, such as fair wages and sick leave, and to protect domestic workers from exploitation; Sevidzem Ernestine Leikeki, a climate activist and founding member of Cameroon Gender and Environment Watch, which focuses on environmental issues and the role of women in natural resource management; Ein Soe May, a pro-democracy activist in Myanmar who recently emerged from months of detention by the ruling junta; Sister Ann Rose Nu Tawng, a Catholic nun who became a symbol of Myanmar’s pro-democracy protest movement after she knelt in front of police to save protesters taking shelter in her church; and Zala Zazai, Afghanistan’s first female deputy chief in the police’s criminal investigation department. Manjula Pradeep. Image courtesy of Manjula PradeepManjula gives half of her time as Director of Campaigns in Dalit Human Rights Defenders Network Project, which covers five states of India. Manjula has founded Wise Act of Youth Visioning and Engagement (WAYVE) Foundation www.wayve.net.in which works for the empowerment and rights of marginalized youth in India building their leadership and building awareness about Constitutional Rights.

Apart from that, Manjula is involved with the National Campaign on Dalit Human Rights. She also served as a member of the executive group of the International Dalit Solidarity Network and the Secretary of the Executive Committee of the National Center for Advocacy Studies, India. She also represents issues facing Dalits and Dalit women in international forums, such as the United Nations and the European Union.