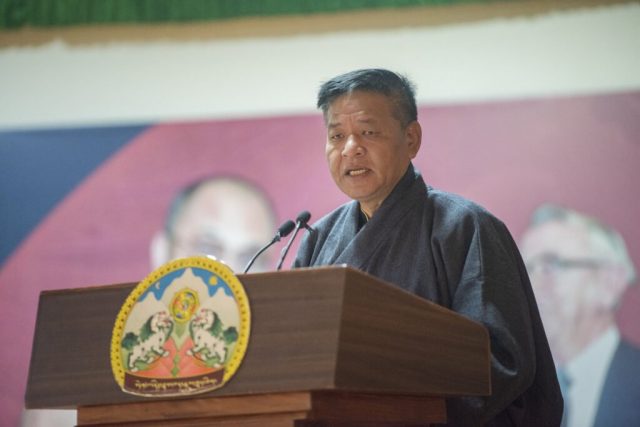 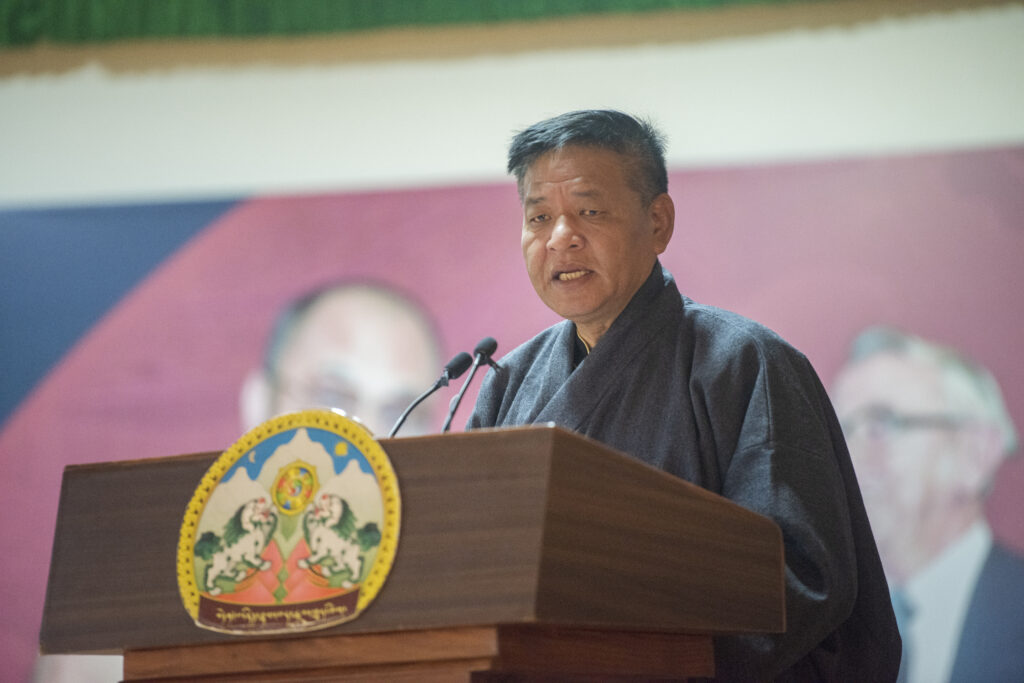 Today marks the 32nd anniversary of the conferment of the Nobel Peace Prize on His Holiness the Great 14th Dalai Lama. On this momentous occasion, the Kashag on behalf of Tibetans in and outside Tibet, pays its immense gratitude to His Holiness and implore him to continue his meritorious services for aeons. We also extend our warm greetings to the Tibetan people.

On 5 October 1989, the Norwegian Nobel Committee announced its decision to award the Nobel Peace Prize to His Holiness the 14th Dalai Lama. In the press release, the Nobel Committee said that “it wants to emphasize the fact that His Holiness the Dalai Lama in his struggle for the liberation of Tibet consistently has opposed the use of violence.” And that His Holiness has “instead advocated peaceful solutions based upon tolerance and mutual respect in order to preserve the historical and cultural heritage of his people.” The Committee further observed that His Holiness has “come forward with constructive and forward-looking proposals for the solution of international conflicts, human rights issues, and global environmental problems.”

In accepting the prize, His Holiness the Dalai Lama said the prize is a recognition of the true values of altruism, love and compassion and non-violence, which he practices in accordance with the teachings of the Buddha and the great sages of India and Tibet. His Holiness said he accepts the prize on behalf of the oppressed, those who struggle for freedom and work for world peace, and of course the six million Tibetan people inside Tibet who have suffered and continue to suffer so much. His Holiness also said he accepts the prize as a tribute to the man who founded the modern tradition of non-violent action for change – Mahatma Gandhi – whose life taught and inspired him.

His Holiness the Dalai Lama’s philosophy of love and compassion results from rigorous study, training and practice since his childhood. One can feel the immeasurable depth of his compassion through His Holiness’ ‘Words of Truth’, which he composed on 29 September 1960, barely a year and a half after coming into exile. In the ‘Words of Truth’, instead of harbouring hatred and enmity against the invaders of our country, His Holiness the Dalai Lama writes that their cruel actions done out of delusion are objects of compassion, and prays that they “achieve wisdom to abide in the glory of friendship and love.”At a time when the whole of China, including Tibet, was in the throes of the disastrous Cultural Revolution, His Holiness the Dalai Lama in the Tibetan National Uprising Day statement of 10 March 1971 said that “in spite of the fact that we Tibetans have to oppose Communist China I can never bring myself to hate her people” and that hatred is weakness and anything achieved through hatred can neither be lasting nor binding. His Holiness asks how can we hate the Chinese whose minds are governed by their leaders and how can we hate the leaders who have themselves in the past been so persecuted and suffered so much for their nation.At the same time, His Holiness the Dalai Lama laid the foundation for preserving and developing the Tibetan religion, culture and education, and sustaining livelihood of the Tibetans. His Holiness democratized the exile Tibetan governance and consistently appealed for support from the concerned countries and the United Nations to resolve the Sino-Tibetan conflict. The adoption of non-violence and mutually-beneficial means of dialogue with the Chinese government to resolve the Sino-Tibetan conflict in 1973 led to the establishment of contact with China and subsequent visits of Tibetans to meet their relatives in and outside Tibet and dispatch of a series of fact-finding delegations to Tibet.

In his letter to China’s paramount leader Deng Xiaoping on 23 March 1981, His Holiness the Dalai Lama wrote that “we must improve the relationship between China and Tibet as well as between Tibetans in and outside Tibet. With truth and equality as our foundation, we must try to develop friendship between Tibetans and Chinese through better understanding in the future. The time has come to apply our common wisdom in a spirit of tolerance and broad-mindedness to achieve genuine happiness for the Tibetan people with a sense of urgency.” Consequently, four fact-finding delegations and two exploratory missions were dispatched to Tibet. Although no meaningful solution to the Sino-Tibetan conflict came out, these efforts had significant influence on the Chinese government to adopt liberal policies on the revival of Tibetan religion and culture and language, and improvement in Tibetan people’s standard of living in Tibet.

His Holiness the Dalai Lama began his foreign visits with Southeast Asia in 1967, Europe in 1973, North America in 1979 and to most of the free countries from 1980. Although the visits’ objective was non-political issues like religion and culture, His Holiness made tireless efforts to seek resolution of the Sino-Tibetan conflict through dialogue and create a strong basis that Tibetan Buddhism and culture have the potential to bring peace and happiness to humanity. His Holiness made the promotion of secular values such as altruism, love, compassion, non-violence, peace and harmony among societies and nations his life-long commitment. These efforts won great admiration and support of the people across the world.

On 21 September 1987, His Holiness the Dalai Lama presented the Five-Point Peace Plan including his vision to transform Tibet into a zone of peace at the U.S. Congressional Human Rights Caucus. His Holiness reiterated his sincere belief in the process of dialogue with an open mind and desire to resolve conflicts. Similarly, in his Strasbourg proposal at the European Parliament on 15 June 1988, His Holiness the Dalai Lama urged the Chinese government and the leadership to give serious and substantive consideration” to his proposal, and that only dialogue and a willingness to look with honesty and clarity at the reality of Tibet can lead to a viable solution. His Holiness expressed his wish to conduct discussions with the Chinese government and hope that China will respond accordingly to the proposal made in a spirit of reconciliation.

The basis of these two proposals was not to revive demand for independence of Tibet. Rather the proposals are aimed at transforming Tibet into a zone of peace which is in the larger interest of entire humanity. As such the Nobel Committee rightly recognized that “His Holiness the Dalai Lama has come forward with constructive and forward-looking proposals for the solution of international conflicts, human rights issues, and global environmental problems.”

These two proposals came amid a period of slight liberalization in China and the opening up of China and Tibet to foreign tourists. Viewing with suspicion a series of proposals made by the exile Tibetan administration to send trained teachers from the exile community to Tibet, open a liaison office in Lhasa, dispatch fact-finding delegations and exploratory missions to Tibet, the Chinese government responded to these overtures by showing gestures to engage in dialogue and conduct talks at any place and time convenient to His Holiness the Dalai Lama. The Tibetan side proposed Geneva as the venue and January 1989 as the date for the talks. However, the talks could not take place due to various pretexts given by China. During the course of these developments, large-scale demonstrations broke out in Lhasa on 27 September 1987, 1 October 1987 and 5 March 1988, which were brutally suppressed by the Chinese government and eventually martial law was declared for the first time in Lhasa on 7 March 1989. With the sudden death of the 10th Panchen Lama in 1989 and the suppression of the 4 June Chinese students’ democracy movement in Tiananmen Square, the brief period of liberalization came to an end.

The conferment of the Nobel Peace Prize on His Holiness the Dalai Lama strengthened the determination and courage of Tibetans inside Tibet, and helped Tibetans in exile find a new approach on the international stage. It has built a solid foundation and an unending well-spring of support for the issue of Tibet among the Chinese intellectuals and the international community. It also helped create a valid basis for Middle-Way Approach as the lasting means to resolve the Sino-Tibetan conflict.

A remarkable initiative of His Holiness the Dalai Lama which drew the world’s admiration was his groundbreaking week-long meeting with western scientists in Dharamsala in October 1987. Establishing a basis that science and Buddhism share common aim for the benefit of the humanity, it has built a bridge between Buddhist science and modern science, leading to the meeting between world renowned scientists and His Holiness the Dalai Lama in 33 Mind and Life conferences till 2019.

Although we are able to celebrate today’s joyous occasion, Tibetans inside Tibet don’t even have the freedom to keep a photo of their most revered leader His Holiness the Dalai Lama. Today is also the World Human Rights Day and as the day is observed around the world, Tibetans in Tibet are denied the basic rights and freedom of expression, learning and practising their own language, religion, movement, and assembly. Moreover, they have to continuously suffer under the Chinese government’s repressive policy to annihilate the Tibetan people’s identity and destroy Tibet’s natural environment.The Chinese government’s policy in Tibet are harmful rather than beneficial to both Tibet and China, and therefore it is bound to fail. We are firmly committed to make efforts to resolve the Sino-Tibetan conflict through dialogue with the Chinese government based on the Middle Way Approach. Until the Sino-Tibetan conflict is resolved, we will carry out international campaigns to seek support for the Tibetan cause. We will soon submit a document to the Chinese government to end or rectify its wrong policies in Tibet.

The Kashag calls on every Tibetan especially youths living in the free countries to actively engage in our recently launched Voluntary Tibet Advocacy Group (V-TAG) campaign and contribute their abilities and skills to make the truth of Tibetan cause prevail. It is the most important duty of the Tibetans in exile under the Charter to make every effort until the Sino-Tibetan conflict is resolved. Hence, we believe that the Tibetans will take part in the V-TAG campaign. As His Holiness the Dalai Lama has always said Tibetans in exile have the duty to act as the free spokesperson of Tibetans in Tibet.

Taking the opportunity, I extend my warm greetings and deep gratitude to India, the United States and other governments, Tibet Support Groups and friends for their unwavering support for the cause of Tibet.

Finally, I pray for the long life of His Holiness the Dalai Lama, the apostle of world peace. May all of the wishes of His Holiness be fulfilled and may peace prevail over the world.

This is an English translation of the statement issued in Tibetan. If there is any difference between this and the Tibetan original, please treat the latter as authoritative and final.