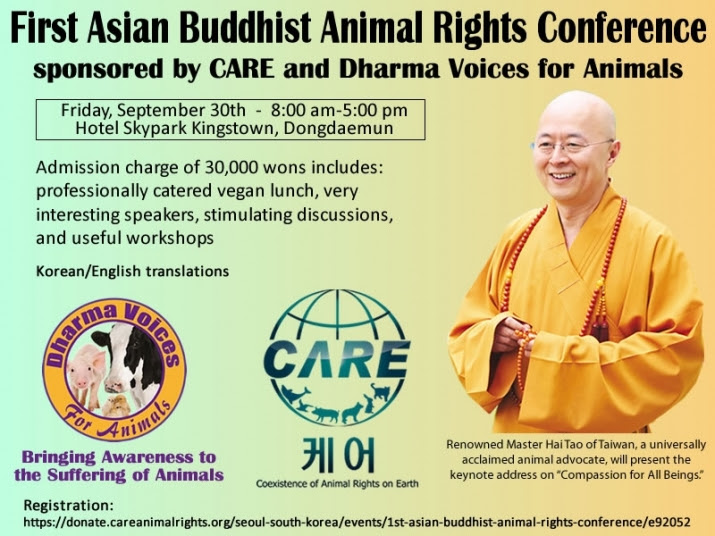 From dharmavoicesforanimals.org
The Venerable Hai Tao was born in Kaohsiung, Taiwan, in 1958. He graduated from Chinese Culture University of Chinese Culture in 1982. He was born in a family with traditional Chinese faith, but he encountered Christianity when he was in middle school and was a pious Christian until university. After having established a family and his own business, he also encountered Taoism.

On 30 September, hundreds of Buddhist monastics, lay practitioners, and veterinarians from around the world attended the 1st Asian Buddhist Animal Rights Conference at Hotel Skypark Kingstown, in the Dongdaemun commercial district of Seoul. The event immediately followed the 28th World Fellowship of Buddhists Conference in the same city held from 26–30 September.

The keynote speech, titled “Compassion for All Beings,” was given by the renowned Buddhist monk Venerable Master Hai Tao from Taiwan, who is also a vegan advocate. “Our greatest evil currently is that every day we are involved in a feud with animals, such as killing and consuming fish, shrimp, crab . . . on a daily basis. It is only when we fall ill one day or when we are grieving for our own ill or dying child do we realize the pain that animals endure,” Ven. Hai Tao told the Dharma Voices for Animals (DVA) website.

Co-hosted by DVA and the Coexistence of Animal Rights on Earth (CARE), the event was one of the world’s few Buddhist animal rights conferences. Both organizations aim to raise awareness about the plight of animals in the global livestock industry through meetings with various constituents, producing films, conducting regular animal welfare and rights workshops, and lecturing at colleges and schools.

Panel topics at the conference included implementing humane animal control methods, spaying and neutering animals, animal experimentation, animal agriculture, and promoting plant-based nutrition. Two workshops were conducted at the conference, the first was on “Advancing the Cause of Animal Rights in the Buddhist Community,” and the second was on “Living Kinder and Eating Kinder—using what was learned at the conference for the welfare and happiness of all beings.”

Among the event’s speakers was Sri Lankan Buddhist veterinarian Dr. Chamith Nanayakkara, who is also the leader of DVA’s Sri Lanka chapter. He presented a paper entitled: “Importance of Implementing Humane Animal Control Methods in the 21st Century.” Dr. Nanayakkara and his team have helped more than 50,000 animals in Sri Lanka. DVA president Bob Isaacson gave a speech titled, “Buddha’s Teachings on Sentient Beings and How We Can Live Kinder.”

Founded five years ago, DVA has 25 chapters in nine countries. Its mission is based on several core teachings of the Buddha, including the First Precept, the Noble Eightfold Path, and the principles outlined in the Karaniya Metta Sutta. Isaacson stated on the website that DVA’s objective is “to give voice to the suffering of animals and draw the attention of Buddhists and Buddhist countries to their plight and recommend measures to eliminate or reduce their suffering. It will support the enactment and/or updating of animal welfare legislation in Buddhist countries.” DVA does this by bringing together like-minded people in local communities, and acting as a grassroots agent to raise awareness to the suffering of animals within their Buddhist communities.

Founded in 2002, CARE is the largest animal rights organization in South Korea. It campaigns against all forms of animal exploitation, including factory farming, the production and selling of dog meat, vivisection, whaling, and the fur industry. It provides animal welfare lectures to schools all over South Korea through partnering with the Korean Red Cross and the government.

The organizers said that the conference was a starting point and that they planned to hold more in the coming years.

In formulating this policy, the Buddha settled on the middle way, allowing monks to eat leftovers, since no additional animals would be harmed, but prohibiting them from eating meat if the animal was killed for them. The key principle was that in eating meat, the monk should not cause additional suffering.