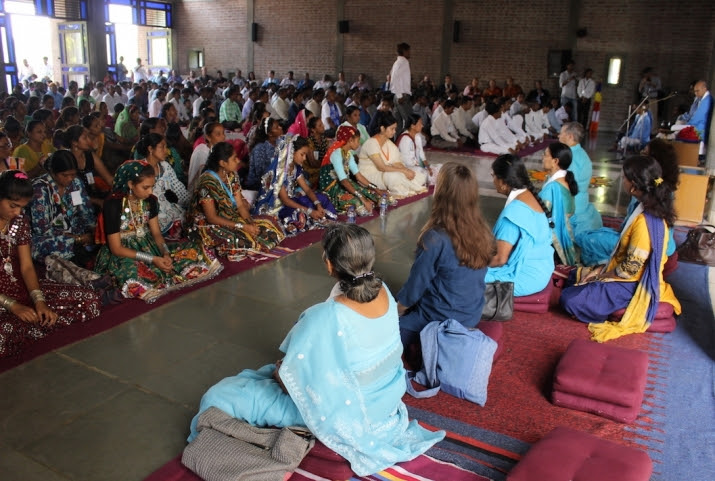 Refuge ceremony for 120 Indians. Image courtesy of the author
At the Yeola conference in 1935, prominent Indian leader and first law minister B. R. Ambedkar declared that he would not die a Hindu, saying that it perpetuates caste injustices. Ambedkar was approached by various leaders of different denominations and faiths. Meetings were held to discuss the question of Dalits and the pros and cons of conversion.

Buddhist conference is taking place this week at  Nagpur in celebration of the Indian scholar, social activist, and reformer Dr. Bhimrao Ramji Ambedkar (1891–56), who helped convert some 500,000 people to Buddhism in a single day.

The conference, titled “Social Engagement and Liberation” and which runs from 11–14 October, has attracted Buddhist teachers, activists, and scholars from all over the world and from many different Buddhist traditions. Significantly, the conference is being held close to the site of the original mass conversion led by Dr. Ambedkar that took place in October 1956. These Buddhist leaders and social activists have come together to work for a more democratic society founded on the principle that all human beings deserve respect.

Outside of India, most people have not heard of this man who transformed Indian society during the first half of the 20th century and is now responsible for an estimated 40–50 million people currently practicing Buddhism in India. The people that Dr. Ambedkar helped to liberate are often known as “untouchables”—people outside the Hindu caste system, who exist at the bottom of an oppressive social hierarchy. These so-called untouchables are restricted to working in what are considered the “lowest” of occupations (trash collection, carcass removal, manual sewer cleaning) and they are encouraged work hard in order to be reborn in more favorable circumstances in their next life. 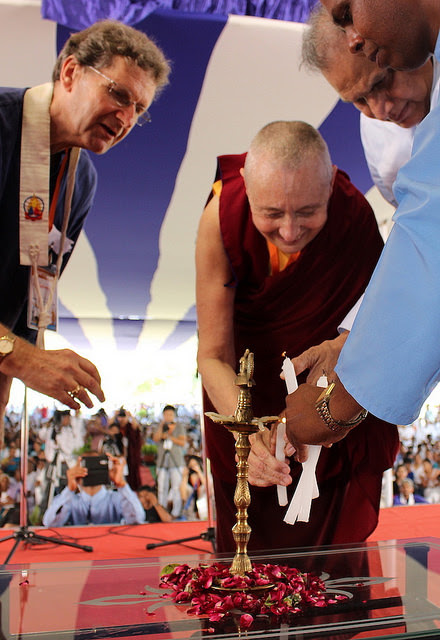 Dhammachari Lokamitra, Jetsunma Tenzin Palmo, and Prof. Sukhdev
Thorat light candles for the opening of the conference. Image courtesy
of the author

Dr. Ambedkar, who was also the architect of India’s first constitution and a leading advocate for women’s equality, challenged this centuries-old oppression. In Nagpur, he is celebrated as a great figure who led millions of people out of the hellish conditions imposed by the caste system. Dr. Ambedkar has also inspired many people to social activism. One person who accepted this challenge is Dharmachari Lokamitra, a British-born Buddhist monk who was asked by his Buddhist teacher in the early 1970s to travel to India to help Indians manifest Dr. Ambedkar’s vision of revitalizing Buddhism in the country of its origin. Lokamitra has worked tirelessly for decades to create a training center—the Nagaloka Institute—which is helping young Indians learn about Buddhism and community building. So far, he and a dedicated group of teachers have trained more than 1,000 Indians who are now spread throughout the country working for this cause.

The conference is co-hosted by the International Network of Engaged Buddhists, a Thailand-based organization that connects engaged Buddhists around the world with the aim of addressing concerns with environmental, human rights, and conflict resolution, and the Deer Park Institute, a center for the study of classical Indian wisdom traditions based in northern India. The goal of the forum is to bring together some of the brightest men and women in the global Buddhist community to support and encourage Buddhist study and practice in India, and to create communities that are built around Dr. Ambedkar’s vision of a society based on liberty, equality, and fraternity.

Closing ceremony of the first day of the conference. Image courtesy of the author

Dr. Ambedkar, popularly known as Babasaheb, was an Indian jurist, economist, and politician, and a prolific scholar and social reformer. He inspired the modern Buddhist movement in India and campaigned against social discrimination against women and India’s “untouchable” Dalit caste. He was the principal architect of India’s first constitution and in 1955, founded the Buddhist society of India. Shortly before his death, Ambedkar completed his final book, The Buddha and His Dhamma, an English-language treatise on Buddhism and the Buddha’s life, which was published posthumously.The Buddhist movement was somewhat hindered by Dr. Ambedkar’s death so shortly after his conversion. It did not receive the immediate mass support from the Untouchable population that Ambedkar had hoped for. Division and lack of direction among the leaders of the Ambedkarite movement have been an additional impediment. According to the 2001 census, there are currently 7.95 million Buddhists in India, at least 5.83 million of whom are Buddhists in Maharashtra.This makes Buddhism the fifth-largest religion in India and 6% of the population of Maharashtra, but less than 1% of the overall population of India.