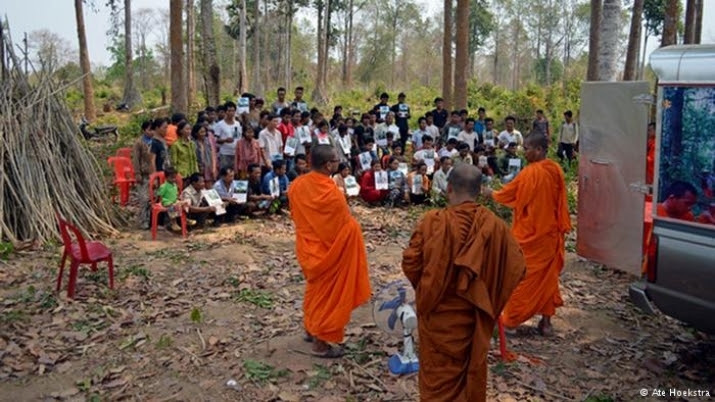 Buddhist monks collecting images and videos of illegal logging to spread them through social media. Photo from Dw.com

Cambodia has one of the highest rates of deforestation in the world, third to only Nigeria and Vietnam, according to a 2005 report conducted by the Food and Agriculture Organization of the United Nations (FAO)

Deforestation remains a major threat to Cambodia’s forests, but a group of Cambodian Buddhist monks from the Independent Monk Network for Social Justice is battling to save these forests by lobbying lawmakers to protect them and by publicly exposing illegal logging.

Venerable Buntenh, founder and leader of the network’s approximately 5,000 monks, teaches local people to use social media such as Facebook to raise awareness of illegal logging by uploading photos on Facebook, posting videos, and writing articles. The monks also teach locals how to halt deforestation. “No one has told me that I should go out there to protect the forest, but for me it was a logical thing to do. I am doing all I can to save it. I plant new trees, I help the people who live from the forest, I am reminding the government of the promises they’ve made,” said Ven. Buntenh. (Deutsche Welle)

The human rights organization Licadho from the University of Maryland in the US has pointed out that 14.4 per cent of Cambodia’s jungle disappeared between 2000 and 2013, 12.2 per cent of which were cut down in protected areas—an ongoing trend that has led to harmful effects for human beings, animals, and the climate.

Ven. Buntenh also noted that one of Cambodia’s largest and oldest evergreen woodlands, Prey Lang, is under threat. Large parts of Prey Lang have already disappeared to make space for plantations, and land concessions and illegal loggers have removed large patches of trees in protected areas. “The people who cut down the forest think they are superior, but in reality they are stupid. Only the forest is superior,” he said. (Deutsche Welle)

According to Ven. Buntenh, 30 yers ago, jungles and centuries-old trees that provided shade and shelter to wild animals, the air was clean, and nature provided local residents with considerable resources to live on. The forest near Ven. Buntenh’s childhood village was once filled with wild pigs. “We were hunting them. During my youth, there was nothing as tasty as the meat of a wild pig,” Ven. Buntenh recalled, laughing. (Deutsche Welle) 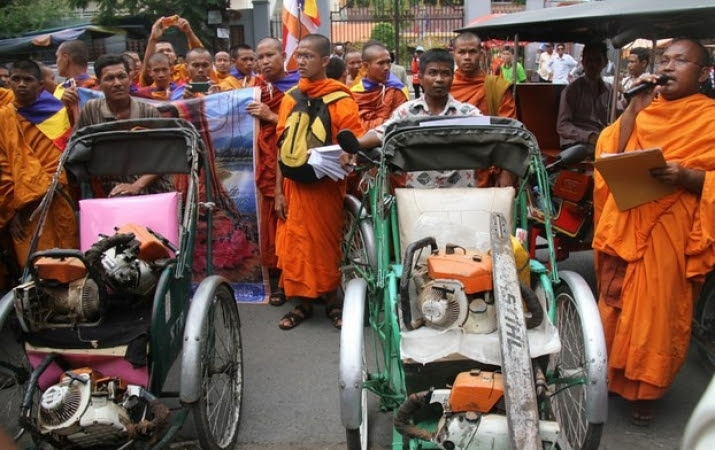 Activists carry confiscated chainsaws as part of a protest in front of Forestry Administration office in Phnom Penh, on 6 July, 2015. Photo from Rfa.com

Today, the forests of Ven. Buntenh’s youth are long gone, and their loss grieves him. He urges local residents to put an end to illegal logging in Cambodia during the frequent occasions when they come to the forest and listen to the monks talk about the effects of deforestation. “We must speak out when someone is abusing our rights,” he told a crowd on 7 July. “The authorities think bad about us, but we are the ones that help you to save the forest. Do you know how Facebook works? You have to use it to tell what’s happening here.” (Deutsche Welle)

Yet the situation may not be completely hopeless: “In Cambodia, where over 90 per cent of the population is Buddhist, monks enjoy great respect. Their orange and red robes offer them protection that other activists lack. The authorities are also unlikely to easily use force against them, and the monks use this freedom to collect images and videos of, for example, illegal logging and brutal police violence. These are then spread through social media.” (Deutsche Welle)

However, Ven. Buntenh has accused prime minister Hun Sen, who has governed Cambodia since 1985, of delaying promises to halt deforestration. Over the past few years, several activists and journalists have been intimidated or even killed for reporting on illegal logging. Similar threats were made on Ven. Buntenh’s life some time ago. “I don’t think I’m a good monk, because I am mean to the police and to the military,” he said. “But I’m ready to give everything for my people and the forest. If I have to give my life for it today or tomorrow, then I’m willing to make that sacrifice.” (Deutsche Welle)  The Cambodian government has struggled to enforce environmental regulations in the face of corruption and illegal activities, it has shown interest in reducing deforestation and setting up protected areas. On paper, more than 20 percent of Cambodia is under some form of protection, including the spectacular ruins of Ankor, which cover over some 400 square kilometers and are one of the most important archaeological sites in Southeast Asia. However, even this World Heritage site is threatened by unrestrained tourism, experienced rapid hotel development in the early to mid 2000s.