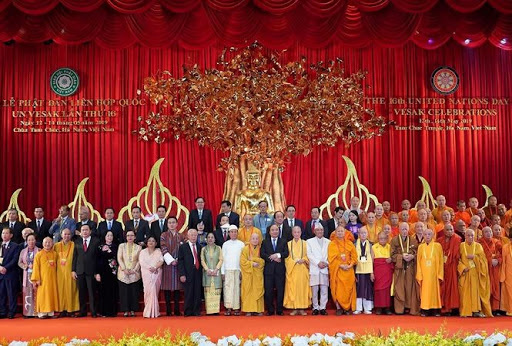 Participants of the 16th United Nations Day of Vesak celebrations in Vietnam last year. From baonhandao.vn

In light of the uncertainties and risks associated with the growing international COVID-19 outbreak, the International Council for the Day of Vesak (ICDV) has decided to cancel the upcoming 17th United Nations Day of Vesak event, an international observation of the Buddha’s birth, enlightenment, and mahaparinirvana, which was scheduled to be held in Thailand in May.

“Due to the recent outbreak of the Coronavirus Disease 2019 (COVID-19), the World Health Organization (WHO) has declared the disease a ‘Public Health Emergency of International Concern,’ and the Thai Ministry of Public Health, on 26 February 2020, has designated it as a dangerous communicable disease.” The ICDV stated in a letter dated 6 March and widely shared on social media.

“For these reasons, the Thai Sangha Supreme Council, on 28 February 2020, issued Resolution No.137/2563 on preventative measures against the spread of Coronavirus Disease 2019 (COVID-19). Item No.4 states: ‘Ecclesiastical chief officials should consider desisting from or postponing inviting any person from abroad to join in Sangha meetings or activities in Thailand.’

“Taking this situation into consideration, the International Council for the Day of Vesak has decided to cancel the 17th United Nations Day of Vesak event in 2020 that was to be hosted in Thailand.”

The letter is signed by Ven. Prof. Dr. Pra Brahmapundit, a member of the Thai Sangha Supreme Council and president of the International Council for the Day of Vesak. At the time of writing, global coronavirus infections were reported to total 114,186, with 4,019 deaths so far confirmed. The majority of coronavirus infections and fatalities have occurred in mainland China, which has reported a death toll of 3,136 people and a total of 80,754 infections, according to official data from the Chinese health authorities. Official figures in Thailand show 50 infections and one fatality linked to the outbreak. COVID-19 is believed to have first spread from an illegal wildlife market in the Chinese city of Wuhan, in central Hubei Province. The World Health Organization has estimated the mortality rate from the virus at 2–5 per cent, with the elderly and people with underlying health conditions considered most at risk.

Vesak, also known as Buddha Purnima (or more informally Buddha’s Birthday), commemorates three key events in the life of the historical Buddha, Shakyamuni, that represent the birth of Buddhism: the birth, enlightenment (Skt: sopadhishesa-nirvana), and passing from this world (Skt: mahaparinirvana) of Shakyamuni Buddha. The occasion is a public holiday in many countries in Asia and is celebrated by millions of Buddhists across the world. It is traditionally observed on or around the date of the full moon in the month of May, which this year falls on 6 May.

The UN General Assembly officially recognized Vesak Day as an international observance on 15 December 1999, aiming to honor the Buddhist values of wisdom, compassion, and tolerance as a mean to foster world peace. The first official celebration was held at the UN headquarters in New York in 2000.

Thailand has so far hosted the United Nations Day of Vesak summit 11 times, most recently on 24–27 May 2018, under the theme “Buddhist Contribution for Human Development.”* Last year, the 16th United Nations Day of Vesak celebrations were hosted in Vietnam from 12–14 May under the theme “Buddhist Approach to Global Leadership and Shared Responsibilities for Sustainable Societies.”**

In Thailand, the Day of Vesak was first celebrated during the Sukhothai period (1249-1438 CE). It is believed to have been introduced from Sri Lanka where the festival, according to the Mahavamsa chronicle, was instituted around 2,100 years ago in the reign of King Dutthagamani, who instituted the celebration of Vesak day twenty-four times (Mahavesakhapuja ca catuvisati garayi). In the Sukhothai period, Thailand had a very close religious connection with Sri Lanka. Sri Lankan monks came to Sukhothai to propagate Buddhism and brought with them the practice of Visakha Puja, the Day of Vesak festival.

“In a time of growing intolerance and inequality, the Buddha’s message of non-violence and service to others is more relevant than ever,” UN Secretary-General António Guterres has said. (United Nations)