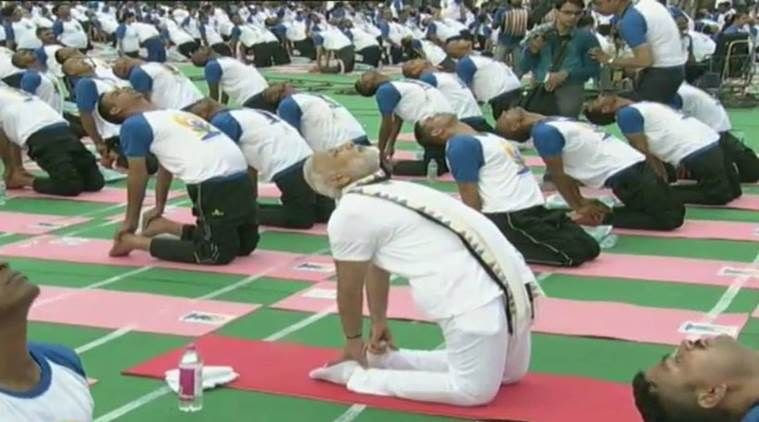 “Yoga is not about the other life. Therefore, it is not a religious practice. It is the science of this world, it is about what we will get in this life,” Modi said, speaking at the Capitol Complex in Chandigarh.

The prime minister said yoga was for both believers as well as non-believers as he urged people to embrace the practice for better physical and mental health.

Yoga, he added, helped people to lead a disciplined life.

Simultaneously, hundreds of thousands across the country began the day with yoga exercises.

The prime minister later got down from the stage from where he addressed the gathering to shake hands with specially-abled yoga enthusiasts before joining others in performing some deep breathing and stretching exercises.

He said the International Yoga Day had become a mass movement like no other in the world.

The UN in 2015 declared June 21 as the International Day of Yoga.

Donning T-shirts and track-pants, yoga enthusiasts, shortlisted to perform yoga, began lining up around the spruced up complex around 4 a.m. on Tuesday.

Over 96,000 people had registered themselves to take part in the event. Of this, over 30,000 were picked, including 10,000 each from Chandigarh, Punjab and Haryana.

These included school and college students, youths, elderly, specially challenged, security personnel and yoga activists. Those taking part in the event have been training for the past 15 days.

Unprecedented security was in place around the venue in Chandigarh’s high-security area of Sector 1. The area was sealed off by paramilitary commandos and security agencies ahead of the event.

The Capitol Complex, one of the acclaimed creations of Chandigarh’s founder-architect French architect Le Corbusier, wore a new look with the concrete floor covered with a green carpet.

Besides the main event, yoga day was held at 100 other locations across Chandigarh.